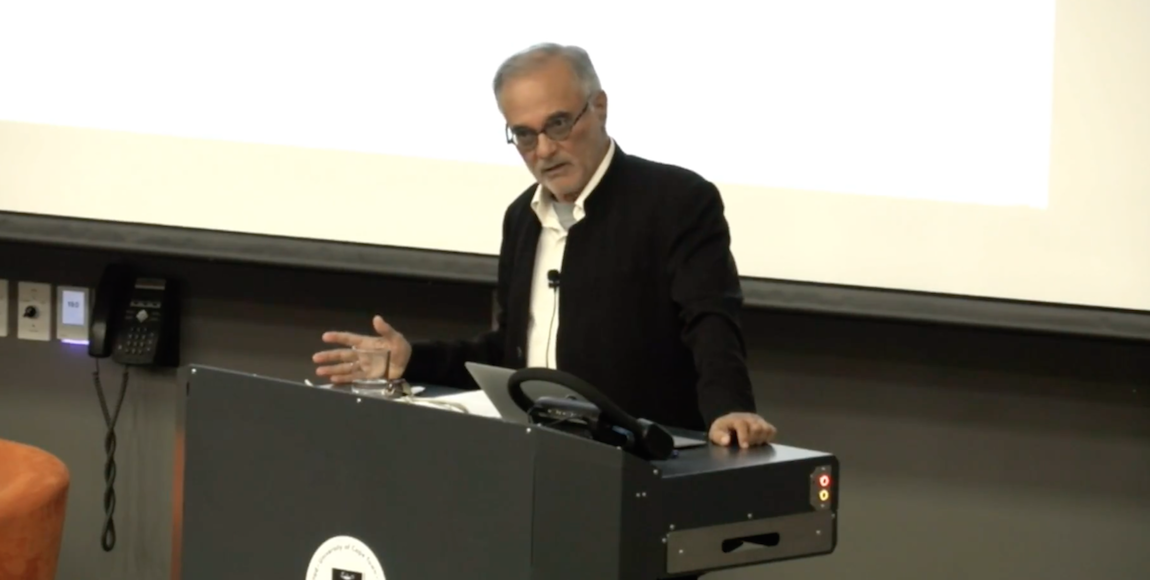 On Tuesday celebrated decolonial scholar Mahmood Mamdani returned to UCT, an institution he once accused of becoming â€œa new home for Bantu educationâ€. After refusing to set foot at UCT, he returned 16 years later to give the TB Davie Memorial lecture on academic freedom. Here are five key points that the Daily Vox learned from Mamdaniâ€™s lecture on decolonising universities.

1. Mamdani only returned to UCT because Rhodes fell and birthed the decolonisation project

In the mid-90s Mahmood Mamdani was the AC Jordan Professor of African Studies at the University of Cape Town and the director of its Centre for African Studies. He was suspended after challenging the university for rejecting his â€œProblematising Africaâ€ syllabus, which questioned the Eurocentric nature in which Africa was studied in universities. The scandal, which came to be known as the Mamdani Affair, is famous in higher education communities for illustrating the repression of academic freedom at an institution that claimed this as one of its highest values. Mamdani eventually left UCT and refused to return to the institution until this seminar. He made his motivation for returning very clear.

“Somebody asked me, you’ve been away from UCT for 16 years, why now did you decide to come? I said because Rhodes fell,â€ he told the audience.

Students in the lecture venue pushed for UCT administrators to apologise to Mamdani for the universityâ€™s past transgressions, but current vice chancellor Max Price did not offer any apology on behalf of the institution. Some students did not take kindly to Priceâ€™s attitude.

â€œIt is not surprising that Dr Price will not apologise to you. We will wait for another 40 years as they did to AC Jordan, another many years as they did to [Archie] Mafeje, Â to acknowledge the institutional and systemic racism that black people suffer at the hands of white people. Max Price, you are morally bankrupt!â€ said student activist Chumani Maxwele.

2. Modern African universities are built on a European model intended to colonise the minds of students and perpetuate a Eurocentric vision of society

Mamdani argued that the African university began as a colonial project. To be â€œcivilisedâ€ was to live by European values, frameworks, norms and sensibilities – the university was the frontline of the colonial â€œcivilisingâ€ mission. The colonial universityâ€™s ambition was to create universal scholars who stood for excellence regardless of context, and who would serve as the vanguard of the â€œcivilisingâ€ mission without reservation or remorse. For Mamdani, decolonisation is the undoing of this process.

â€œIf you regard yourselves as prisoners in this on-going colonising project, then your task has to be one of subverting that process from within. This must be done through a series of acts which sift through the historical legacy, and the contemporary reality, discarding some parts and adapting others to a new-found purpose. In short: decolonisation,â€ said Mamdani.

3. African universities must strive for both relevance and excellence

However compelling, these contrasting visions were grounded in one-sided notions of higher education as either relevant or excellent, he said. The challenge was not to choose one over the other but how to bring the two together.

â€œIf universities could be displaced from politics, if knowledge production can be immune from power relations, then place would not matter – but we know that thatâ€™s not the case. At the same time, ideas also matter. If they did not, why have a university at all? This is to say that politics is not everything,â€ said Mamdani.

4. The way for student movements to secure progressive gains made at universities is to ensure those gains are institutionalised

Mamdani said the only way to ensure the gains achieved by the mass mobilisation of students is to institutionalise them within the university.

â€œIf you do not set up centres while you are here, if you do not get faculty employed, if you do not build into the inertia of the university, if your gains do not show in the annual tallying of accounts and expenses – then you have not institutionalised anything,â€ said Mamdani.

It would be very difficult to secure progress without this, he said, because it would require movements to sustain their levels of militancy and mobilisation, which becomes impossible over long periods.

5. What does it practically mean, then, to decolonise education?

Mamdani answered this question with a practical example of how he teaches at Ugandaâ€™s Makerere University. He requires his PhD students to identify a colonial text that was a foundation and reference point that Western academics would draw from. His students have to understand the language of whom the text spoke of, and are not allowed to graduate unless they have research proficiency in two other languages besides English. He then asks his students to analyse and describe the authorâ€™s assumptions in deciding what information is relevant.

â€œWhat categories is he/she utilising to validate certain information and invalidate other information? And then I say to them, now you use the same information and give me a different narrative than the author. Thatâ€™s decolonisation,â€ he said.

Watch his lecture below: