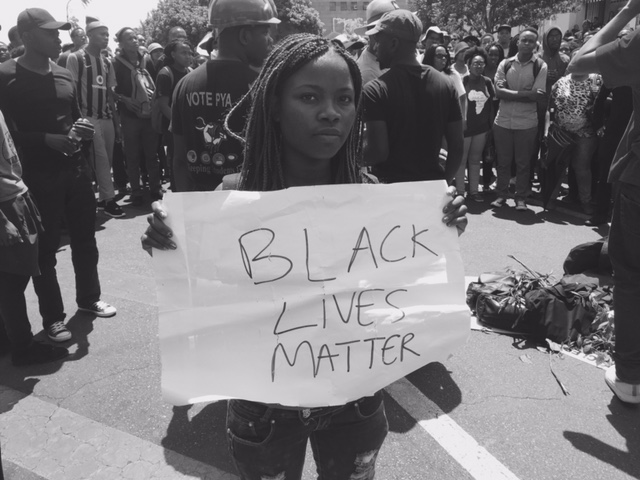 The protests at Wits last week against the proposed 10.5% fee increase saw the university brought to a complete shutdown. The university Council eventually came to an agreement with students which saw, among other things, the suspension of the fee increase. Although the students who took part in the protests were peaceful, it wasnâ€™t all non-violent â€“ AAISHA DADI PATEL rounds up five times the protestors were victims ofÂ violence.

1. The guy who tried to ram through the boom with his motorbike
Many students who arrived by car on Wednesday morning grew frustrated â€“ including this student, who insisted that he be let through on his motorcycle. Students who were protesting were not having any of it though â€“ as you can see here:

2. Bidvest Wits coach Gavin Hunt hitting a protesting student
Hunt reportedly got so frustrated at being denied entry into the university, that he slapped a student blocking his way in. The 2nd year student, Otsile Seaceko, told Times LIVE that the slap left him â€œa bit unconsciousâ€.

3. The angry manÂ who rammed a boom and hit a protester
The enraged student had been trying to get out of Wits for a while. Taking advantage of a moment when protestors who had beenÂ standing at the booms at the Enoch Sontonga entrance moved to the side, he tried to ram through a closed boom with his BMW â€“ and hit a protestor in the process.

BREAKING – a student has attempted to leave by ramming through a boom and knocking down a fellow student #WitsFees pic.twitter.com/ZFfF8TJVAq

4. Police pepper spray and ram students on Empire Road On Friday, after most of the people present at the process had moved up to the Senate House Concourse, two policemen in an unmarked car hurled Afrikaans insults at students and members of Campus Control at the Empire Road entrance to Wits.

5. Pepper spray in the Senate House Concourse
Shortly before the Council meeting convened at 7pm on Friday night, pepper spray was used onÂ crowds of students waitingÂ for the meeting at the Senate House Concourse to begin. Initial suspicion fell on management – who were accused of wanting to prevent the meeting from happening â€“ but the university administration saidÂ the security guard had acted on his own accord after feeling treatened. An asthmatic student was rushed to hospital after inhaling the pepper spray, whileÂ another broke his leg in the chaos.Â Students however remained peaceful.