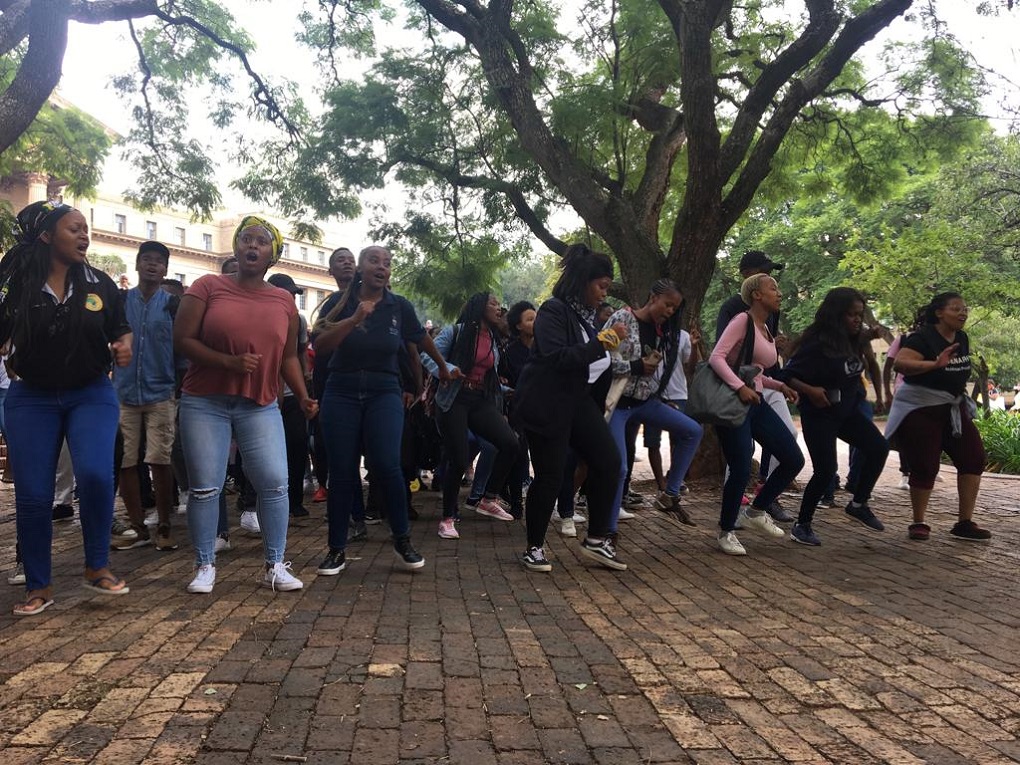 The situation at Wits University is tense on Tuesday morning. There have been clashes between students and private security in Solomon House where students are protesting the backlog in registration and the lack of accommodation. By SHAAZIA EBRAHIM and FATIMA MOOSA.

On Monday the university’s Student Representative Council (SRC) released a statement to say that they would lead students on a hunger strike. The hunger strike is in solidarity with students who have not been allowed to register because of outstanding debt and the lack of accommodation for registered students.

Sisanda Mbolekwa, the SRC president, told The Daily Vox: “The reason we are protesting is because some students have been unable to register due to outstanding debt and some students are sleeping in libraries and toilets.”

Mbolekwa said they gave management two non-negotiable demands which are to allow students to register and to house students.

Students with historical debt are unable to register

Sibongile Sibeko, the SRC’s gender and transformation officer, told The Daily Vox that the strike came out of a meeting the SRC had with management during the last week of January where they discussed the registration fees issue.

Sibeko said the university agreed that students owing less than R100,000 would be allowed to register.

The usual arrangement is that students owing less than R10,000 are allowed to register.

Wits students chose the most peaceful forms of protest, #witshungerstrike and study occupation, and are still being subjected to brutality by private security under Management’s instruction. This doesn’t get reported on. Only destruction of property so students can be villainised

“On Sunday night they told students they wouldn’t be allowed to register,” Sibeko said adding that the university needs to resolve the registration and accommodation issue.

The SRC are firm that they will continue the hunger strike until the university responds to the demands.

Lines of students ring the concourse. We are told that they are all waiting to register #wits #witshungerstrike pic.twitter.com/JvKXQcTRVr

Sibeko said: “The students who are homeless are also hungry. We as the SRC cannot distance ourselves from our students.” She said that is why the students decided to embark on the hunger strike.

“The reason why we didn’t embark on a traditional strike and shutdown is because we have seen the violence and brutality on this campus in previous years. We have tried a different response to see if the management will listen to us.” Sibeko said.

Protests began on February 3, the first day of the 2019 Wits academic year. A group of students led by some members of the SRC disrupted the operations of the Fees and Scholarships Office, the Fees Office and the Student Enrolment Centre before disrupting some lectures on the East and West Campuses.

Students are without accommodation

“We’re protesting because the university is refusing to give students accommodation,” Ramaphakela said. “The reason we’re doing the sleepout is to show the price of accommodation. They’re phasing senior students out of internal residences and feeding them off to external residences which charge exorbitant prices. We’re trying to say that the university must find extra beds for students. There’s a lot of students who are homeless.”

The Daily Vox witnessed a number of scuffles that broke out when unarmed students antagonised private security on Tuesday.

But Ramaphakela said private security had been brutalising students since 07:00 when the protest began.

“Look at my shoes,” he said pointing to his sneakers which had begun tearing at the sole. “They damaged our clothes. They pushed us towards the end of the concourse. But then we came back. Even now they’re trying to impose brutal measures to push us out of the space,” Ramaphakela said.

Gabisile Cele, a third-year chemical engineering student, reported that she was sexually assaulted by private security.

“While we were demonstrating they told us they were allowing ladies to pass,” Cele said in an interview with The Daily Vox. “As I was passing they said they’re not taking any more and they pushed us back in. While they’re pushing us in, one of them was busting touching my belly: rubbing it, pinching it,” she said pointing at her crop top.

“I’m asking him, – why? What gives you the right to touch me? Who do you think you are touching me like that?” Cele said.

The security guard ran away. Cele said the head of security did not handle her case well when she tried to report it. He directed to a campus building, instructing her to write a statement so an investigation can follow. “How am I going to write a statement? I don’t even know the person,” she said.

Another of her friends was bruised on her breast from where a private security member groped her.

Protests have been taking place as campuses in KwaZulu Natal about the late payment of student fees.

Mbolekwa said: “We are also in solidarity with all the other campuses because our struggle is theirs. We are one and the same.”

The university said in a statement that the two demands from students cannot meet if the University is to remain financially sustainable. The University has set up a Wits Hardship Fund worth R12 million which is being allocated to students who are in urgent need of assistance.

The university also said they will be taking action against students who disrupted classes on Monday.

“These students will be held to account in line with the University’s policies, procedures and rules, which may include suspensions.” said the university in their statement.