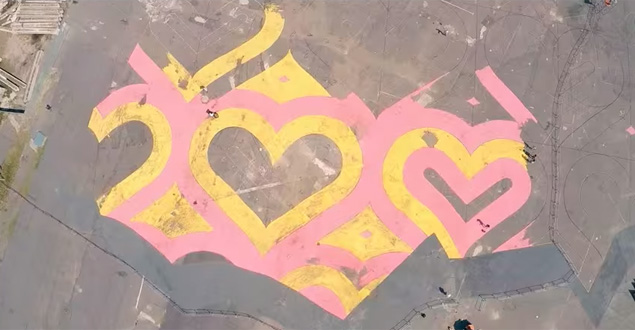 Digital art is pushing the boundaries of what artists can do and how they do it. UK-born artist INSA has taken his work to new heights â€“ literally. His latest GIF was created using satellite imagery.

It took four days for INSA, who dabbles in the art of GIF-iti, to paint four massive murals, covering 57,515m2 of real estate in Rio de Janiero, Brazil. Each painting was then photographed from a satellite in space (we kid you not), and meshed together into a one-second GIF that has now broken the record for the largest animated painting ever. Thatâ€™s what happens when your painting can be seen from space.

â€œThe Internet has changed our views on art and I wanted to cross both worlds, and make work that existed in online space even more than it existed in the real space,â€ INSA says in a video about the making of the gif.

But critics say the work is â€œcontrivedâ€ and â€œnothing more than an advertising stuntâ€ â€“ the project was sponsored by alcohol brand Ballantineâ€™s, which profiled INSA for its series, the Stay True Story.