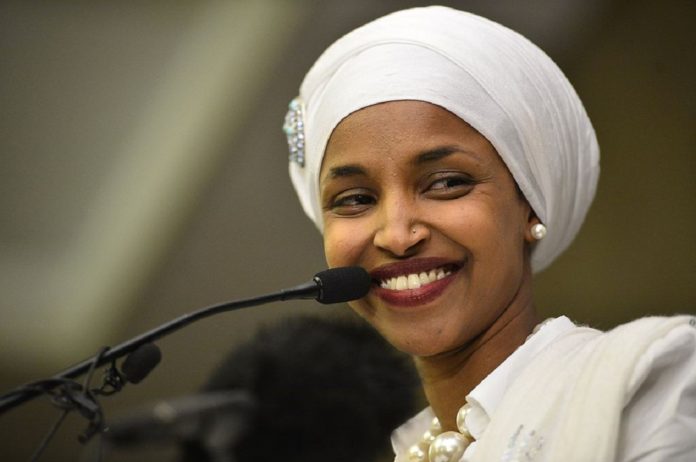 United States congresswoman Ilhan Omar has been through the most, but she won’t be deterred. Despite United States President Donald Trump’s racist attacks against her, Omar is defending the pro-Palestinian boycott, divestment and sanctions (BDS) movement against Israel.

On Tuesday, House Democrats today backed a resolution to condemn Trump’s racist tweets against four congresswomen. Omar, who is a Somali-American and practicing Muslim, was elected to Congress, representing Minnesota, in 2018. She, along with Reps. Alexandria Ocasio-Cortez (New York), Ayanna Pressley (Massachusetts) and Rashida Tlaib (Michigan) are members of “the Squad,” an informal group of more liberal Democrats.

Trump tweeted that Omar, Ocasio-Cortez, Pressley and Tlaib should go back to their home countries. All congresswomen were born in the US, except Omar.

Trump called the four “un-American” at a gathering in North Carolina on Wednesday, saying they should leave the US if they didn’t like his policies on issues such as immigration and defence of Israel.

“Tonight I have a suggestion for the hate-filled extremists who are constantly trying to tear our country down. They never have anything good to say. That’s why I say: ‘Hey, if they don’t like it, let them leave. Let them leave,’” Trump said to the crowd, who jeered “Send her back!”

Responding to the Democrat move to condemn his tweets as racist, Trump said he does not “have a racist bone in [his] body”.

Trump also accused Omar of anti-Semitism, and said: “She looks down with contempt on hard-working Americans saying ignorance is pervasive in many parts of this country.”

In the meanwhile, Omar plans to push a bill to support BDS.

Omar introduced a bill affirming that Americans have the right to participate in boycotts on Wednesday.

House Resolution 496 says that boycotts “have been effectively used in the US by advocates for equal rights since the Boston Tea Party and include boycotts led by civil rights activists during the 1950s and 1960s in order to advocate for racial equality, such as the Montgomery bus boycott, and promote workers’ rights, such as the United Farm Workers-led boycott of table grapes.” The resolution also identifies historical moments when Americans boycotted Imperial Japan, Nazi Germany, and apartheid South Africa to forward human rights.

Omar told Al-Monitor that she planned to introduce the bill this week. “We are introducing a resolution … to really speak about the American values that support and believe in our ability to exercise our first amendment rights in regard to boycotting,” Omar said. “And it is an opportunity for us to explain why it is we support a nonviolent movement, which is the BDS movement.”

This resolution probably won’t sit well with the Democratic leadership.

Omar’s legislation doesn’t specifically mention BDS, but coincides with a non-binding resolution — House Resolution 246 — that the Democratic leadership is currently pushing which condemns the BDS movement. This resolution identifies BDS as an impediment to a two-state solution.

Previously, diplomatic efforts to solve the conflict between Israel and Palestine supported a two-state solution. However, pro-Palestinian activism now generally supports allowing the Palestinian people to forge their own solution without forcing a two-state or single-state solution on them.

Currently, Tlaib and Rep. John Lewis (Georgia) are the only two cosponsors of Omar’s bill. Interestingly, Lewis is also a cosponsor of House Resolution 246.

Democratic supporters of the anti-BDS bill claim that the resolution doesn’t impede on First Amendment protections, but critics hold that it will be used by pro-Israel lawmakers to push more aggressive anti-BDS legislation. Tlaib called the resolution “unconstitutional.”

Both Omar and Tlaib, became the first and only lawmakers to support the BDS movement when they were elected last year.

The Republican Party has used their pro-BDS stance as leverage to paint the Democratic Party as anti-Israel. Trump made full use of this in his multiple Twitter tirades targeting both congresswomen.

BDS movement leaders praised Omar’s resolution on Wednesday, declaring it a win for activists. “It reassures us that progressives, including in Congress, are defending freedom of expression and the right of oppressed communities, including Palestinians, to peacefully fight for their rights,” BDS spokesperson Hind Awwad said in a statement.

Given the collapse of formal Palestinian leadership structures supported by the people, BDS remains the main way to mobilise support for Palestinian activism. “That’s mainly through solidarity and leveraging power, from wherever you are all over the world, to further isolate Israel with boycotts, divestments, sanctions. That’s very important work. Sometimes I think that’s the last line we have, given the regional and international dynamics. If it wasn’t for BDS, there wouldn’t be a mechanism to hold Israel accountable to,” Palestinian Youth Movement’s Ramah Awad told The Daily Vox in an earlier interview.

Fighting for the American’s right to support BDS can go a long way for Palestinian activism. But for Omar, it doesn’t come without a cost.

There is nothing scarier than the most powerful man in the world and his supporters directing attacks at you. In the face of the hate and vitriol, Omar’s unwavering commitment to stand for justice —and Palestine — is commendable. Trump and his supporters have continuously attacked various aspects of her identity: that she is black, a woman, Muslim, and a refugee. But still, she does not let anything stop her from doing the work she was elected to do.

The irony is how Trump is using Omar’s pro-BDS stance to call her anti-Semitic when his very premise is racist. Being anti-Zionism is by no stretch of the imagination the same as being anti-Semitic. But attacking a black Muslim woman who dares to stand up to your inhumane policies by telling her to “go back home”, calling her “unAmerican” an “al-Qaeda supporter”, is textbook definition racist.

Since the beginning of the year, Omar’s support for Palestine has led to racist and Islamophobic attacks waged against her. But online, people continue to offer her support using #IStandWithIlhan. Politicians, celebrities and ordinary people have all tweeted using the hashtag to express their solidarity with Omar.

It’s too early to say whether Omar’s bill will win, but for now we know that she won’t back down.