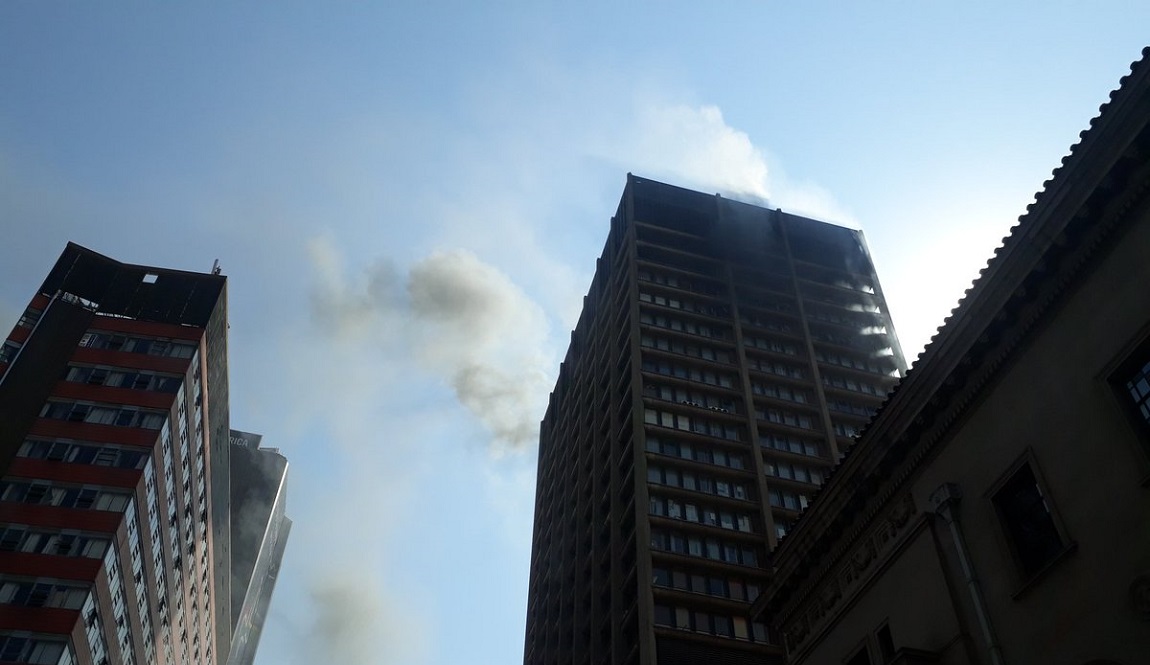 Three firefighters lost their lives on Wednesday while battling a fire that broke out the Gauteng provincial human settlements and cooperative governance building. One of the firefighters fell to his death, while fighting the blaze while the other two succumbed to their injuries.

The National Education, Health and Allied Workers Union (Nehawu) met with the Infrastructure Development MEC on Thursday morning to discuss further actions. This meeting came after the trade union said their members had warned about the fire happening. The trade union says after their discussions, they have told the department no Nehawu-affliated workers will be returning to work until the buildings have been declared safe. Gracia Rikhotso, the provincial deputy general secretary of Nehawu said to The Daily Vox in an interview that additionally no workers will be transferred to another building until those buildings have been declared safe.

The trade union are called for an investigation into the fire and Rikhotso said if negligence is found, heads need to roll and people must be held responsible.

The MEC has called for a separate investigation into the course of the fire.

Rikhotso further said that their members had raised concerns about the building three years ago.

Rikhotso said it is a ticking time bomb that was brewing three years and the provincial government could have taken the necessary steps to prevent this. She says workers could have been moved from the buildings or the risky areas should have been attended to.

â€œWe will not be allowing our workers to go into that building by all means,â€ said Rikhotso.

Reports on Thursday morning were that the fire had reignited according the city of Johannesburgâ€™s emergency services. Surrounding buildings in the area were also evacuated as firefighters tried to contain and stop the fire.

“At this moment, the fire has reignited from the 23rd floor to the 16th floor,” said spokesperson Nana Radebe. “It’s not flames, it’s just smouldering.”

Thirteen people were taken to the nearest hospital for treatment from the building on Wednesday afternoon. The fire broke out on Wednesday morning. It is alleged that the fire was caused by an electrical fault which broke out on the 23rd floor of the building. However, further investigations will be taking place to ascertain the cause of the fire.

During a press briefing by the Gauteng MEC for Infrastructure Development, Jacob Mamabolo, the MEC said the building regulations were at fault.

“At this point, we are not aware of what the causes of the fire are. The City of Johannesburg, working together with us, will conduct an investigation and I would like to appeal to everybody to not speculate,” Mamabolo said.

In a statement issued on Wednesday by the Gauteng Health Department, they said a 2017 commissioned report revealed the building was not compliant.

â€œThe report which was presented in August 27, 2018, revealed that The Bank of Lisbon [which housed the provincial offices] was non-compliant with occupational health and safety standards. The building only had 21% compliance against the norm of 85%,â€ said the Gauteng Health department.

In August, Nehawu staged a total shutdown of the building, demanding that an alternative office be chosen. A meeting was called with the Health Minister Aaron Motsoaledi who acknowledged their staff members grievances and said the move would be considered.

In a interview with IOL after the meeting, Nehawu shop steward, Bhungani Mzolo said they were happy with Motsoaledi seemingly on their side. However, during a meeting last week Friday between the trade union, the provincial government and Gauteng department of health, they were told that they would no longer be moving. No reasons were given.

The Public Servants Association (PSA) have said in a statement that they also warned the union
â€œspecifically warned that the Gauteng health head office was a hazardous environmentâ€ and that in fact none of the government buildings in the province meet safety regulations.

â€œThe PSA puts the blame directly on the GPG as it ignored warnings and neglects the maintenance of departmental buildings to a stage of total dilapidation,â€ the PSAâ€™s Tahir Maepa said.

â€œThere is no working fire alarm in the building and many people on lower floors did not know about the fire until they were alerted by people fleeing the building,â€ Maepa added.

The PSA has instructed its attorneys to institute an urgent application to compel the department to provide a safe working environment.

The Democratic Alliance (DA) submitted a motion of urgent public importance to the Gauteng Legislature calling for the Gauteng Infrastructure and Health MEC to resign over their failure to heed warnings about the unsafe building.

In a statement released by Jack Bloom and Alan Fuchs, the shadow Health and Infrastructure Development MECs, they say the two MECs ignored warnings and complaints by staffs members. The DA is calling for the MECs to resign and if they do not do so, the Premier Makhura should fire them within five days.