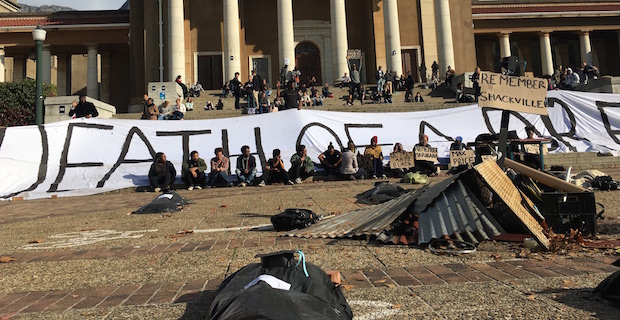 On Sunday night, protesting students represented by SRC candidates and the Shackville TRC and met with University of Cape Town (UCT) management to negotiate a way forward for the rest of the year and exam period in 2017.

They discussed various matters, including the Shackville TRC – what UCT management refers to as the Institutional Reconciliation and Transformation Commission (IRTC) – where students hope that expelled, interdicted and suspended students may be granted amnesty for charges they face for protest-related action.

At the end of negotiations, an agreement was signed by management and representatives of the student protesters.

Some of the main aspects of the agreement are:

Why the agreement was signed

The Daily Vox spoke to Khumbulani Jali and Simon Rakei, students involved in the Shackville TRC movement at UCT. These students said that the signing of the agreement was, in part, a necessary compromise on the part of the students, given the challenging situation the movement is in. They believe that a change in tactics and a different direction for the movement is necessary.

â€œThere was an emphasis that we needed to rethink our strategy, it was about looking long-term towards what it means for the movement to only prioritise shutting down – almost as an end in itself without real tactical gains. So because, as a tactic, shutting down wasnâ€™t going to get free education, it made sense to secure the gains and victories we have now through the agreement with management,â€ said Rakei, â€œI think the situation we find ourselves in is a bitter pill for many to swallow, but a necessary lesson about the importance of tactics.â€

â€œThereâ€™s still a ridiculous amount of work to be done, I mean the whole TRC hasnâ€™t even happened yet. So people need to be applying their minds to that and how weâ€™re going to be mobilising for next year outside of university spaces,â€ said Jali.

Rakei further added that there are great personal costs to continued shutdowns and protesting over a long period.

â€œPart of the reason for this agreement was also because people whoâ€™re deeply involved in protest have been putting themselves at risk. Especially with regard to mental health and safety – it’s very compromising,â€ said Rakei.

It’s been a long road for UCT students pushing to #BringBackOurCadres. This is from the #DeathOfADream installation months back pic.twitter.com/JX2IWHd8Hp

Not all students are happy with the agreement

Yet despite this, Rakei and Jali said that some students are happy with those whoâ€™ve signed the agreement – some calling them sellouts for compromising.

â€œPersonally I think it somewhat unfair to emotionally blackmail people into continuing protests, but for many theyâ€™re also expecting other students to be protest cows – to go about disrupting exam venues while they just continue on with their own lives,â€ said Rakei.

â€œFrom what I can tell, people are upset because clemency still calls for you to say that youâ€™re sorry for doing this thing and acknowledging that it was wrong. This speaks specifically to ideology and the question of political violence, that was always meant to be interrogated by the TRC – which hasnâ€™t actually happened yet,â€ said Jali.

Russell Ally, a member of UCTâ€™s Special Executive Task Team that has been negotiating with students, called the agreement a historic moment for the university.

â€œI can understand that, on issues of transformation and decolonisation, there will be political or ideological differences – but in terms of issues of access and affordability, it’s absurd that academics and students would be on opposite sides and fighting each other. For something that neither can deliver – its only government that can.â€

Ally said that although the UCT Executive still stood firmly behind the idea that wealthy students who could comfortably afford to pay fees, should pay fees, they understood that the demand for fee-free education could not be taken lightly.

â€œGiven the crisis that national education is facing because of the demand for fee-free education, it would be irresponsible of us to looking into how viable this may be. So we believe that a lot of research needs to be undertaken, and then use that research to create the basis for advocacy. And if we can actually make a case that, for the greater good, we should be speaking about fee-free higher education – then thatâ€™s something that university executives need to do, together with the student movement,â€ said Ally.

Although there are still a number of complexities involved, Ally said the agreement was greatly welcomed as the university could now resume the activities that it was actually intended for.

â€œOur job as management of universities is not be policing students, or having private security, when our role is to be that of providing leadership and education. These are our students, after all,â€ he said.

Ally too, feels that there are lessons to be learned from the engagements over the last few weeks.

â€œThe one enduring lesson I think is that, it doesnâ€™t matter where you are, you canâ€™t solve these issues with police, security and force. The students canâ€™t solve it with force, we canâ€™t solve it with having police and private security. There has to be another way of breaking past these kinds of impasses to focus on what we both agree needs to be addressed,â€ he said.