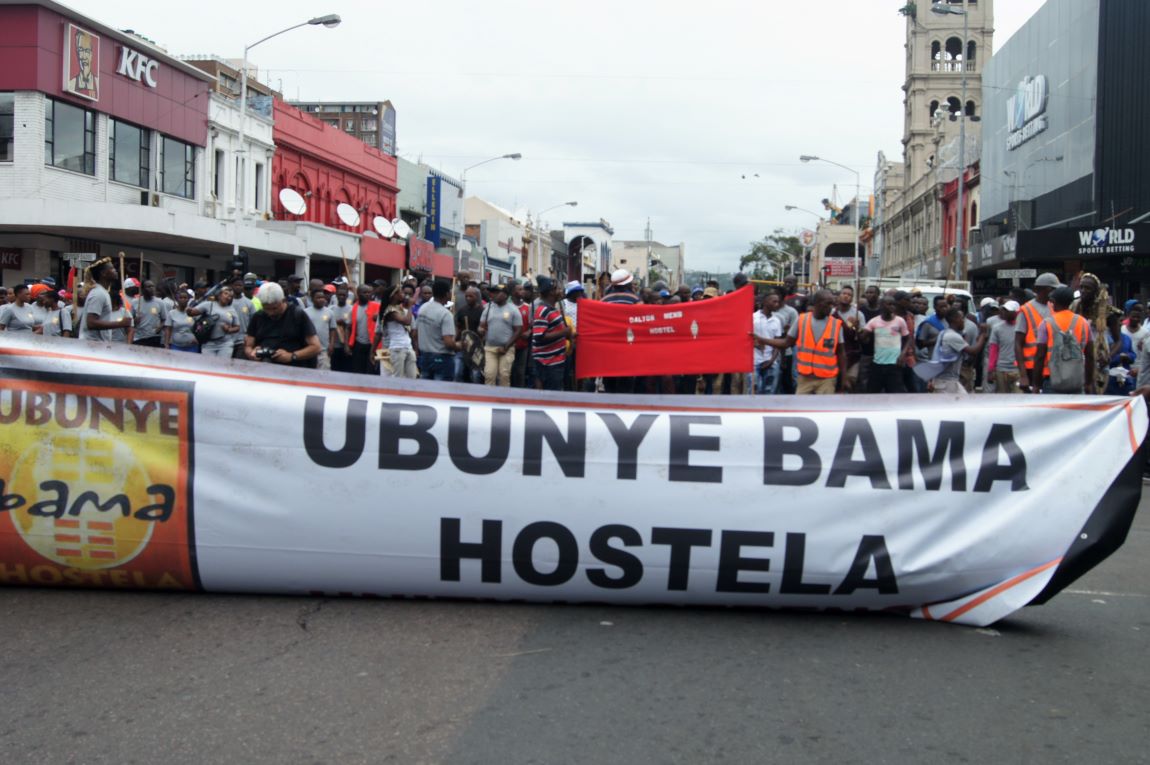 March 21 marks Human Rights Day annually, where South Africans commemorate the events of Sharpeville Massacre, however, for hostel dwellers around Durban this day is a constant reminder of their daily suffering and dire living conditions.

On Thursday, scores of people marched to the Durban City Hall to hand over a memorandum of demands to the city mayor Zandile Gumede. The march which was led by a group called Ubunye bamaHostela (Hostel Solidarity/Unity), in coalition with many other civil organisations including the Right2Know and Abahlali baseMjondolo, was an outcry against human rights violation of the ordinary people.

“All hostels were promised that there would be projects rolled out to build more houses in January but two months later, there’s still nothing. We have women and children living in houses without roofs, people staying in hostels deserve RDP houses,” he said.

Thusi also said that some buildings were old and debilitating as a result of the 2017 storm that ravaged KwaZulu-Natal, leaving many homeless and claiming lives.

“Some houses are still damaged from the storm. People have been waiting for projects to start kicking off but until now, there’s no progress,” he said.

Hostels in Durban have existed for years, with many becoming more welcoming to women and children. However, women staying in hostels say this is by no means victory for them due to an unconducive environment.

Thembi Ntombela, the chairperson of Ubunye Women, a wing from the Ubunye bamaHostela group representing women, said life in a hostel for women and children is a “nightmare”.

“Families are forced to share a house with other different families. In a four-roomed house you find that there are three families living there having to share the kitchen and the bathroom. It’s a very scary environment to raise children in but we have no choice,” she said.

Ntombela, who says she’s lived in KwaMakhutha Hostel for over 40 years now but the situation never gets better, is a mother of 6 and only rely on piece jobs to make ends meet.

“You wish to give your children a better life and raise them in a stable and healthy environment but without employment it’s highly impossible. We have to raise kids in spaces where there’s no privacy so we can’t even protect them from the social ills,” Ntombela says.

Nomvuselelo Ntombela (28) was born and raised in KwaMakhutha hostel, a place she has called home all her life. She says as much as most youth are born and bred here, one can never get used to their situation.

“We grew up in crammed four roomed houses sharing space with men we don’t know, now our kids are also forced to grow up in the same environment. Sharing a house with over 12 people, whom some aren’t even your family is really hard,” she said.

Hostels have been notoriously known for ongoing political violence, with the likes of Glebelands and KwaMashu hostels dubbed the most dangerous war zone and hitmen hubs. Ntombela says with the new generation growing up around innate atrocities, KwaMakhutha hostel has become a hub for crime and drugs.

“A lot of bad things are happening and we no longer feel safe, our kids are not safe,” Ntombela said.

In the memorandum handed over to the city, the group has called for the municipality to address grievances including overcrowding in hostels which results in spreading of communicable diseases, slow progress of building projects, politically affiliated job opportunities, and empty promises among other things.

A 69-year-old man from Ulundi has lived in Jacobs hostel, south Durban for over 40 years and says things never get better. Sobbing while talking to the Daily Vox, Smanga Biyela said the government had forgotten about them.

“We were promised change 25 years ago but we are still being treated inhumane. We vote but our lives never get better, all we ever get is empty promises. After so many years of voting, why are they still treating us like this, aren’t we human?” Biyela asked.

The city has been given an ultimatum to respond to the memorandum in 7 days.