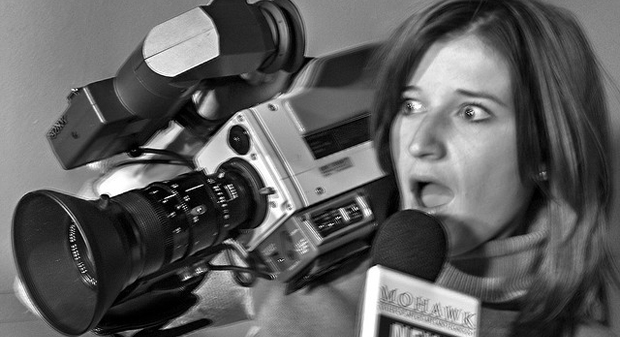 You would think that bright lights and a news crew filming live would be enough to ward off any robbers with bad intentions. But no. After SABC contributing editor Vuyo Mvoko and his colleagues were mugged last night, you might be wondering how this could have been avoided. RAâ€™EESA PATHER has a few tips for journalists seeking safety on the streets of South AFrica.Â

1. Kick it old school: use nothing but a pen and notepad

Cellphones are not worth your lives, dear comrades. Journalists usually have the best stationary swag but would the robbers stalk us for ourÂ pens and paper? Not unless they’re the type to also hold up a Typo store. We donâ€™t really need to read a stream of live tweeting; and these days it seems recording sound and pretty pictures is just too risky. Our messy handwriting and ink-stainedÂ hands will have to do. (Cries).

2. Do all your live reports outside an SAPS station

Just to be on the safe side, journalists should consider doing all their reporting from in front of aÂ policeÂ station. Hopefully this, if not the rolling cameras and live feeds, will serve as some sort of deterrent. We advise journalists not to report on SAPS, howeverÂ as we cannot be held liable if they throw teargas at you or demand that youÂ delete any incriminating pictures or video.

3. Make sure the cameras are always rolling

You robbed our colleagues live on TV. We will use the same media to expose you. Pic via @Chriseldalewis pic.twitter.com/LnMLBAih4a #StopCrime

Now that the faces of Mvokoâ€™s muggers have been posted all over the world and been watched more than 300,000 times in less than 24 hours, you can be sure that many a robber will fear your camera.Â So weÂ suggest journalists beÂ required to take cameramen on all assignments â€“ regardless of whether the footage is for broadcast. Dashcams must be set up on all cars; and, where possible, journalists should be equipped with pinhole pocket spycams. Who says the State Security Agency should have all the fun?

Yesterday, a member of the Twitterati raised a point of order with the SABCâ€™s Chriselda Lewis, who was part of the group that was mugged.Â â€œWhere was the security guys?â€ asked @Xikhiya.

â€œWe do not have security when we do our jobs. It comes with the territory, sir,â€ replied Lewis.

Some South Africans are valued so highly that they get armed guards and blue light brigades to protect them wherever they go. Journalists, as last night’s incident showed, are not among this group. Political reporters however might be able to get away with someÂ incidental security services if theyÂ stick close enough to cabinet ministers. HoweverÂ the downside of getting too close toÂ an MP is that you might not be able to write what you like.

Mvoko was cool, calm and collected even while the muggers were circling his team. Although his cool may not have been enough to stop the mugging, it certainly helped raise the alarm bells on just how prevalent crime in South Africa is â€“ not to mention ensuring his own personal safety. Whatâ€™s a wallet, compared to your life?

So, if you forget to follow our advice and find yourself on the wrong end of a weapon while live on air, keep calm and keep reporting the news. Remember to describe the situation, even if it involves saying things like: â€œWe are being mugged,” or “Now they are taking our car keys and cellphones.â€ MaintainingÂ records is an important ofÂ anyÂ investigation.

But seriously, we’re shocked at the incident and are glad that Mvoko and his colleagues were unharmed. Reporting the news can be dangerous and even life threatening. According to the Committee to Protect Journalists (CPJ), 17 reporters have already lost their lives in the line of duty this year. The CPJ’s journalist security guide hasÂ everything you need to know to stay safe while you’re out there. (Although it does not appear to actually say anything about street crime.)