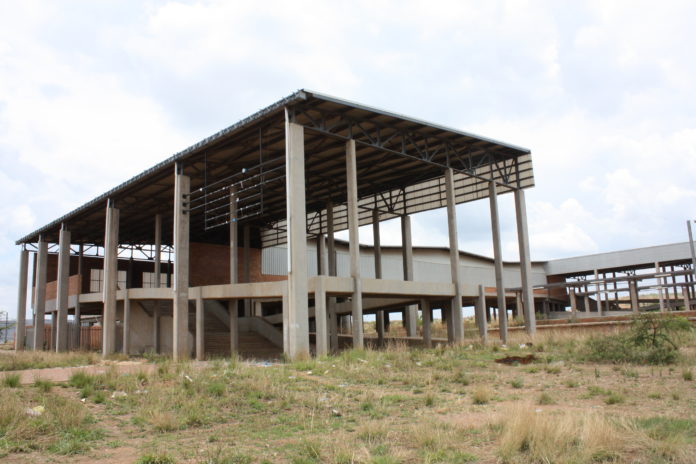 For several years now, hundreds of Mamelodi residents east of the city capital Pretoria have been struggling. The residents are spending more money on public transport. They cannot use the train to their various places of work. This is because the Greenview Railway Station is being vandalised.

When The Daily Vox visited the station recently, it was found there was a building without a roof, windows and door frames. The electricity cables and the rail tracks had been stolen. There are drug addicts who have made the place home and are sleeping there at night.They have turned the place into a hiding place for criminals..

According to local community leader Pretty Mokgabudi, the project of the station created job opportunities for local residents in the area but was stopped in 2018.

“Millions of rands were spent on it. It would have helped the people in the area and surrounding areas. Trains are the only cheaper and reliable transport option other than taxis,” Mokgabudi said.

“I just want the station to open and operate. I spend too much money on taxis everyday to work. What is amazing is that  there is a train station in the area. The train station is not working. If they can open it, many people will save their money,” said angry Kgalalelo Modibedi, resident of Mamelodi Phomolong section.

Modibedi said: “I remember very well just before the lockdown I used to travel using the train. Now I walk a long distance to ride a train in another station far from my place. The train does not stop at Greenview station, which is walking distance from my home.”

Limpopo villagers waiting for more than 20 years for gravel road

Another train commuter Davud Matsena said: “I travel to attend my studies at university of Pretoria in town. When I travel by taxi I pay more money. Whoever is responsible, please open the station so it can function and operate.”

Residents  were hoping to use the train but it is taking many years for them to keep on waiting. While Greenview is the only station not even operational, there are many railway stations in Pretoria facing severe degradation.

The project is part of Passenger Rail Agency of South Africa (PRASA)’s overall strategic objective of positioning passenger rail as the backbone for public transport. This is because trains are able to move a large volume of passengers.

When pressed for comment, project manager strategic infrastructure Buhlebenkosi Maphosa denied claims that the project is failing the commuters.

“The project has not failed. Land matters which affect the completion of the station are being attended to and have reached an advanced stage. The construction of Greenview Station started in 2011 and so far the construction costs are R102 556 900.33,” Maphosa said.

Maphosa said: “The project stopped in October 2018, after the then appointed contractor cited community unrest. The train is not stopping at the Greenview station because the station is not complete and the Building Occupation Certificate has not been issued by the City of Tshwane.”

Maphosa promised that the timelines for the completion of the project will be communicated. This is once the land matters have been addressed and the turnkey contractor has been appointed. The project encountered numerous delays due to contractors citing community unrest.

Maphosa said: “The project is moving ahead, at the moment land matters are being attended to.”