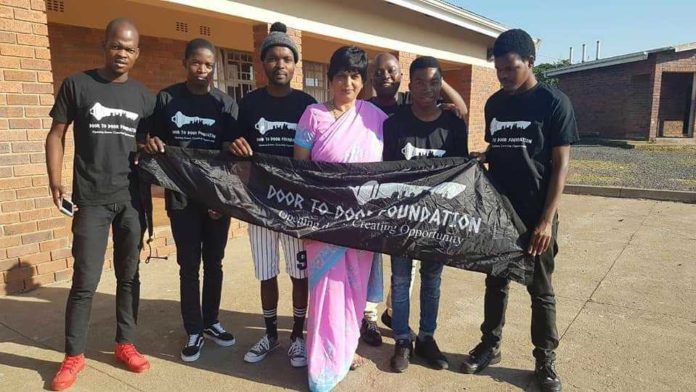 The Durban-based, youth-led, non governmental organisation, Door to Door Foundation will be spending its 67 minutes renovating a local school in Magabheni Township; in part with community upliftment and in honour of the late Nelson Mandela.

July 18 marks Mandela Day annually, in commemoration of the late icon and former South African President Nelson Mandela. An organisation led by young people in the south of Durban has partnered with various stakeholders for Mandela Day programme, in honour of the late struggle stalwart.

Speaking to the Daily Vox, founder of the Door to Door Foundation Sihle Phungula (30) said the organisation has always carried out different programs for this day since 2017.

“Door to Door was established back in 2016 and has always played a role in commemoration of Mandela Day, where a youth led group would come up with ideas on how to give back to our community,” he said.

Phungula, a town planner by profession says he founded Door to Door after having taken a closer look at issues affecting young people in his community, Magabheni Township; which is on the outskirts of town.

“Door to Door was founded because we are on the far side of the town and that means our youth doesn’t get to access many opportunities, including access to information and skills; and it’s what’s holding them back. The idea was more about providing skills and access to information, but due to structural and systemic issues that surround doing that, there are many challenges in the community,” he said.

Phungula says for this Mandela Day, they will be renovating a local school that’s in a bad state as part of their 67 minutes.

“This year again we are looking at a school in our community which is in a very bad state with broken windows. As for painting, I think I was still a child when it was last painted. So we will be painting the exterior and cleaning the toilets, getting rid of the graffiti; and disinfecting them.

“We are also working with correctional services who assists us with parolees, they have been helping us over the last few years as we work on encouraging people integration into communities. So, they will be bringing people with lawn mowers to cut the overgrown grass and plant 67 plants that we will have to teach the school kids to take care of for sustainability,” Phungula said.

As an organisation that works more around advocacy, Phungula believes that it’s important for young people to be active citizens, that’s why the foundation also provides civic education programmes.

“We want people to be independent thinkers and active citizens, so we also work with homeless people in town to educate them about their rights and responsibilities. We are passionate about empowering communities with information, and then they will be able to be organised and do things on their own without waiting for government,” he said.

Meanwhile some youth have expressed heavy criticism for Nelson Mandela as a leader, saying he did not do enough for young people of the country and they see no need for his commemoration through Mandela Day; Phungula said Door to Door Foundation’s civic education programmes were in part with educating the youth of his community about the history of South Africa and politics in general, so that they would be able to think independently and hold their leaders into accountability.

“The youth I work with is very politically conscious because we have walked quite a mile together. They understand that being a leader doesn’t necessarily mean one is perfect through open minded programmes that I’ve exposed them ro, including political dialogues that we have.