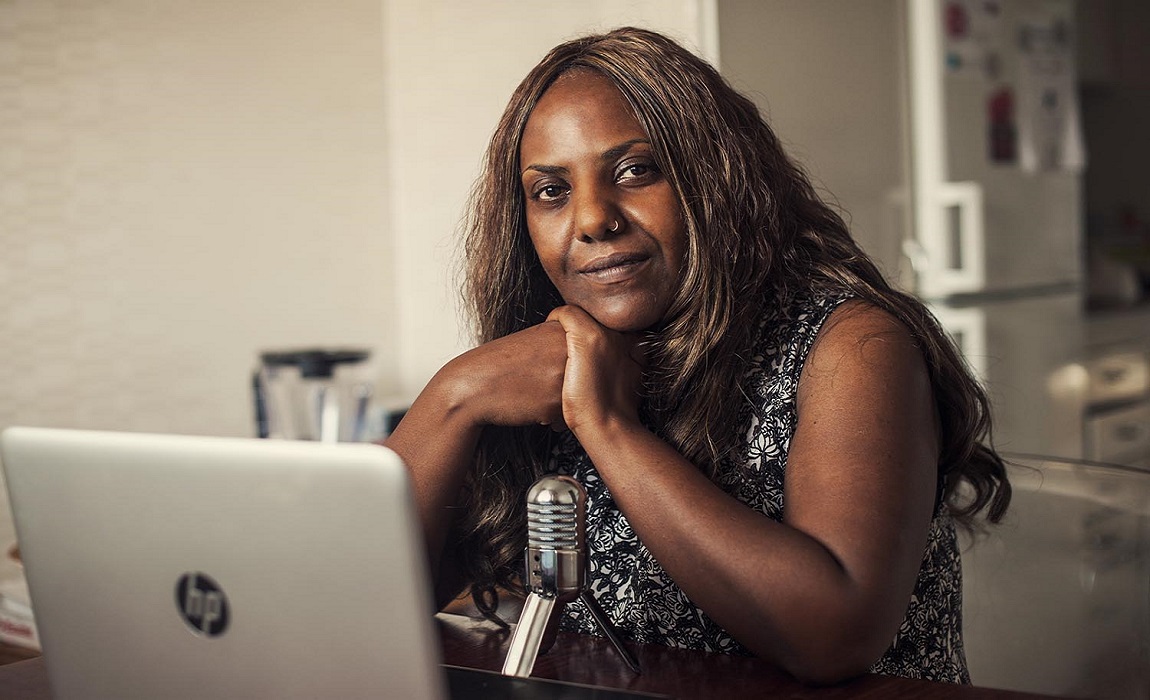 Meron Estefanos works tirelessly to aid and raise awareness about the plight of Eritrean refugees. The Swedish-based Eritrean human rights activist and journalist hosts a weekly radio show from Sweden – “Voices of Eritrean Refugees” – which highlights the cases of the thousands of Eritrean refugees who have been kidnapped, tortured, and held for ransom in the Sudan and the Sinai. Kidnapped Eritreans or their family members speak on the show and she gets their stories out in an effort to free them. Estefanos has written articles and books and has co-founded an advocacy organisation, International Commission on Eritrean Refugees, in her efforts to rise up against the Eritrean government and help her people. The Daily Vox spoke to her about her work and why she does it.

“What woke me up”

I grew up in Sweden so I didn’t have any idea what was happening in the country. I grew up idolising this regime because they were the freedom fighters. I moved back in 2002 and lived there for two years. As a Swedish citizen I was privileged enough not to have to do military service and other things but I saw how people lived in fear. I saw my neighbour getting arrested late at night. I kept asking why is he arrested, when will he be brought to court? But no one would answer my question. Instead they would tell me not to ask such questions. That woke me up. He was our neighbour, when we were kids he was our teacher, he was one of most disciplined and well-respected men in our area so I could not believe no one was asking about him. It’s such that families are afraid to ask about their loved ones who are imprisoned. This is what woke me up. When I came back to Sweden I started telling stories about what I saw in Eritrea.

Eritrea is a 27-year-old country that never had elections and doesn’t have a constitution. There isn’t any kind of freedom: there’s no freedom of assembly, there’s no freedom of movement. If you have to move around you have to have a permission paper. We haven’t had a free press since 2001 – anyone who dares to criticise the government disappears. Prisons are so full that we have to use containers as prisons. Most of the political prisoners are kept in containers which can be really hot during the day and very cold during the night. Anything you say can land you in prison. If you say you are hungry – that can be interpreted to say there is starvation in the country. People are ruled by fear.

“Even in diaspora we are not free”

It’s just as bad outside as inside Eritrea

My phone rings 24 hours. People call me with all kinds of crazy stories; the saddest stories. I’ve listened to people as they were being tortured, women as they were being gangraped which affects me. Knowing such kinds of atrocities are happening makes it crazy that no ones talking about it. I see people suffering and it’s just my duty as a human being to care. I’ve been reporting on what’s happening in Libya for the past nine years. It’s nothing new – it has become our new normal. Seeing the refugees that I speak to and their will to live, I get amazed how a woman knows she is going to be raped at least three times until she reaches Europe and yet she takes a risk so she will take prevention injections. I admire these people’s will to live and change their lives. It’s tiring and depressing but I say to myself: my problem is just listening to their problems, they are living these problems. I remember what they are going through and this makes me carry on doing what I do.

It was my activism that led me to journalism. The things that I was burning for were not being covered, especially when it’s anything that has to do with Africans. The mainstream media is not interested.

There is no awareness of what happens en route. People only see the stories of those who have made it to good places like Sweden. They do not think of those who could not make it: who were beheaded by ISIS, killed in Sinai, the Mediterranean Sea, and the Sahara. I started the show to raise awareness and convince people to stay at home and change the things that are making them leave instead of dying in the Sahara. That’s the point: to make people stay where they are. Refugees appreciate it because they can know what is expected. It’s people who are in prison, kidnapped in Libya, to discourage others in taking that same route.

The way I look at things is one country is judged by how it treats its own people. Once you have equal rights for everybody, that’s when you start treating your fellow neighbours – refugees or anyone – with compassion. In Africa we Africans are very ignorant of what happens right next door. Sometimes you read about something that is happening to an African and it’s only people who come from that country that will care about that issue rather than looking at it as all humans are the same. Compassion shouldn’t be just for your fellow countrymen, it should be for everyone. For some reason we fail there. But also, how many of us know about human rights?

The price of activism

Government will do character assassination – they will write things like I’m a prostitute or drug addict. When they see that that doesn’t scare you they start attacking your family. They start writing about how my mom is a prostitute, that she’d been a spy for outside agents even though she lives in Eritrea. They do this so you don’t have supporters because being a humanitarian, a lot of people sympathise with me even if they are government supporters. They start creating rumours that I’m a trafficker and a smuggler, I’m behind the kidnappings in the Sinai, I get to understand who dies and lives. Their supporters actually believe it which puts my life in danger wherever I am. It’s always harassment on social media – sometime I have to block up to 100 people a day because they keep changing their names just to attack me.

Rise up against oppression