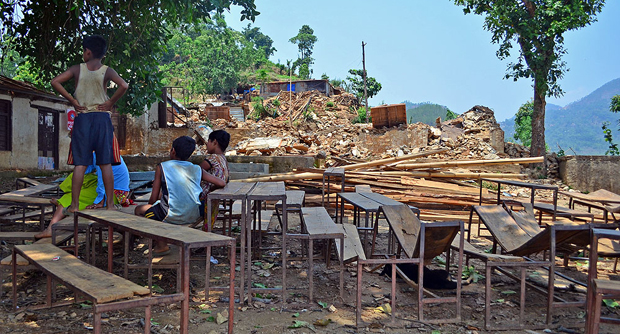 On Saturday it will be 50 days since the first earthquake hit Nepal. Less than two months have passed since the devastating quake, but already relief efforts are slowing down due to donor fatigue andÂ tough regulations by the government. Photojournalist QAZI ZAID paid a visit to the district of Nuvakot to find out how people are coping.Â

Figures by international agencies place the death toll from the quake at about 9,000 and close to 18,000 people haveÂ been reported injured. To put this into context: one-fifth Nepalâ€™sÂ population has been directly affected by the earthquake.

About 150km from Kathmandu and closer to the epicentre of the quake, many pockets in the NuvakotÂ district have 100% damage. People complain that they have not seen anyone from the government, apart fromÂ engineers who hung signs that mark buildings as â€œunsafeâ€.

While the worst hit areas ofÂ Sindhupalchowk and Gurkha have been the prime concern of the government and non-governmental reliefÂ organisation, the district of Nuvakot has been largely ignored. A young woman runs past her destroyed house in the Gangdada village in the Haldekalika village development commnity in theÂ Nuvakot district of Nepal. The destruction in this area of Nuvakot, which is 150km from the capital city of Kathmandu and closer toÂ the epicentre of the quake, is close to 100%. Villagers in Gangdada village Nuvakot, Nepal take refuge under a tree. One month on sinceÂ the first earthquake shook Nepal, many still donâ€™t have a place to stay. Like people in many parts of Nepal, people are still sleeping under the open sky. Anma Mai, 80, from the Buddhist Tamang community takes shelter in a neighbourâ€™s house thatÂ was fixed by the locals. Mai lost three members of her family in the earthquake, and is the only surviving family member. A group of young men from the Tamang community play a local game called â€œpottâ€, a board game that resembles ludo, while takingÂ shelter in the only house still standing in their community. Ramesh Giri stands in front of a school that was destroyed in the earthquake. Giri lost his daughter, whoÂ studied at the same school. Children outside a school in Haldekalika in Nepal marked â€œunsafeâ€ by the government.Â Three children from the school died in the earthquake that took 9,000 lives. Children role play â€œteachers and studentsâ€ in a destroyed school in Gangdada village. Many people have also taken shelter inside partially destroyed schools, which places their lives in danger. Ram Bahadur, 40, stands in front of his house in the remote area of Nuvakot, which wasÂ partially destroyed in the earthquake. Bahadurâ€™s house lies in the middle on a crevasse that developed in the earth due to theÂ earthquake and runs past his field and though his house. â€œEven a small aftershock or rain canÂ cause a landslide here. It is unsafe for us to live here,â€ Bahadur says. Villagers collect relief outside Shri Ganesh School in the Haldekalika village development community in Nuvakot, Nepal.Â Many schools have been turned into makeshift relief camps by local volunteers and reliefÂ organisations. Traffic is halted while government officials clean the road thatÂ connects Nuvakot toÂ Kathmandu. Landslides have been common because of continuous aftershocks and rains inÂ Nuvakot, which lies in the surrounding hills of Kathmandu valley.

Qazi Zaid is a freelance journalist and filmmaker from Kashmir. His recent workÂ includes an award-winning documentary film on the September 2014 floods inÂ Kashmir. He tweets at @angrykangri.