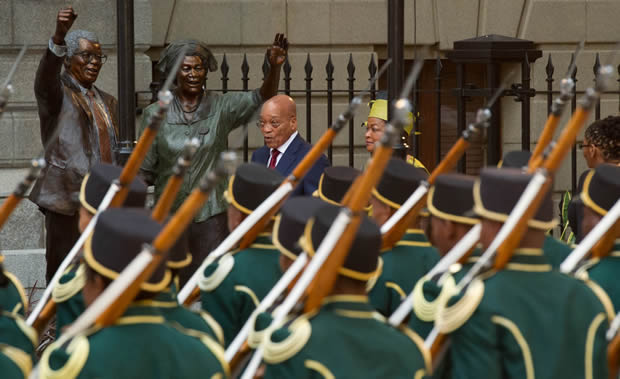 Sona 2015 was not a pretty sight. The opposition benches stood glaringly empty. South Africans sat back in shock. And the president, well, he seemed to be entirely indifferent. By KHADIJA PATEL.

President Jacob Zuma chuckled slightly â€“ that lilting laugh that has endeared him to so many â€“ and then just continued to read from the script. As if nothing had happened. As if cellphone signals had not been not disrupted, purportedly by State Security. As if Parliament had not just been rendered a farce. As if democracy in South Africa had not been rendered a sham.

The EFF was predictable. They did exactly what they said they would â€“ they demanded to know when the president would #paybackthemoney. And the speaker, Baleka Mbete, was ready. She read from her own prepared script â€“ one that appears to have been shorn of any democratic sensibility. Her own script did not even defer to the rules of Parliament she is meant to be upholding.

And while â€œsecurity agentsâ€ used violence to remove democratically elected representatives of the South African people, the president appeared entirely unruffled. When the DA walked out in protest over the use of the South African police to bring the opposition to heel in Parliament, Zuma was still unmoved.

He stuck stubbornly to the script. It was a script that may have been relevant on another night â€“ another year perhaps. But on this night, as the opposition benches stood empty, and South Africans watched in thrall, Zuma just looked on… and then said nothing.

Zuma failed to recognise the utter absurdity of his own script.

Many South Africans may not agree with the EFFâ€™s tactics in Parliament on Thursday. But itâ€™s often said that the paradox of a democracy is that inherently must protect the rights of its minorities. And the National Assembly appears wont to fudge the niceties of this constitutional democracy to protect one man from censure. Much like various government departments appear to think nothing of using several million rands of state funds to build swimming pools for that man.

Zuma did eventually deliver his speech undisturbed by any nagging points of order from across the aisle. There was throwaway sentiment about this and that, and nothing much at all.

The ritual of the State of the Nation Address was completed with Zuma repeating the title of the ANCâ€™s 2014 election manifesto: â€œTogether, we move South Africa forward.â€

The election already feels like a long time ago.

And if the ANC had promised something radical, it appears to be radical change in the wrong direction.

Itâ€™s about time Zuma acknowledges, at least, that this is not business as usual. It is utterly bizarre to be speaking about national achievements in (non-Nkandla) swimming pools and beauty pageants some place else, when the very fabric of our democracy right here had home has had holes stamped into it.

The presidentâ€™s office owes it to the people of South Africa to admit his complicity in the chaos that reigned on Thursday night. Zuma, at the very least, ought to show some leadership, and not the kind of Machiavellian puppetry we witnessed.