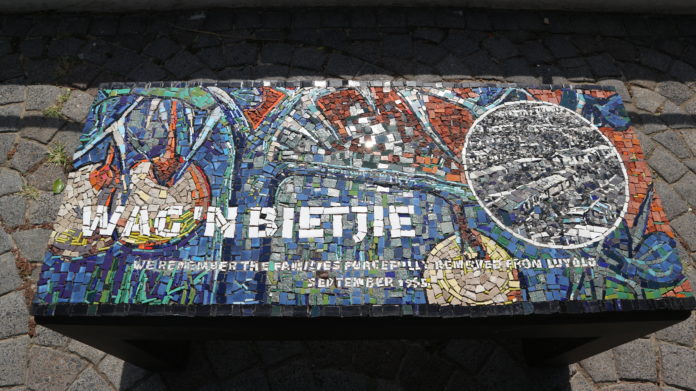 Ling Shepherd visited Simonstown to see a new set of benches commissioned to commemorate the forced removal of Black and Coloured people from the area in 1967.

I visited Simonstown to see the mosaic benches commissioned by the government to commemorate the forced removals of Black and Coloured people from the area. Simonstown is beautiful. And if you have the time, it makes for a great day trip – You can lunch on the water, go on a boat ride and potter around the town.

The drive up was scenic until we got to Jubilee Square, the town square.

The Wag ‘n Bietjie benches are a project of the Simonstown Museum.It is a province-aided museum which receives support from the Government of the Western Cape. Greatmore Studios partnered with the museum to bring the project to life.

Simonstown was declared a white area in 1967, although forced removals started two years earlier. Black and brown Simonstown residents were forcefully relocated to the Cape Flats. The Simonstown museum called it a special occasion, it is not. It is a reminder of a traumatic crime that has never been addressed with real compassion and empathy.

We need to start being more cognisant of ongoing oppression when we try to memorialise trauma. Five thousand people were forced out of Simonstown. While the soft cool air was wafting through the village, people were forced out and into the sandpits of the Cape Flats. This cannot be romanticised or remembered without taking into account the impact this had on these people’s lives. The opportunities, jobs and human connections all lost. The extraction from the only thing you ever knew to be placed on the flats; sandy enclaves deemed good enough for living by the Apartheid government.

The idea behind the “wag ‘n bietjie” benches is to ask people to pause when visiting Simonstown, and reflect on the forced evictions. There is nothing peaceful about this idea. It just reflects how insidious the forced evictions were. How it was actually a repeat of the removal of indigenous Khoi people in the area by colonists many years before. Simonstown is “bo blink en onder stink”, the rot is beneath the pretty surface of yachts in the distance and instagrammable photos. The entirety of spatial planning of that era is a memorial to Apartheid. So putting six bences in a town square dedicated to the British crown makes no sense.

It is also particularly ghoulish to place benches next to colonial structures like cannons. It is like a memorial inception and mixing oil and water. The crown never represented freedom. This was not thoroughly interrogated. Commissioning artists who are black and brown do not give this legitimacy either. I am not a bitter bessie who does not come with solutions.

So here are my suggestions when you want to do a memorial. Get any western ideas out of your head and in your planning meetings. Create employment by hiring people to find the people and their descendants who have been forcefully evicted. Interview the people and understand their pathos. Ask them what they would want. Most importantly, offer reparations. There is no amount of money in the world that will change what was done to people. Time was lost, and that you cannot buy back outright.

Less than a boat ride away is the Ocean View Forced removal settlement. An area created to house the forcefully removed residents of Simonstown. We know that forced removals did not always mean putting people in outposts far away. The white communities needed labour. So black and brown South Africans were nearby but not too close. So just like the benches you are given a bietjie of; a taste – forcefully removed folks got a painful reminder each time they travelled to work. The idea of a bench is just as horrific. One of the mainstays of Apartheid was desginating what benches you could sit on according to your race. I am here to ask why the hell would you even choose a bench, knowing what it represented in 1967? The same thing used to make them feel less of a human you are using against them. It is not a re-imagination at all. Where is the PTSD counselling ? Have we ever really explored the mental effects of being forcefully removed? Reparations are not just monetary but  also to provide resources to help with trauma.

There is a laziness epidemic in South Africa when it comes to addressing the past. Commemorating trauma will never be easy. But it needs to involve the people who were hurt and displaced. Money is no complete solution but it represents accountability and empathy. The forced evictions have had immeasurable effects still felt today. Reparations and direct apologies is how you give back dignity to people, or at least parts of it. It is often said you can only regain dignity in the place you lost it. So then give back all the land now or an equivalent. We know this is possible. Talk about the mental effects, and provide help for the displaced who are still alive. Compensate instead of giving diluted tributes to displaced people.