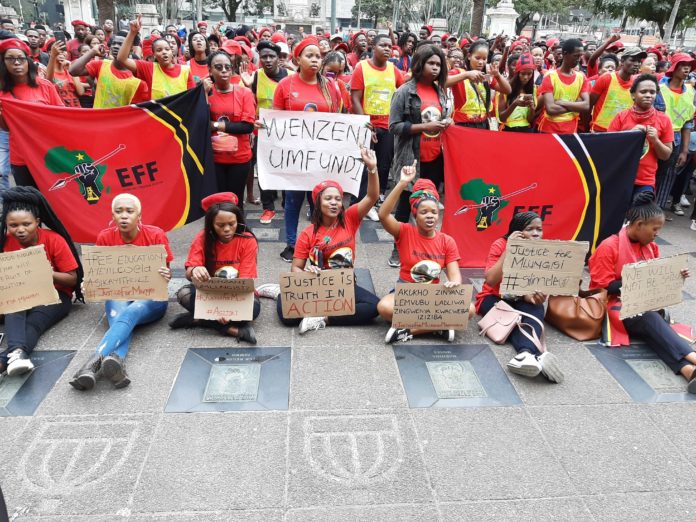 The National Prosecuting Authority says it will review its decision not to prosecute the killing of Mlungisi Madonsela, who was shot by security at the Durban University of Technology in February. This follows his family’s plea to the police minister to revisit the decision.

On Monday students from DUT and other universities joined hands and marched through Durban streets calling for the NPA to review its decision on the slain student Mlungisi Madonsela murder case.

Speaking on behalf of his family, Madonsela’s sister Sibekezelo Mgenge said the NPA’s decision and the whole was taking a toll on the family.

“We were told that Mlungisi’s case has been thrown out of court because it was a mistake. We have been let down by this country’s justice system as the family because a person cannot just be killed and be told that no one will be prosecuted,” she said.

Mgenge pleaded with police minister to leave politics out of Madonsela’s case.

“We are pleading with them to remove politics from this case and deal with the murder because Mlungisi was killed. His affiliation to a political party should not mean his case  doesn’t deserve attention.

“Take politics out of the equation and deal with murder case, he was a brother and he was a son before he was was a fighter. So, we are pleading with the minister of police to revisit Mlungisi’s case. We heard that he will be revisiting Senzo Meyiwa’s case and we are asking for them to revisit this one too because it deserves the same attention,” Mgenge said.

Madonsela who was shot and later died at City Hospital on February 5 this year after sustaining gunshot wounds following a scuffle between private security guards and students at a protest.

Gustav Mboweni, a member of the justice for Mlungisi campaign committee said the march is in line with the date that Mlungisi Madonsela was killed, the 5th.

“We are here to march for justice for Mlungisi Madonsela who was brutally killed while fighting for other students. We are not seeking revenge but we demand justice,” she said.

The NPA had thrown out the case in June after it found that there was not enough evidence to prosecute the accused.

However, following a memorandum by the students at DUT, the NPA says it will review its decision.

NPA spokesperson Natasha Kara said the NPA will be reviewing its decision.

“We have received the memorandum and it will be communicated to our director.  The decision in this matter will be reviewed by one of our senior officials and once the decision is made we will communicate,” she said.