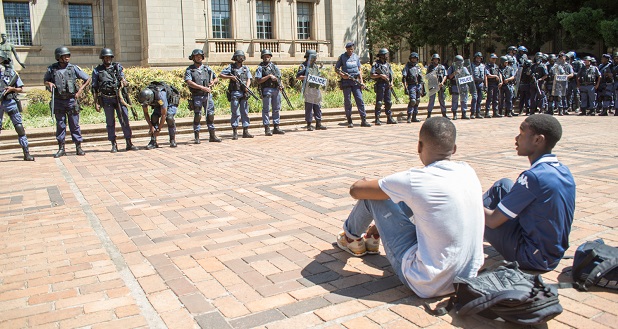 Around lunchtime on Wednesday, 12 October, students were sitting peacefully on the Wits Library Lawns. It looked like a normal day at varsity. As I walked across the the field towards the Great Hall, I saw two nyalas parked on either side of the Great Hall stairs and I remembered the violence from Monday and Tuesday. Voices discussing strategies and humming struggle songs reached my ears as I eavesdropped on conversations.

I struggled to find students who actually attended class on East Campus even though they intended to. BA student, Nadia de Abreu was annoyed that class was cancelled and she had come in for nothing.

â€œI didn’t receive any notification about classes being cancelled. I feel like there is miscommunication between the SRC and the university because I have driven here and it’s such a big waste of my time. I feel like they should shut down the university until something gets sorted out. Nothing is getting fixed,â€ she said.

Mary Moagi, also studying a BA, explained why she doesnâ€™t feel safe on campus but came to class on the insistence of management.

â€œI have been here since Monday [10 October] and it’s not safe to be on campus. I am even more terrified because I am black, the police wonâ€™t even consider if I am part of the protest or not. I feel like I am a criminal when I walk around campus and I really don’t want to be here at this moment. Management keeps insisting that we must come back to class. I want my degree, this is why I am here, and the only way to get it is to support management’s decision. I also want the fees to fall because I canâ€™t afford to pay. I really don’t know what to do now in the midst of the mess,â€ said Moagi.

While BSc student, Gerald Thwala, told me how itâ€™s not fair that his colleagues arenâ€™t in class with him.

â€œI had a class at Umthombo this morning and we could here some people chanting
and running around. The environment is not conducive to learning. I think we should all be on the same side, if the protest continues, we should be considerate and think of others. We shouldn’t learn without them,â€ said Thwala.

I found students who attended classes on the other side of the Great Hall. The entrance was guarded by more than 10 members of private security and Campus Control officials. Every young person was required to present their student card before gaining access into the building.

Leon Hwacha, studying a BA, said that what he learned in his lecture echoed what was happening outside the room.

â€œI walked past the Great Hall and saw cops and students going to class on the one side and black students having a meeting on the other side. I felt like such a traitor on my way to class, like I was being anti-revolutionary and was betraying the cause. We had a history class on the making of modern South Africa and partial integration. We were in a class talking about institutional and systemic oppression, while the exact same thing was happening outside to the forebears of the very same people we were discussing. I looked around at all the students and I was wondering how they could absorb all of this information while history was playing itself on outside,â€ said Hwacha.

Fine Art lecturer, Rangoato Hlasane described how the lack of communication between management and students is making the current situation worse.

â€œThe decision to continue with academic programme exposes itself as something that is dishonest and not open to communication because students are not coming to class. Some are protesting, some are afraid and others as stuck in between. Classes are empty and not attended to. Parents insist that students stay away from class, this just exposes the fact that the university management’s processes have not been inclusive. There is no communication, particularly with the students or the broader stakeholders. It actually justifies the argument of the students protesting for free quality decolonised education,” Hlasane.

After speaking to the academic contingent of the Wits community, I walked over to a group of private security officials hired by management. They have been on campus for such a long time this year, it’s only fair to consider them staff members as well. When I asked how they felt about the situation, they stared at each other waiting to see who was going to respond to the young reporter with a recorder in her hand. The one sitting closest to me responded.

â€œThere is a protocol which forbids us from saying anything to anyone about this matter. We are just here for now, and there are many things to be said but I cannot do it while Iâ€™m wearing this uniform,â€ he said.

But a member of Campus Control spoke to me in their personal capacity, on condition of anonymity, of course.

â€œIt feels horrible watching students getting injured by the police. Especially now that exam time is around the corner. I feel some type of way. I think they are fighting for a good cause but they haven’t made enough time to study. I think continuing the academic program is going to be hard for them,â€ he said.

While the university claims that classes are filling up each day, protests continue as students fight against an imposed curfew that forbids them from being on campus after 10pm.

Itâ€™s clear that the academic programme has continued for some and not for others. Wits University has designated areas on East campus for protest, while students on West campus and at the Medical, Education and Business schools seem to be peacefully continuing with their academic programme.