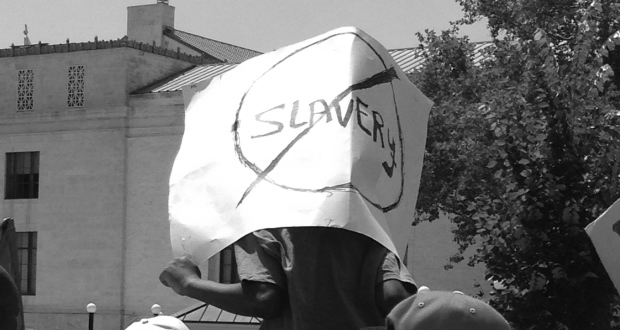 AÂ petition atÂ online campaign site Avaaz, calling for the release of Mauritanian anti-slavery activist BIRAM DAH ABEID, has garnered almost a million signatures in theÂ week since it was launched. Now Abeid, whoÂ was imprisoned in November, has written an open letter on slavery in his country,Â from his prison cell. In theÂ letter, the activist calls for support from the international community to eradicate slavery and exploitation in his country.

Slavery was abolished in 1981, but legislation outlawing it in Mauritania was only enacted in 2007. Abeid writes that Mauritania has the worst slavery problem on earth and that 50% of the Mauritanian population is made up of slaves and former slaves. The Global Slavery IndexÂ estimates that over 155,000 of Mauritaniaâ€™s citizens remainÂ enslaved.

Abeid began an anti-slavery movement known as IRA-Mauritania in 2008, but hisÂ government does not recognise the organisation – instead, he and other activists have been imprisoned, harassed and tortured.

The AvaazÂ petition calls for his and othersâ€™ unconditional release, the abolition of slavery in all forms, for legal recognition to be given to anti-slavery organisations and for the repression of abolitionists to stop. The petition was launched last ThursdayÂ andÂ had collected over 987, 000 signatures at last count.

Avaazâ€™s Bert Wander explains that the campaign is not waiting to reach the 1-million signature mark before they take action. They have been calling Mauritanian embassies worldwideÂ to demand Dah Abeidâ€™s release. The petition will be delivered to the European Parliament in Brussels. Wander says the organisationÂ intends to put pressure on the European Union to review and suspend European Development Fund payments to Mauritania.

You canÂ view the original petitionÂ on the Avaaz website.

Read the full text of the letter below.

My name is Biram Dah Abeid. I have devoted my life to the struggle against slavery, impunity and injustice. It’s a promise I made to my father, who married a slave and whose family was ripped apart because of slavery. Today, I am writing to you from the prison cell I am kept in for speaking out to end this cruel trade.

My country, Mauritania, has the worst slavery problem on earth â€“ the Haratin, (a reference to slaves and former slaves), represent 50% of the Mauritanian population. Babies are born to masters and forced to serve them their whole lives.

In October 2008, I took the decision to create IRA-Mauritania (Resurgence of the Abolitionist Movement Initiative), an independent, peaceful and non-violent organisation whose primary goal is to deliver our country from the scourge of slavery.

Despite support from the international community, and many sit-ins and protests on behalf of slaves and former slaves, our organization IRA-Mauritania is not recognized by the Government of Mauritania. Instead, our members have been harassed, tortured, tried, convicted and imprisoned, accused of belonging to an illegal organization. I have been behind bars since November, with my assistant Brahim Bilal. This is my third spell in jail for speaking out against slavery.

The government has passed laws that speak of punishing those involved in slavery, but in practice it has focused on stamping out our fight to end exploitation of slaves. My government wants to silence me, by demonizing me, harassing me, and imprisoning me, and hopes I will abandon this cause by being silent or leaving the country.

Yet I refuse to give in to their blackmail.

To end this suffering, we need more than words from the international community, we urgently need strong action. The leaders of the European Union, and the United States have strong ties with the Mauritanian government. From the darkness of my prison cell, I appeal to them to use all legal and diplomatic channels, including the suspension of financial aid, to push the government to stop the repression and take serious steps to eradicate slavery, and the racism and exclusion that underpins it.