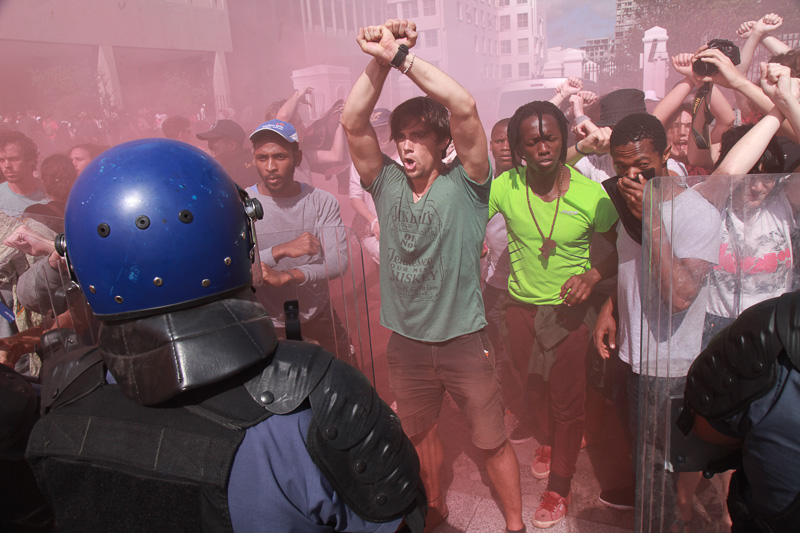 Political parties debated the call for blanket amnesty for #FeesMustFall (FMF) activists at a National Assembly plenary sitting. In spite of the announcement of a new free higher education policy in December 2017, many activists have been charged with public violence and destruction of property in the protest action during the 2015 and 2016 protests. Activists have been appealing for a presidential pardon for the offences committed, but a number of political parties view the appeal as illegitimate.

As it stands, according to statistics revealed in the sitting, 951 students were arrested and 350 withdrawn. Nine activists were convicted and eight remain in court.

The EFF supports the call for amnesty

Economic Freedom Fighters (EFF) MP Mbuyiseni Ndlozi was the only member resolute in his support for the activists’ amnesty. Ndlozi said to Members of Parliament: “Had you come here to work, #FeesMustFall would not have happened. Had you come here to become the parents whose role and responsibility is at all times to secure a future for the young, you would have known that you have to prepare universities so that they are accessible particularly for the black talented youth. Instead, you came here to sleep.”

The EFF has always supported the FMF movement and has been calling for the state to drop all charges against the activists. Ndlozi reiterated in parliament that the EFF is calling for all charges and sentences against the activists to be dropped with immediate effect, “particularly by the universities that have expelled all these activists, let all those expulsions fall. Allow the children to come back and focus on their studies”.

[IN CASE YOU MISSED IT]: “Had you focused on your responsibility to secure a future for the black youth, there wouldn’t have been a #FeesMustFall.” – Commissar Dr Mbuyiseni Ndlozi pic.twitter.com/PA51tU8K7S

Ndlozi also said that opponents of amnesty spoke about the fundamentals of our Constitution, “but they deliberately ignore the hard truth, that all these rights were brought through by destruction of property, infringements of individual conveniences called rights”.

The rest of the political parties are not convinced

“The damage that was done during these protests amounts to R800 million, which is enough money to help 8000 students obtain degrees. Parties like the EFF, however, do not seem to comprehend this. They are stuck in a revolution,” the Freedom Front Plus said.

The Democratic Alliance (DA) unveiled the costs of the damages of FMF protests to universities. It held that students must not be turned into martys.

The Inkatha Freedom Party’s Mkhuleko Hlengwa also highlighted the millions of rands in damages caused by FMF. He said we must separate protests from criminality before we discuss amnesty and supported that due legal process must be followed.

Nqabayomzi Kwankwa of the United Democratic Movement (UDM) said the UDM does not support blanket amnesty for FMF activists as some cases were criminal. “It must be on a case by case basis,” Kwankwa said.

The African National Congress’s Leonard Ramatlakane said the ruling party does not support violence used in the protests. Ramatlakane said the Constitution is clear that everyone is equal before the law and does not allow for the get out of jail free card to be evoked to anyone as this would lead down a slippery slope of democracy.

“If you break the law, you must be prepared to do the time,” Ramatlakane said.

The Justice Ministry will not grant reprieve

The justice minister Michael Masutha said he did not commit to violate or undermine the criminal justice system and undermine separation of powers. Masutha said the department has no mandate to give reprieve to anyone.

In August, Masutha announced that the justice ministry would assist students to approach the National Prosecuting Authority for a review of prosecutorial decisions.

The debate came a couple of weeks after Masutha proposed to students that they must constitute a delegation which will provide a list of affected students. The ministry will help the students to approach the National Prosecuting Authority and to get their cases reviewed, he had said.

FMF activist Bonginkosi Khanyile said that the students were not pleased with the outcome of the meeting.