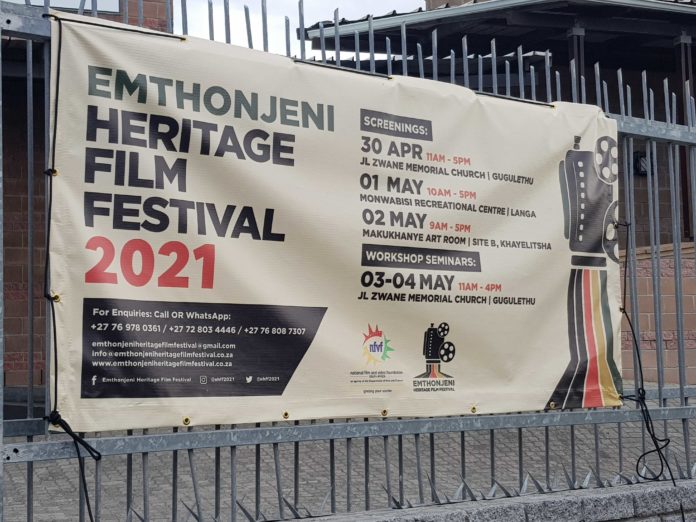 Held over four days last week, the Emthonjeni Heritage Film Festival in Cape Town showcased films of heritage and historical relevance. Ling Shepherd attended the festival and found it to be educational and cathartic.

Film festivals in Cape Town are usually concentrated in the CBD of Cape Town. The Emthonjeni Festival was held in Gugulethu,Khayelitsha and KwaLanga – historically Black townships in Cape Town. The location is very significant as it was accessible, and at best one taxi away. If you live on the Cape Flats accessible transport is key. The festival was established in 2020 due to lack of film opportunities and platforms for township based filmmakers. Through the years a rise of filmmaking in the townships of Cape Town has emerged. These filmmakers do not have access to film festivals and yet have continued to produce amazing films.

The aim of the festival was to celebrate township filmmakers and showcase their films through collective and individual expressions of heritage- by exploring the importance of heritage, issues of identity, language, customary issues, leadership and historical relevant issues.

A call for submissions was made in March 2021, and the line-up was an impressive selection. Short films, full-length films, documentaries and animation were allowed to be submitted.

One of the films showcased was Afrikaaps by Dylan Valley. Dylan Valley is an award-winning documentary, and is currently a Lecturer at the Centre for Film and Media Studies. Valley’s documentary follows a group of local artists as they trace the true roots of Afrikaans- while conceptualising a stage production. It features musicians like Emile XY(from Black Noise), Jitsvinger and many others. The film unearths the true origins of Afrikaans, and affirms the use of the many variations of Afrikaans spoken in South Africa.

From a young age and growing up in the Eastern Cape she had immersed herself in the craft of traditional beadwork, dance and all things associated with Xhosa heritage. Her short documentary film Buyelembo explores going back to your roots, and answering the relevance of tradition in a modern era.

The full line-up of showcased films can be viewed here.

The workshop element from the Emthonjeni Heritage Film festival was incredible; covering script-writing and funding your project. A  presentation by the National Video and Film Foundation (NFVF) was very well received.  The NFVF had a two-hour presentation about their partnership with Netflix – to fund first-time and established filmmakers’ projects. It covered all the administration and requirements for submission. It was perfect for anyone wanting to learn about the industry. The talk also covered the importance of Film Festival Funding.

The visit to the festival was a day well spent. The only criticism would be that it needed more support from audiences and filmmakers. We need to engage within our communities to ensure the Arts stays nourished. The accessibility to the festival also stood out for me. As someone who lives on the Cape Flats and relies on public transport regularly; it was refreshing to not have to travel for hours to get to an event.

Gugulethu is ten minutes away from my home. Emthonjeni is an isiXhosa word for fountain/water or spring. It refers to the water from the natural springs that offer life, nurture & health. The Emthonjeni Heritage Film Festival does just that; it nurtures the importance of film that focuses on our collective heritage.

We look forward to the festival in 2022.