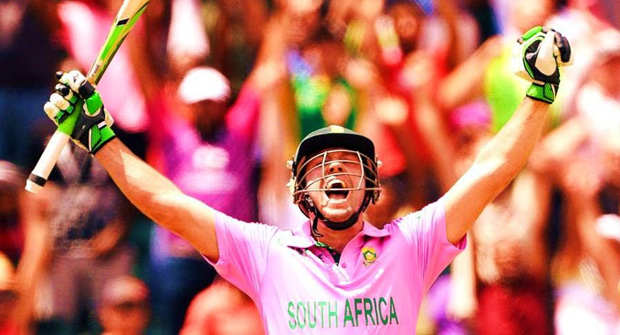 Muslims across South Africa heaved a sigh of relief after it emerged that Proteas ODI cricket captain AB de Villiers does not support the Israeli state.

After de Villiersâ€™ record-breaking innings at the Wanderers on Sunday, rumours began circulating on social networks that the swashbuckling hero was too good not to be Zionist.

The talk instilled fear into the hearts of tens of thousands of hojabis across the country.

But cricket insiders denied that any link existed between de Villiers and the Israeli state. â€œAB might be Afrikaans but he likes to moer the ball, not Palestinians,â€ a close associate said.

Unknown to most South Africans, de Villiersâ€™ hero â€“ the legendary Jonty Rhodes â€“ is a supporter of Israel and travelled to the occupier state in 2008 to play for a special Israeli XI against the India A team â€œto mark the 60th anniversary of Israelâ€™s foundingâ€.

Rhodes, renowned for his athleticism on the field and cagey batting, has previously described Israelis as â€œtenacious to be able to make a living in a really harsh environmentâ€.

It is understood that at the time, the BDS movement in South Africa was too busy planning its anti-Woolworths campaign to pay attention to this outrageous move from Rhodes who, being South African, ought to know better.

Rhodes was part of the first cricket squad in 1991 after the Rainbow nation was admitted back into the international fold following sanctions against the apartheid state.

De Villiersâ€™ associates, however, remain adamant that the swashbuckling Christian has little regard for politics.

Wayne Parnell converted to Islam in 2011 but some Muslims say he has been a disappointment. â€œExcept for the beard, what has he done?â€ Ayesha Hassim, 24, a cricket fan in Augrabies in the Northern Cape said in a message sent via telegram.

But most fans agree that a pro-Zionist AB might have been too much to bear. â€œIf it emerged that he was Zionist, I think Muslims themselves would have enlisted for mass conversion,â€ said Omar Khan, 23, a cricket fan from George.