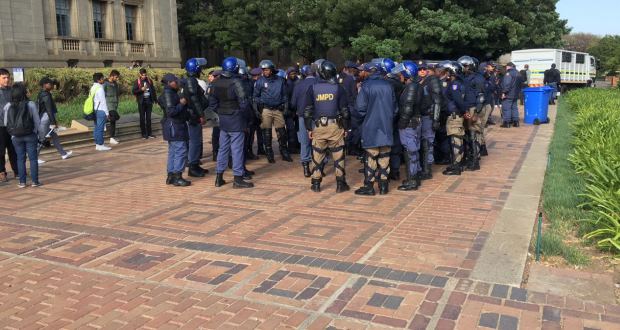 Tear gas, stun grenades and rubber bullets have beenÂ fired to disperseÂ a large group of students protesting on the Braamfontein campus of the University of Witwatersrand on Tuesday. Two students were also arrestedÂ earlier in the day. One of those arrested is Catherine Busisiwe Seabe, one of the leaders of the student movement at Wits, who is also named on the interdict that prohibits students from disrupting academic activity at Wits.

The universityâ€™s academic programme resumed on Tuesday with a â€œfull security contingentâ€, according to VC Adam Habib.Â Staff, however, have been back at work since Monday, though protesting students went around campus and stopped some of them from working.

In a message to staff and students, Wits management appealed to staff to remain indoors and “close and lock doors”. Speaking on ENCA, Wits spokesperson Shirona Patel said Wits was not opposed to protests taking place, but rather sought to ensure the academic programme continues.

“Wits said we will work with students but we disagree with losing the 2016 academic year,” she said. “We don’t believe in the tactics, and holding students ransom. We have no problem with protesting as long as it doesn’t infringe on other students learning, which unfortunately didn’t happen this morning.”

She also warned that if protests continue, the university would be forced to annul the current academic year.

“If we can’t get the academic programme on track soon, we are forced to put the academic year on hold. Residences will have to be cleared by the end of this week,” she said.

Students began gathering early on Tuesday, outside the Great Hall, and were then told by police that they could only stand in groups of two. After an hour and a half of singing, police told students to disperse, and then threw stun grenades at the group of students.

Kelly Gillespie, a senior lecturer in the Department of Anthropology said the police presence on the university impeded the role of the university as an autonomous placeÂ for the free sharing of ideas.

â€œWe cannot teach and learn under these conditions, weâ€™re creating a police state on our campus,â€ she said. “Just a year ago we were making the argument that there should be no cops on campus, that universities should not have a security presence on campus. I mean look at this now, this cannot be the solution.â€

Overnight, student leaders had gathered at Solomon Mahlangu house, singing and planning further protest action. Earlier in the day, student leaders attended the Fees Forum called by President Jacob Zuma in an attempt to hand over their model for free education to the president and higher education Minister Blade Nzimande, but Â were unsuccessful.