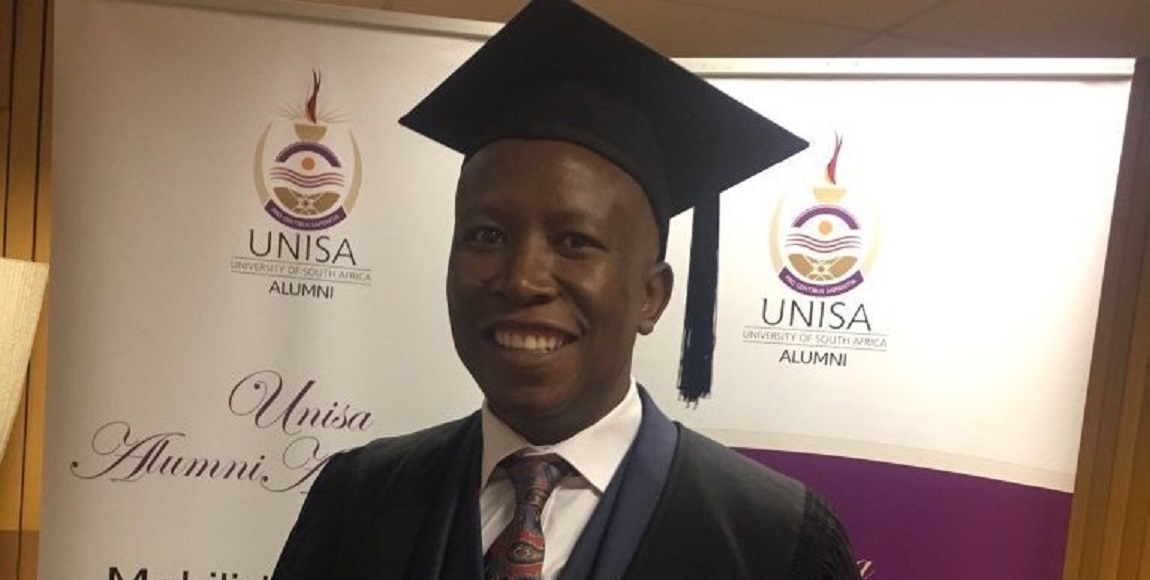 #BlackExcellence was in full force at the graduation ceremony of the Economic Freedom Fighters (EFF) commander-in-chief Julius Malema on Wednesday. Juju was awarded an honours degree in philosophy from the University of South Africa (Unisa) and social media could not contain their excitement. The Daily Vox Team rounds up.

Must Watch: Our CIC @Julius_S_Malema being awarded his degree of BA Honors in Philosophy by UNISA #MalemaGraduation pic.twitter.com/avCwHFIv5K

Images of a suited, gowned and capped Julius Malema getting his degree flooded the internet on Wednesday night.

The moral of the story here is simple: surround urself wit people that seek the same wisdom as yourselfðŸ™Education is power #MalemaGraduation pic.twitter.com/2ibeLPb1CJ

Those images were far removed from the reports of yesteryear detailing Malema’s dismal matric results, which plagued him early in his political career. Malema’s high school report card was flaunted nationally when it was discovered that he achieved a G in woodwork and an H in maths, both on the standard grade.

Now, the man whose academic underachievement was used to undermine his political views holds two degrees – Malema completed a BA degree in political science at Unisa in 2016 – and Twitter is here for it.

They made jokes about him for failing wood work. Kanti was only destined for much greater than that. Slay black child.#MalemaGraduation

â€œThe first duty of a revolutionary is to be educated. One cannot lead a revolution through common sense or gut feelings.” Che Guevara,Salute

Malema may not be everyone’s favourite politician but his educational journey is one that all South Africans can get behind. In a country where young people have to struggle against often insurmountable odds to make it through a dysfunctional school system, Malema’s achievement shows that your matric results don’t define you. There is life after high school, even if you do badly.

Julius Malema is living testament that against all odds, material conditions & public nullification one can still rise. #MalemaGraduation ðŸŽ“âœŠ pic.twitter.com/3XgGqM7VKA

Malema is not the only EFF member to have displayed academic excellence. EFF national spokesperson (aka the People’s Bae) Mbuyiseni Ndlozi was recently awarded a doctorate of philosophy in political studies from the University of Witwatersrand. EFF deputy president Floyd Shivambu meanwhile holds three degrees from Wits University, including a bachelor’s, honours and master’s in political studies.

It is with humbling joy to receive news from @WitsUniversity that I have completed the degree of Doctor of Philosophy in Politics (PhD) ðŸ™ðŸ¿âœŠðŸ¿ pic.twitter.com/YG7GHztRew

Malema’s achievements show that failures in the past don’t always determine the future and that with tenacity and the right opportunities, anything is possible.

From all of us here at The Daily Vox, well done Malema. Keep slaying!