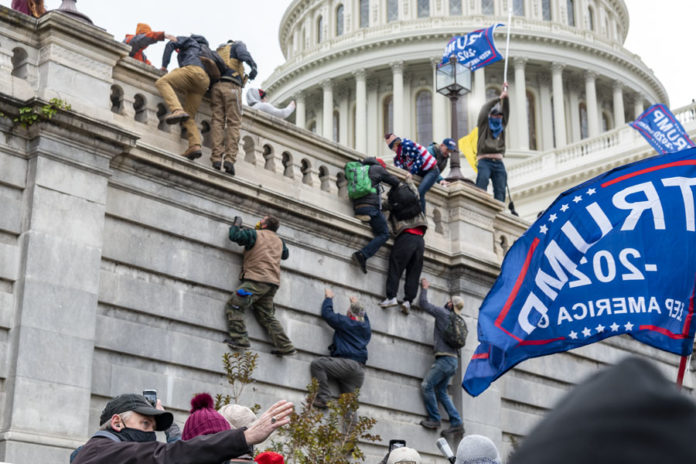 Amid the maelstrom of footage emerging from the 6 January insurrection at the US Capitol in Washington DC, a video of a white South African rioter emerged, much to the surprise of many South African observers.

In the 50-second rant, which originally aired on the pro-Trump cable channel One America News Network and went viral in South Africa, the man introduces himself as bringing a ‘message’ from his country.

He goes on to shout, “for every one of you senators, and every one of you congressmen out there, we [sic] watching, we’ve had enough, OK?… don’t tell us what to do anymore… all you bunch of rhino arseholes, we’re watching you today!”

The video is one piece in a long trail of evidence that connects white ethno-nationalist extremists in South Africa with QAnon conspiracists and white supremacy groups in the United States.

The South African origins of QAnon

According to journalists Brandy Zadrozny and Ben Collins, Furber and two other original 4Chan contributors grew the conspiracy in order to build a following for Qanon, and also for themselves. Furber reportedly confirmed these accounts to the journalists by email saying, “A bunch of us decided that the message needed to go wider so we contacted YouTubers who had been commenting on the Q drops.”

Furber’s recent activity on the new radical-right social networking platform, gab, indicates that he is revising and reviving expired QAnon theories – particularly those that failed to come to fruition at the inauguration of Joe Biden on 20 January, which left many QAnon followers in disbelief and disarray.

The day after President Biden’s inauguration, Furber posted a message claiming that “Trump still has the nuclear football… Real Joe is either dead or in Gitmo [Guantanamo Bay detention camp]. The LARPer [live-action role player] currently playing him was not sworn in legally by definition… Stay strong, stag vigilant, stay restrained, stay faithful”.

These theories have been revised and updated in current QAnon conspiracies in the country, which claim that the Black-majority government is conspiring against white South Africans and the country as a whole.

Theories that the government is enabling and encouraging the murder of white farmers and the seizure of white-owned land have bled into theories that the country’s current president, Cyril Ramaphosa, is plotting a New World Order (NWO) with wealthy US co-conspirators such as Bill Gates, a familiar figure within American QAnon conspiracy.

South African adherents of this conspiracy believe that “The NWO demands that a financially independent, educated, civilised, disciplined and religious world be replaced (reset) in favour of a black financially dependent, vaccinated, microchipped, brainwashed future generations controlled by a police state.” This homegrown adaptation of QAnon mythology offers an explicitly racist version of the conspiracy theory, naming blackness as a defining characteristic of the supposed enemy/oppressor.

Entangled with conspiracy theories about the African National Congress and the New World Order is the mythology of “white genocide”. Over the past decade, far-Right South African groups such as ‘Solidarity’, ‘Afriforum’, and ‘Suidlanders’ have increasingly presented “Afrikaners as a threatened minority on the brink of extinction to the world”.

Online platforms such as YouTube and Twitter, as well as various websites and blogs, have been virtual organisational fields in which imaginaries of white plight have fomented. The South African fact-checking organisation, Busting the Myth of White Genocide, has been an important intervention in debunking the claims, images and figures used by right-wing groups and campaigns to spread disinformation and anti-Black racism.

In addition to online campaigning, some of these radical right-wing South African groups have travelled to the US in efforts to gain exposure for their cause and expand their organisational networks.

In 2017, leadership from the ultra-conservative Afrikaner nationalist group, Suidlanders, toured the US, meeting with conservative organisers and journalists in order to spread false claims that white South African farmers are victims of genocide.

One year later, the founders of far-Right anti-land-reform Afrikaner rights political party, Afriforum, also toured the US, networking with prominent conservatives. During their visit, Afriforum co-founder Ernst Roets was interviewed by Tucker Carlson on Fox News, where he raised alarm about “South Africa’s brutal farm murders”.

After their tour, the then president, Donald Trump, tweeted that he had instructed the US secretary-general, Mike Pompeo, to investigate “the South African land and farm seizures… and the large scale killing of farmers. SA Government is now seizing land from white farmers”.

In the US, ‘white minority’ status plays to a demographic fear that has long haunted American white supremacist imaginaries of their replacement by Black, mixed-race, Hispanic and Jewish populations.

Anxiety about white replacement is a central trope within the rhetoric of many white supremacy groups in the US, such as the Proud Boys. The mythology of white genocide in South Africa – while having no empirical basis – provides an ideologically lucrative illustration of white victimhood, which can be used to substantiate and catalyse white ethno-nationalism elsewhere.

Such narratives are nothing new within ‘settler consciousness’. Throughout the history of settler states such as the US, South Africa, Australia and Canada, real and imagined threats of indigenous and enslaved people have triggered frequent panics among European settlers, ultimately leading to the creation of more stringent and violent forms of colonial control.

The recent rise in information-sharing between US and South African far-right groups expose some of the new channels through which transnational white supremacist anxieties and imaginaries are actively reinforcing their ideological connections and more importantly, how they continue to mutually reinforce and invigorate one another.

This article is republished under a Creative Commons Attribution-NonCommercial 4.0 International licence from Open Democracy. Original Link: The global cult of white supremacy: How the South African radical right is bolstering US extremism