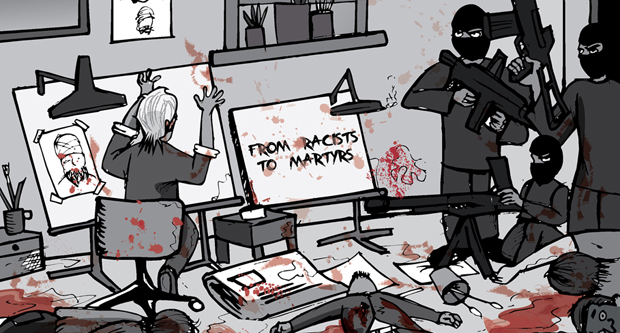 I am a writer, a journalist, even a satirist sometimes. I understand the value of freedom. And I also understand that part of our responsibility is to defend most precisely that which we do not agree with. Similarly, it is incumbent on us to call bullshit when we see it, argues AZAD ESSA.

The events of the past two days have left us startled, angry and confused.

By now, it is common knowledge that two men walked into a magazine office armed with AK47s and opened fire on a group of writers, artists and satirists in Paris.

Then, in a subsequent shootout with police officers, one attacker approached an injured cop, and casually fired a single shot into the back of his skull. No mercy. He was executed.

In total, 12 people were killed, 11 others injured.

Within an hour, the French President Francois Hollande named it a â€œterrorist attackâ€.

In the frenzied hours following the attack at the Charlie Hebdo office, the masked assailants were identified. Their mugshots lingered on news channels and websites. The search was on to find the suspects. Â But no real explanations were offered as to how their identities had been determined.

Charlie Hebdo has endured a tense history with irritable Muslims since it first published a cartoon of the Prophet Muhammad in 2006. This week’s attack then, replete with the requisite chants of â€œGod is greatâ€ and talk of avenging the Prophetâ€™s honour, was easy to understand.

Naturally, the carefully orchestrated attack immediately became yet another example of an irreconcilable, vengeful Muslim, upset on behalf of the unseen and willing to kill for it.

Before long, it was depicted as an unparalleled war on the freedom of expression.

But it is worth looking back at the facts.

Two men murdered 12 people in an attack on the magazine’s office; why then has it been labelled a terror attack and not a heinous, brutal murder by two idiots?

Is it because some Muslims have burnt flags, marched to embassies and descended to the streets en masse each time there has been a cartoon or movie or satire that has offended them? Possibly. But how does this incident naturally transform from an act of two individuals into massive war against European values and, more specifically, freedom of expression?

Moreover, how did it escalate into a larger discourse of â€œusâ€ versus â€œthemâ€; how did an entire religion get placed onto the stand for a public whipping, when it is ultimately just these two men who must be arrested and punished if found guilty?

To suggest that this is about irreconcilable values, an attack against the freedom of speech and expression is a farce. It is also a corpulent, untruthful summation of European values, which are liberal only when it benefits those in power.

It is a criminal offense to deny the holocaust in Western Europe. InÂ France in particular, religious attire of a certain type is unlawful. The colour of your skin in Germany or the wrong amount of facial hair on the wrong skin colour in Belgium can undermine your opportunities for employment, earning a promotion or renting an apartment.

Non-European values are unwelcome here in the land of liberty. France and Britain continue to involve themselves in American-led wars abroad, while maintaining an ambiguous policy for migrants trying to flee their war-torn nations. For the past 14 years almost eight peopleÂ have died every day trying to reach wealthy countries, particularly those in Europe.

Interestingly, in June 2014, France became the first country in the world to outlaw pro-Palestine protests. At the time, referring to the decision,Â French Interior Minister Bernard Cazeneuve said: â€œI consider that the conditions are not right to guarantee security.â€

So, if freedom of expression and equal access to opportunity are not givens, and universal human rights is part of political expediency, how then is this attack a bombardment upon those values that donâ€™t even fully exist?

To be sure, framing these attacks as an attack on freedom of expression is a diversion tactic.

It seeks to find simplistic explanations in an â€œusâ€ versus â€œthemâ€ rhetoric that has little relevance to the lives of many of the criminals who commit these crimes. What the diversion does is take away attention from the roots of discontent and yes, violence, among many Muslims today, be it in the suburbs of Paris or the streets of Gaza.

Again, we donâ€™t want to talk about causality, because this raises uncomfortable questions about the legacies of colonialism, racism and economic exploitation that remain firmly enmeshed with the ideas purported by the very same Western liberalism that shouts â€œfreedom of expression!â€.

These populations are traumatised. And from traumatised communities emerge these acts of violence that seem senseless and barbaric.

One thing must be noted: yes, those cartoons offended many, many Muslims. But a vast majority do not see these attacks as being justified. For many, they are politically, not religiously motivated. What the cartoons symbolise and represent, in a global war on terror, which is increasingly being seen as a global war on Islam, is just another peg in a list of grievances that Muslims feel is being imposed on their identities and faith worldwide.

I must admit, these are precarious waters to tread. I am a writer, a journalist, even a satirist sometimes. I understand the value of freedom. And I also understand that part of our responsibility is to defend most precisely that which we do not agree with â€“ to muzzle dissent is to fuel anger. This is the nature of our craft. Similarly, it is incumbent on us to call bullshit when we see it.

There is an alarming hysteria around the heinous attack. A number of mosques have been attacked in France.

Lives have been lost, as hundreds and thousands are every day in cities and towns and villages across the globe â€“ to crime, war, disease and famine. Yet, how is it that these daily routines do not set in motion immediate meta-narratives of human incompatibility? Is it because these happen in towns with names like Bangui or Beni, where life is cheap and ideology irrelevant?

Something is certainly not right.

To attach extra significance to the wretched tactics of two men, and to suggest a greater war on freedom of expression, is to falsely sanctify an often reductionist and racist outlook to European integration. Crucially, the hysteria to â€œIslamiseâ€ a crime that is unlawful within Islam itself is to bring to life the very racist archetypes in the cartoons, as pointed out by their detractors â€“ some Muslims, secular leftists, and cultural critics.

Letâ€™s be clear, these cartoonists did not deserve to be silenced. They were certainly not the avant-garde of European enlightenment and thereâ€™s no reason to exaggerate their contribution, or turn their projects into a shrine. Their reactionary work was neither crucial nor important to the larger discussion in a rapidly-changing Europe. But it was a voice, nonetheless, and sometimes, a dark and funny one.

These killers, who had more in common with boys in the hood than your typical Islamist in Raqah, held no mandate other than their own.

If anything, the global media and analysts are only personifying their own internal bias towards Muslims, in what is otherwise known as Islamophobia.

Unfortunately, and this is the crux, nothing less than fear, hate andÂ distrust of Muslims lies at the very heart of this knee-jerk discourse,Â which does nothing to enhance or forward a meaningful discussion. Azad Essa is a journalist at Al JazeeraÂ and an executive editor at The Daily Vox.

*Update: A source at Al Qaeda in the Arab Peninsular (AQAP), operating in Yemen, told The Intercept late on Friday that the suspectsÂ were working under an AQAP’s directive to conduct the operation.