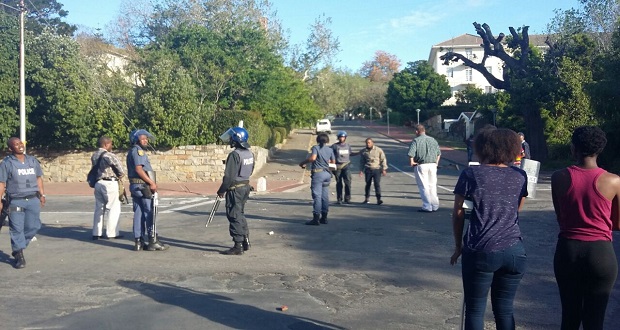 For the past six weeks, students at the university currently know as Rhodes (UCKAR) have been protesting as part of the #FeesMustFall movement and have done what they can to bring attention to their cause by any means necessary. But Trisha Lerato Mpofu says that the university is maintaining its silence as clashes between students and police increase.

The protests have become violent; windows have been broken and property has been damaged. The turn to violence started on the 28th of September when student protesters had their first major run-in with the police. Despite the numerous CCTV cameras on campus, no concrete evidence has been provided to show which protesters were responsible for the property damage on campus, if they are. Yet police have escalated the violence against students and the universityâ€™s management team has remained tellingly silent.

On 28 September, students at UCKAR had one of their first significant run-ins with the police related to the #FeesMustFall protest. Police fired rubber bullets at students and deployed stun grenades after students allegedly threw rocks at police. The response was not equal to the provocation.

In one instance, a police officer shouts at a student to put down a bottle. What is not shown is that the threatening bottle is an empty 500ml plastic water bottle. A silent protest took place after this incident at Drostdy lawns where the shooting occurred, to oppose the degree of force the police had used. A month later, there is a heavy police presence on campus and students have complained of growing antagonism and violence from police.

On Tuesday, 25 October, students met to discuss the way forward over the examination period. During or after the meeting (there are conflicting reports), a student who had been present at the meeting allegedly jumped onto a truck with building materials (bricks) which prompted the police to open fire.

It was allegedly the action of a student jumping onto a construction truck that caused police to start shooting. #UCKAR #Fees2017

The police used stun grenades and fired rubber bullets to disperse the students.

But police were still firing on students three hours later; this surely cannot still be referred to as dispersal techniques. By that time, both protesting and non-protesting students were terrified, hiding and running for safety from police (not from other students).

The police officers currently on campus are believed to be a mix of officers from the local Grahamstown Police Station as well as Public Order Police who have been brought in from neighbouring towns, including Queenstown, which is two-and-a-half hours away.

I have failed to see the order or the safety they have brought to campus. If anything, with their indiscriminate shooting, have brought a new wave of disorder and have escalated the situation.

Late into the night of 26 of October, there were several reports of incidents with the police, including claims that students were being searched, harassed, threatened and intimidated as they tried to exercise one of their constitutional rights – freedom of movement. One of the police officers – referred to on Twitter as â€œthe officer in Adidas shortsâ€ – was reported to be drunk on the job.

On 26 October, at a press conference concerning allegations of police brutality, lecturers, student leaders and student journalists gave accounts of police brutality they had encountered the day before. Present during the meeting was the Independent Police Investigative Directorate (IPID) who were called in by the lawyer representing the UCKAR FMF students.

The stories presented were harrowing. A lecturer spoke of being shot while trying to help students seeking protection from the flying bullets. A student reported being shot six times while trying to record the events that were unfolding, and told how a student journalist had been arrested while doing the same.

Some hours after the conference, the sound of stun grenades being fired could be heard on campus and shockingly, the same scene unfolded. Terrified students ran and hid, most tried to leave campus. A barricade that had been set up by the students earlier during the day was on fire, police had blocked off the intersection of Prince Alfred and South Street, a road many students need to traverse in order to get home, and had closed off an area around a university residence, where both protesting and non-protesting students live.

Again, studentsâ€™ movements were restricted, which put a lot of students who live in residences on campus in a catch 22. Meals had been cancelled and they had to go to town for food as takeout outlets were not delivering food to campus. However, being outside put them at risk of getting shot at or tear-gassed, and they were encouraged to stay indoors.

Police were seen in the campus protection unit vehicles and in the backs of private security company Hi-Tecâ€™s bakkies, driving around off-campus and looking for students – any students. Departments on campus were locked and students had to remain either off-campus or in residence to stay safe. But even those in residences could not be guaranteed safety, as some officers were shooting rubber bullets into windows and onto porches.

Through all of this, the universityâ€™s management has been eerily quiet, bar some SMSes letting students know two hours later that there had been clashes on campus between police and students, and urging us to stay indoors.

We are still waiting for communications concerning the negative effect that police and private security have had on student safety. The violent atmosphere on campus has caused irreparable damage to peopleâ€™s psyches, yet all we see and hear about from management is the damage to property. Most communications to students have simply relayed information on examination rules for those who are writing, which now include pre-exam pat-downs. The most recent communication I saw concerned new arrangements for exams, some of which will now be written in January.

Students who want to write their examinations in January need to go to Student Bureau to sign a declaration by 17h00 today.

It is indeed business as usual.

Trisha Lerato Mpofu is a 2016 Mandela Rhodes Scholar who is currently in her final year of Master’s at the University currently known as Rhodes. Her research focuses on microbial fuel cells, their various applications in renewable energy, bioremediation of wastewater and integrating them into the community. She is passionate about Africa and believes there is a disconnect between the science world, economy and how science is perceived by society and believes that science can contribute meaningfully to the plight of the African citizen.

Featured image by Mishka Wazar, video via the Oppidan Press on YouTube