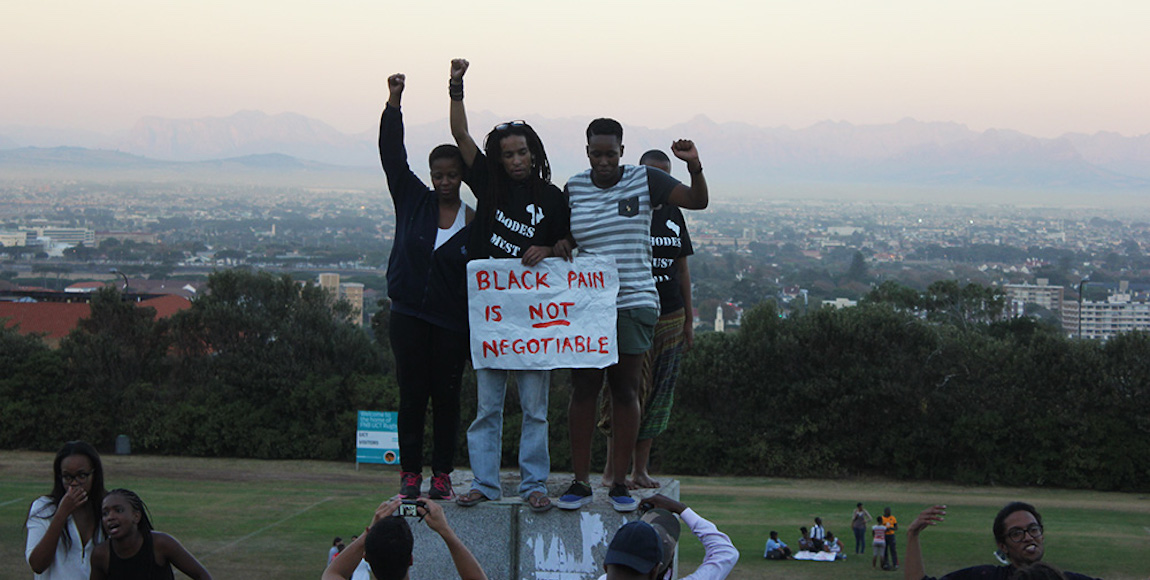 The grief that the international community is feeling because of the COVID-19 pandemic is not at all exceptional. In fact, those without the experience of coloniality and subservience cannot scale up the level of grief that they feel now, to the lifetime of grief and affective disorders given to African people.

The world that I speak of here is not the abstract, political or philosophical space for (irreverent) human activity, interaction and the systems of power and dominion that have been developed by coloniality. I speak of the marble that orbits the sun — the world as that which holds us, as humanity and as the un-human.  The world is giving itself the love that has been taken from it.

Here’s to the world not revolving around us.

That’s the loss we have to live with. A loss and grief that Black life is no stranger to.

Black people have been subject to many a lifetime of subservience and servitude. Black women have disproportionately experienced the historical and contemporary realities of racial, classed and gendered oppressions. Through the othering of people constructed as different and therefore inferior to the standard of whiteness, the world sympathises with blackness as many of its own properties are exploited and degraded in a capitalist society. The world and us share some things in common: trauma, loss and grief.

African countries, like South Africa, with a deeply troubling past of colonisation and consequently violence, would be expected to experience grief differently in comparison to the Global North. The loss of a very basic sense of self, dignity and liberty, as the fact of blackness, in many African contexts is a source of generational and collective grief. The grief that the international community is feeling because of the COVID-19 pandemic is not at all exceptional. In fact, those without the experience of coloniality and subservience cannot scale up the level of grief that they feel now, to the lifetime of grief and affective disorders given to African people. That is to say that the magnitude of grief that can come from an alienating and fatal global pandemic can never be compared to the loss of life and dignity resulting from white superiority and colonial-capitalist domination. Black people are not afraid of a pandemic. Marginalised people are afraid of people, because of what they can do and because of what they have done.

While South Africa has very obvious class-based and economic struggles that are further worsened during the COVID-19 outbreak and the subsequent regulations legislated to contain the spread of the virus, something more troubling lurks the elusive South African nation. That something is the long-standing, inter-generational grief over colonial and apartheid injustices. The ways in which COVID-19 is presenting as a threat, as ‘real’ danger and as fatal is the perpetual condition of what it means to be the other, to move in the world as other. As a black woman and young feminist in South Africa, the non-lived memory and collective trauma of being Black and being a woman in apartheid and post-apartheid South Africa seems to surmount my own fear of the actual virus. In fact I think that in some ways, and through my own relationship with grief, we are able to partly account for why there has been some continuation of human activity and interaction in many townships despite lockdown regulations in South Africa. Apart from the fact that informal business trade in many townships is the lifeline for many low-income households, the very nature of township spaces negates the exceptionalisation of grief as a response specific to COVID-19.

It would be erroneous to ignore and not acknowledge how township life in South Africa is rooted deeply in apartheid sentiments of needing to ‘divide and conquer’. Townships develop from a lineage of segregation as a condition of colonialism. Poor living conditions of many townships across South Africa are further exacerbated during the pandemic although they remain worse so ‘off-peak’ as well. But the systemic, symbolic and physical violence that has ensued in, through and because they are townships has caused so much trauma and loss and grief as a result, that the fearful nature within which the rest of the world is responding to COVID-19, feels almost historically inept and ignorant of present realities. The filth and dis-ease from poor sanitation, poor service delivery, overcrowding in make-shift houses in many townships and rural areas not only make social-distancing and good hygiene near-impossible; they are also a source of grief.

When you inherit grief over the hard, metal taste of your ancestry’s blood on the teeth of a German Shepard with a vicious bark, candidly, through the memory bank of your grandmother, sits on your skin as the hairs on the small of your arm stand in fear of the sight of a dog…even in the distance, even in ‘new’ South Africa. Where women and children reported missing prior to COVID-19 responses remain unfound and unaccounted for, grief remains occupied by that loss. When the pages of a book where uMama gave birth standing upright with her hands shacked up in a jail cell smell like her sweat, the grief of COVID-19 is but a preface to Black survivance. Of course being Black is not monolithic. Neither do I suggest that trauma is experienced in the same ways and through the same things in Black communities. What I am saying is that trauma, loss and grief are how we know we are Black. Trauma and grief are epistemic.

So, if there have ever been questions about why Black people fail to ‘comply’ to the regulations put in place to flatten the curve, think not only about the material, psycho-social and generational conditions of Black people, but also about grief as the one certainty of being Black. Privilege performs grief over COVID-19 as an exceptional experience of trauma and loss — but the point of marginalisation is to make it impossible to identify with marginalised people. How then can there be a claim to global grief on the scale that it is being sold to us?

The world is responding and reclaiming and rebalancing through COVID-19. Black people are still struggling during this time and for the first time in South Africa, the very center of power cannot hold the loss of its lifestyle and privilege during this pandemic. Can we allow ourselves to believe somehow, the world and all of its nature is intervening for us? As us?  This may be incredibly cruel optimism but, it’s the little bit of optimism and compassion that we need to co-construct a world where Blackness is as magical as we say it is.

COVID-19 is the world practicing self-love and self-preservation. The world is dignifying itself and dis/articulating un-humanity from itself.