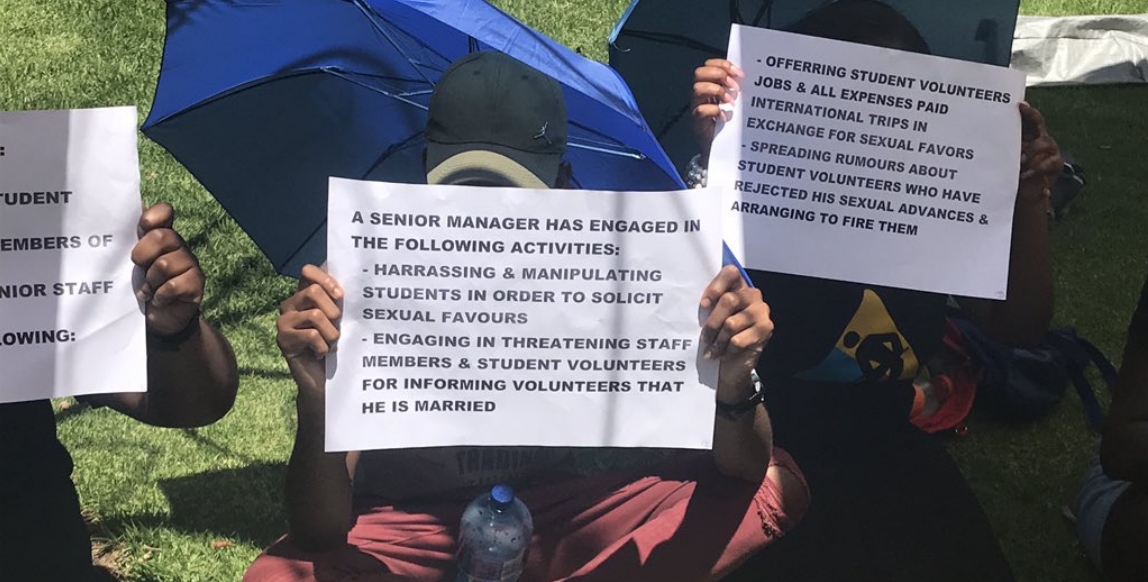 UPDATE: The senior manager accused of sexual harassment and assault at the University of Pretoriaâ€™s (UP) Centre for Sexualities, AIDS and Gender (CSA&G) has been dismissed, UP spokesperson Jocelyn Newmarch confirmed on Monday.

This decision was taken almost six months after the protests against the perpetrator – and after due disciplinary procedures were taken.

with the same energy i used to tweet about the lack of action taken by the university against the #TuksPredator Sydney Montana last year, i am pleased to update you all that he has been dismissed ðŸ‘ðŸ½ thank you @UPTuks

University of Pretoria (UP) staff and student volunteers held a silent protest against an alleged sexual predator at its Centre for Sexualities, AIDS and Gender (CSA&G) on Monday.

The group of about 30 held a silent demonstration in front of the CSA&Gâ€™s building on the Hatfield campus on Monday. They were protesting the recurring presence of a senior staff member at the Centre, who they had accused of sexual harassment and assault, despite his suspension.

The group met with senior staff to report the senior manager on August 4. They allege he had engaged in:

A volunteer at the centre, who is also a student at UP, told The Daily Vox he was her superior in one of the projects he managed. She confirmed the allegations in the statement. â€œHeâ€™s using his work position to entice people into getting into these relationships with him.â€

several volunteers haven’t been to work at the centre as they’ve been afraid to be in the midst of #TuksPredator.

UP spokesperson Candice Jooste said the university is aware of the sexual harassment case. She said the complaint was lodged in July.

In August, the protesting group held a session with CSA&G director, Mary Crew where they expressed their grievances. Jooste confirmed that the senior staff member had been suspended pending a disciplinary enquiry.

However, he has returned to the premises two times since his suspension. The student volunteer said the group felt â€œscaredâ€ that he was able to access the building. The group said no warning was given to the affected student volunteers and staff members and no measures were put in place to protect them.

The CSA&G said it was sad and disappointed about the complaint against its staff member. â€œAs a Centre committed to gender justice this is embarrassing and contrary to what we stand for in terms of our core values,â€ it said.

The CSA&G said it supports the rights of students to protest and is a positive outcome of its work to train students in activism. It said it had dealt decisively with a previous, unrelated, case of sexual harassment and acted with great urgency when the current matter was brought before them, insisting the university investigate the matter in terms of the sexual harassment policy.

â€œWe have grown impatient with the process and tried to urge its speedier resolution, in the interests of fairness for all and mindful that this is very stressful for complainants,â€ it said. Jooste told The Daily Vox due process is being followed according to the universityâ€™s policies and procedures.

â€œHe has a mountain of evidence against him and for nothing to happen shows thereâ€™s something wrong with the ethics of the university and the centre,â€ the volunteer said.

The date of the hearing has yet to be confirmed but should happen in the next couple of weeks. Crewe told The Daily Vox sheâ€™d been requesting a hearing for the past two months.