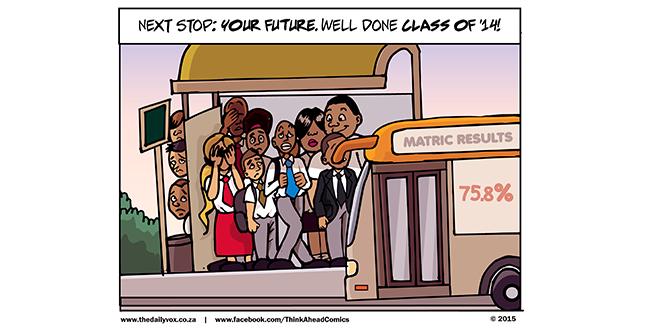 We think of the future as a faraway event. But, crucially, KHADIJA PATEL argues, itâ€™s contingent on the present â€“ and the past. As the 2014 matriculants approach their own futures, the legacies of the past will continue to inform their way forward.

futuristic – (fyoÍžoâ€²chÉ™-rÄ­sâ€²tÄ­k) adj. 1. extremely modern and unusual in appearance, as if belonging to a future time 2. Imagining what the future will be like

Both The Guardian and Buzzfeed have analysed what exactly the 1989 film, Back to the Future II, got right â€“ and wrong â€“ in its predictions of life in 2015.

And if we go by the wisdom of this film, then the reality of 2015, at least the little weâ€™ve seen of it so far, falls somewhat short of these wild imaginings.

Most notably, there is a great shortage of self-tying Nike shoes, and a dearth of robots taking the drudgery out of household chores. But beyond the automation, flight and gadgetry, the way this film portrays the year 2015 originates from a particular worldview â€“ itâ€™s born of a particular way of imagining the future, and from a particular set of thoughts. The way 2015 is perceived in the film is not a flight of fancy. The manner in which this year was represented relies on the ideologies held by its filmmakers and intended audience.

Many of us may be too young to remember the historical basis that informed the making of this film. But the sheer the reach of this film, and many others like it, means that whether we like it or not how we might imagine â€œthe futureâ€ was in some way influenced by these images on reel.

If you have managed to read to this point, you’d be glad to know that I am not high: I have a point.

On Tuesday this week, a time capsule buried in 1795 by Paul Revere and Samuel Adams in Boston was opened.

There were more than a dozen coin, and two newspapers in readable condition, among other items. And while conservationists busy themselves, working to preserve the materials and record their details, the mistake we may make is to interpret the past as a brass box buried in the sand. The mistake we may make is to think we hopped from one period to the next, from then to now, with no taint of the past, its glories or transgressions.

In reality, there is never a neat progression from past to present; one period does not exist in isolation to the next. The past exists to shape the world we live in, the people we are now.

And just as one capsule was opened this week, another version of a historical moment in South Africa was also released this week: the matric exam results.

Thousands of young South Africans this week arrived at the front doors of their own future. The release of the matric exam results mark the beginning of a new life for these young people.

They will find, as many of us have had to learn, the future is never quite what you imagine. The future is a lot better than we could imagine. Itâ€™s also a lot worse.

But, crucially, itâ€™s contingent on the present, on what these 2014 matriculants do now, how they enter those doors, if at all. Itâ€™s also dependent on the past â€“ and not just their own.

The future they approach depends on the muddied histories into which they are born, the circumstances which they must overcome, or the accidents of birth that will propel them forward just because of who their parents happen to be, or where they happen to live.

But the greatest deception these young people may be led into, is the belief that hard work alone will guarantee the future they envision. Because hard work is not enough when past and present continue to sully even the remotest possibility of a future, with its legacies of injustice, inequality, and imperialism.

The present reality many of them live in is already testimony to that. The past is never really past.

Welcome to the future.