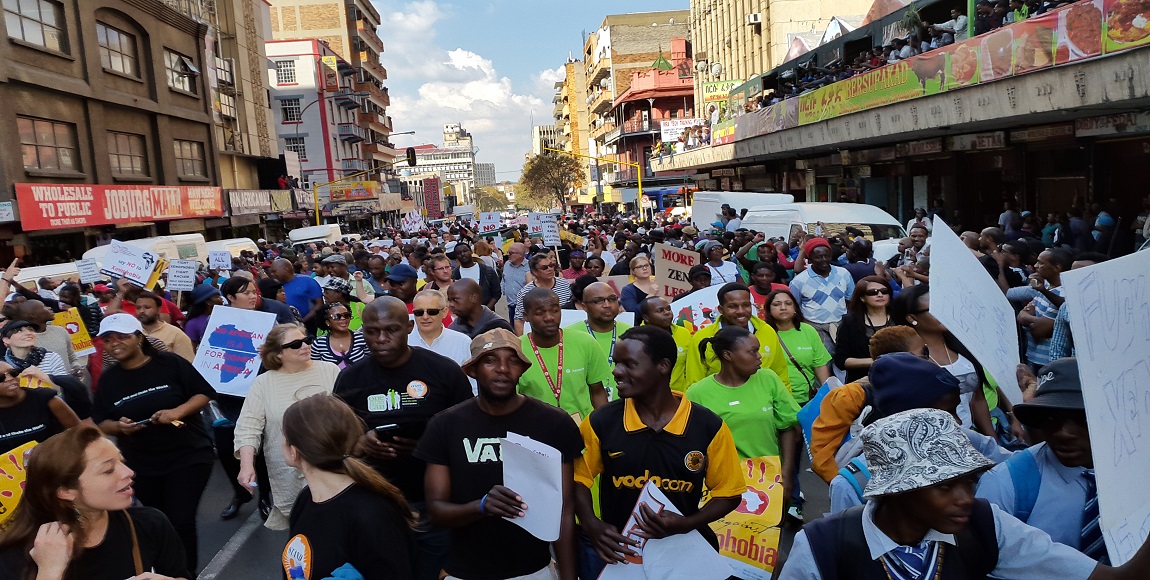 Over the past month, South Africa has experienced a recent resurgence in xenophobic violence. With the looting of shops and destruction of houses belonging to foreign nationals in Pretoria West, Atteridgeville and Rosettenville and a â€œmarch against immigrantsâ€ planned in Mamelodi it seems that our neighbours have turned into strangers once more.

This #Atteridgeville resident says he recieved a pamphlet alerting the community about a march to Home Affairs offices against foreigners. pic.twitter.com/RdEiVevyLZ

It’s clear that we never really got rid of xenophobia since those horrific attacks in 2008/2009 which led to deaths, and hundreds of foreign nationals being housed in tented refugee camps to safeguard them from township mobs.

So why are foreign nationals easy targets for local frustrations? Here are three possible reasons:

Its no secret that our economy is not performing particularly well. According to President Zumaâ€™s State of the Nation Address earlier this month, South Africaâ€™s growth rate is less than 1%. That, coupled with high unemployment, entrenched inequality and poverty does not bode well for social cohesion.

I will never understand how a foreign national owning a spaza, is EVER responsible for unemployment, service delivery, and etc #Xenophobia

â€œThere are tensions in society and in South Africa there is anger because of the economic downturn. Then there are other reasons towards social injustices. It is then unleashed on the weakest and those who are vulnerable in society.

Today it is foreigners but tomorrow it may be different.â€

But there is evidence that immigrants actually help to grow an economy. Citing research done by The African Centre for Cities, GroundUp reports that immigrants contribute quite fair amount to South Africaâ€™s economy. â€œImmigrants seem to be doing slightly better than their South African counterparts in the spaza market because of hard work or long hours put in, careful attention to sourcing of products and servicing customer needs.â€

Itâ€™s not stealing, itâ€™s competition – a key component of a free market system.

According to Saliem Fakir, writing for IOL, an incentive for hiring foreign labour is that foreign nationals make low wage demands because they are vulnerable to dismissal and the threat of expulsion from the country.

This makes the employment of foreign nationals more attractive to an employer who wants to cut costs. â€œAfrican immigrants occupy low-wage or casual positions, such as cashiers, security guards, waiters, parking meter attendants and so on,â€ said Fakier.

This is despite that fact that many African migrants are educated but cannot make a living in their home countries because of hostile political conditions or poor economic growth. â€œMany also originate from countries with economies that are highly resource-dependent and have insufficient economic diversification to capture the educated workforce,â€ Fakier also wrote.

You don’t even have the knowledge and skills, but you claim that “foreigners” are taking jobs for you. #Xenophobia

3. Are we apathetic to the plight of people who are not South African?

Deprose Muchena, regional director of Amnesty International South Africa, said international indifference to mass atrocities, from South Sudan to Syria and Yemen, had become an entrenched normality. The Daily Vox asked academics whether there was a correlation between apathy to international crises and xenophobia in South Africa.

Wits Universityâ€™s Professor Loren B. Landau, who is also the Research Chair on Mobility and the Politics of Diversity, told The Daily Vox he fails to see why South Africans would be concerned about international atrocity, â€œwhen we can accept mass poverty and inequality at our own doorstep.â€

Landau said he sees apathy to world crises â€œas a symptom towards the same processes that led to xenophobia – a willingness to ignore the disadvantaged in our own societies and the kind of alienation and anger that that breeds.â€

The Daily Vox also spoke to Dr Jean Pierre Misago, researcher with the African Centre for Migration and Society at Wits University, who said international apathy does not necessarily fuel xenophobia in South Africa â€œbecause not all migrants going to different countries originate from countries in crises.â€

Misago also said that many foreign nationals are refugees seeking asylum in South Africa from conflict or persecution.