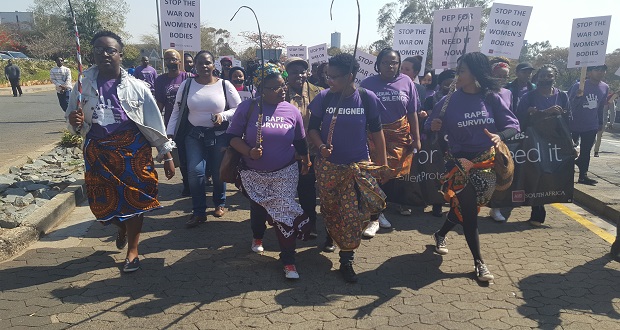 The Daily Vox team speaks to Wits Universityâ€™s Vice Chancellor, Adam Habib about the national attention around the rape allegations atÂ Wits Junction residence. He says that Wits is doing something to address the issue, but heâ€™s fed up with the â€œgrandstandingâ€ of students and activists and asks why the matter went on so long unreported.

There has been some allegations and some counter allegations on social media. I obviously cannot respond to stuff on social media, I would have to make independent investigations into that matter. Youâ€™ll see that we released a statement that Iâ€™ve asked Nomboniso Gasa, whoâ€™s a noted feminist, a noted activist, to actually review what this incident was, whether the structures of our university were appropriately abided by and are responsive to the rape complainant’s needs and concerns. Weâ€™ve also made sure that she advises us on what went wrong on our structures, because I canâ€™t get our own people to do that as that would be a conflict of interest, and we will take action in that regard.

I also spoke to the complainant and her mother, engaged them around the issues so that I understood from their perspectives what the issues are. She has agreed to an investigation on this matter. We agreed to do that immediately and I will track it from my office. Thatâ€™s what I will do.

Sheâ€™s indicated that sheâ€™s open to a deliberative conversation on this issue, but it must be done in a way that is in the interest of victims and that understands their personal circumstances. I think thatâ€™s a very mature approach. So Iâ€™ve asked Nomboniso Gasa to advise how best we could do this and to allow for a deliberative engagement that is compliant with the rule of law, that does not engage with what I call a politics of spectacle, which does tend to become a pattern of behaviour, not only in student politics recently in Wits but elsewhere. I find the politics of spectacle really unhelpful and really not very democratic. It engages with polarising rather than finding solutions to the challenge. Sheâ€™ll advise us in that regard.

Firstly, thatâ€™s what Iâ€™m really annoyed at. There is a rule that says that if there are cases, then these are brought to the attention of the executive management. In 2013, there was a big series of cases involving academic staff and we intervened very aggressively, we overhauled our structures, etc. The question that I want to know is why those policies and structures were not abided by, one of which is that the executive management in these kinds of cases is informed very timeously in this regard.

Iâ€™ve given Nomboniso Gasa 72 hours to give me a report on what went wrong so we can be very firm with timelines and that we can implement this in the way that we have.

I do find two things unhelpful. The one is, Iâ€™ve seen some statements in the social media that I find completely irresponsible, and in the mainstream media. They misrepresent the issue, they misrepresent the victim, she mentioned this, that they falsely report incorrectly about her own circumstances. I think that that is unacceptable.

Iâ€™ve seen a statement by the House Committees saying, â€œexecutive management has been protecting individuals, there is a rapist from first year,â€ to executive management now. If there is, have they laid charges both by the gender office and the police station? Because actually if they have not, then this is grandstanding of the worst kind. Itâ€™s what I call the politics of spectacle. Because if you have information and youâ€™ve not reported it to me, then I can tell you that they have not reported it to me. But you have to report it to the gender office or even the police station. If you have information that youâ€™ve not reported actually you are enabling the very rape culture that youâ€™re talking about. That kind of behaviour is what I find unacceptable.

This is why weâ€™ve put the gender office, the new processes, weâ€™ve got a review of rape culture in the residences as a study, an investigation into that, even before this incident. Iâ€™m very well aware that this needs to done, but we need to do it in a way that gets to the bottom of this problem. Have we made mistakes? I would be surprised if we didnâ€™t. Should we take action? Yes we will take action to correct this. However, we must do this in a constructive way, that resolves the issue and is sensitive to the victims themselves.

And asks why it wasnâ€™t reported sooner

This is why I am saying there is a perfect legitimate right to bring it up. I have no problem with that. The question is, you could have simply picked up the phone or written to me, I have all the time. How is it that that has not happened? Why is it that the people who – the Junction – if you knew this case, the house committee, why didnâ€™t you write to me?

Why didnâ€™t you go to the gender office and say, â€œweâ€™ve got a problem and professor Habib, this hasnâ€™t happenedâ€. Give me a single case in four years that Iâ€™m here where somebody has come to me and said that â€œthere is a rape case there and our structures are not operating appropriately. That the residence management has not behaved in this manner and you have not tackled itâ€. Give me a single case, that that has happened where we havenâ€™t acted.

My question is not that they have a legitimacy to raise it, and not that we need to discuss this. They are absolutely right on both those issues and I will make sure we will get down to the bottom of this case and I will make sure that if people have failed, that we will correct those failures. But what I also want is not a grandstanding. A willingness to engage. A willingness to participate.

Explain to me how do you enable addressing a culture of rape. Where you claim you know people whoâ€™ve been raping and youâ€™ve not charged anybody, youâ€™ve not brought it to anybodyâ€™s attention. How is that legitimate? Forget at Wits, in any society, in any context, in any progressive politics anywhere in the world. How is that possible?

Iâ€™m told that thereâ€™s a woman that was attending a meeting the other day, who walked around with a sjambok. Thatâ€™s just unacceptable, itâ€™s illegal on Wits, and actually we have given an instruction that she shall be disarmed and if she does it again we will take action. This is an institution with rules and you will abide by those rules. Those rules are there for everybody and nobody must think that they are beyond the rules.

That kind of thing has to be addressed. That somebody believes that they can walk around with a weapon and think that thatâ€™s legitimate in any context, in any society, where would that be acceptable?