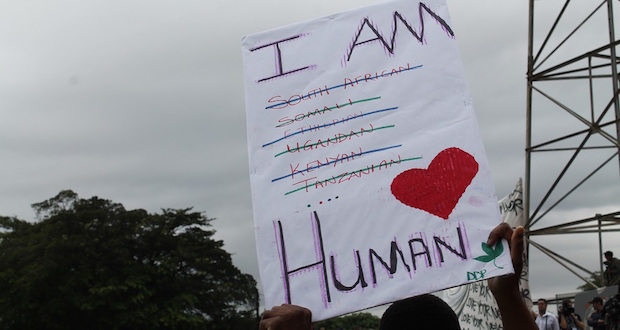 Violence against foreign nationals has once more unfurled itself on South African front pages. Make no mistake; much of South Africa is outraged. We are after all, a morally decent people. At least, we hope so. But in the outpouring of condemnation and the expressions of shame, there is also an undercurrent of bigotry, even racism, at play writes KHADIJA PATEL.

So letâ€™s be clear: xenophobia is not just something other people do. This deep-rooted, irrational hatred towards foreigners, as the dictionary defines it, permeates South African society.

The survey also found xenophobic attitudes to be stronger among white people than black people, and stronger among the poor, working class and wealthy than the middle class.

The violence of 2008 showed us how dangerous these convictions are when left to fester, but the hatred is more prevalent than we admit. Perhaps what we need to acknowledge, more than anything else, is that this hatred of the foreigner is simply more combustible in certain spaces for various reasons.

For instance, in the relatively middle-class suburb of Mayfair, in Johannesburg, which is home to an eclectic mix of foreigners from across the African content and beyond, xenophobia exists. Here the complaint is about â€œthese Somalis taking overâ€. Even in the upmarket suburb of Houghton where an address is like a status symbol, xenophobia exists. Here foreigners are regarded as the number one suspect when anything goes wrong.

But what about those who persecute and mistreat foreigns on their farms, in their hotels, or in mines and homes across the country? Is this not a form of exploitation â€“ or indeed, xenophobia?

We know too well that violence against foreign nationals is not new. The fact that this particular brand of violence has not been defeated is an indictment on us all.

Unreasonable fear and hatred of a particular type of foreigner is prevalent in this country. Itâ€™s often a few lines in the back pages of regional newspapers; itâ€™s in the queues of people at the Refugee Reception Centre;Â itâ€™s there in the streets many of us never have to walk, because it is removed from our daily reality.

In January, when xenophobic violence in Soweto broke out like the chorus of a song we all know the words to, forcing migrants to leave Soweto, the government insisted it was not a special brand of hatred motivating these crimes, just a regular brand of criminality.

Whatever the government chooses to call it, incidents of violence against foreigners in South Africa have been on the increase in recent months.

In February, the South African Human Rights Council said it had â€œbeen aware of the simmering tensions between locals and foreigners for sometime from the number of complaints we have received and dealt withâ€.

And yet, even as foreigners returned to Soweto and looters returned to patronise their stores, little has been done to prevent seeing a replay of Januaryâ€™s scenes in Soweto or elsewhere.

Just three months later, weâ€™ve seen the streets of Durban contort with violence as formations of South Africans seek to rid the city of foreign nationals and weâ€™ve seen panic and confusion send thousands of foreign nationals fleeing from their homes and businesses in Johannesburg. Weâ€™ve watched a Mozambican national stabbed to death. Itâ€™s all a slow-motion replay of an ugliness we would sooner wish away.

We need, however, to break away from the chorus of condemnation that assumes it is only a mad fringe among us that is culpable of violence against another people. We need to remember that a great many people in this country are jobless, and that this too is also kind of violence. The fact that a great many people in this country live on a pittance is a another kind of violence, a violence we exert over each other. It is a violence that has become so normal we fail to see it as a destructive force. And then when this violence escalates into another kind of violence we are shocked by its intensity, confused about what it all must means.

There is a structural violence that plays out every day in South Africa that is unacknowledged. But it is also not unique to South Africa.

A group of anti-government protesters in Kinshasa, the capital of the Democratic Republic of the Congo, attacked and looted about 50 Chinese-owned shops in January. According to one media report, some stores displayed a sign reading â€œYa bino mokoâ€ â€“ “It belongs to you, tooâ€ â€“ in a bid to discourage the rioting demonstrators who shattered windows, broke down doors and picked shelves clean in shops owned by Chinese nationals.

Just three months later, and hundreds of Congolese nationals are victims of similar violence in Durban.

Let us be clear. There is nothing, absolutely nothing, that can condone, or explain away, the murder and persecution of foreign nationals in South Africa, or elsewhere. It is wrong. It is evil. And we should be fighting against it. But itâ€™s not just some other peopleâ€™s problem. It is our problem. Now letâ€™s fix it.