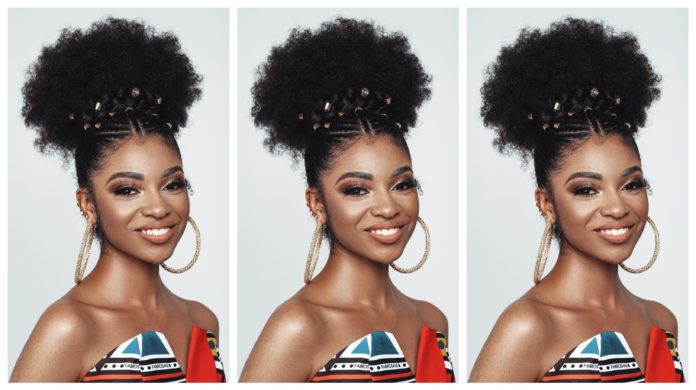 Zulaikha Patel was just 13-years-old when images of her protesting against her school’s racist hair policies became news. That protest inspired a wider protest against racism in South African schools. Now 18, Patel is making waves once again, this time as a published author.

Read more: Zulaikha Patel: How We All Wish We Were You

Inspired by Mama, Gogo, and the African queen, seven-year old Lisakhanya is proud of her natural hair that grows up towards the sun like a summer sunflower. She calls it her COILY, CROWNY HAIR. “The book is centred around affirming and celebrating the beauty of natural afro hair and celebrating and preserving Pan African heritage,” said Patel.

Zulaikha Patel speaks to The Daily Vox about her journey since the 2016 anti-racism protests, her first book ‘My Coily Crowny Hair’ and the journey of creating it.

“I matriculated last year, I was part of class 2020. The duration of my high school career was quite difficult to navigate given that the educators which were supposed to face some form of disciplinary action weren’t necessarily found fully guilty of the allegations, which was one of the unfair circumstances we as the learners found ourselves in. We were told that they could not be found guilty as we didn’t have necessary evidence. It was very puzzling as many of the cases we reported took place in corner offices where they’d deliberately be no witnesses. My high school career got very difficult, however I still managed to stick through it and do what I initially got to the institution to do, which was to get matric.”

“My activism has grown since then, going deeper into anti-racism work, as well as women’s rights work and also social justice work. Since then, I’ve come on board with the Charlotte Mannya Maxeke Institute as an ambassador. 2021 marks the official 150th year of coronation of Charlotte Maxeke and so that’s where my focus is currently.”

“I started writing this book when I was in Grade 11. I never stopped advocating since 2016 because I realised that this was bigger than just girls high, it was about fighting a larger oppressive system which has existed for centuries. In that moment I realised that we still have a long way to go and that freedom is not a destination but a constant path. I never stopped and I continued advocating against social injustice, racism, sexism, and gender based violence. I’ve also grown my anti-racism work into focusing on work centred around decolonisation.”

“I was also inspired by wanting to introduce a character I would have loved to have been introduced to as a child. So I was also driven by a responsibility to ensure that the mountain which I stand on currently which has been built by the matriarchs, and women who have come before me is higher for the generation of young Black girls and young African girls that are yet to follow and yet to arrive so that they see a vision much clearer and a vision further than what I see, and so that responsibility was also one of the driving forces of why I went to write the book.

“Once I was done writing the book and the book was compiled, I was asked by my publisher if I wanted a foreword. I agreed. I knew I wanted it to be someone young, Black and female. So I can remember sitting in the office with my publisher literally saying I can’t think of another name but Nomzamo Mbatha. I came to know of her when I was 11 just going onto 12. She made her break to South African television through the telenovela, IsiBaya and that’s when I came to know of her.

I admired her immediately because of the way she spoke and the way she articulated herself and what she spoke for and what she stood for and at the time I was pretty much just a very shy, quiet kid and I really looked up to her at the time because she portrayed the type of person I wanted to become once I broke out of my shell of by shy, which I have obviously but I definitely wanted her to deliver my foreword because of the link to my childhood and so I couldn’t think of anyone else and everytime she just kept breaking a ceiling and going further and further. My admiration for her just grew even more, so I then went on to ask her over DM and I was in awe. She responded to me and agreed to deliver the foreword, and I was in absolute awe.”

“I’m set to begin writing my second and then there is a manuscript which I have been contextualising which is another children’s book and then a memoir will follow.”

The book is currently available for pre-order and will be available in all CNA stores from the second week of May.