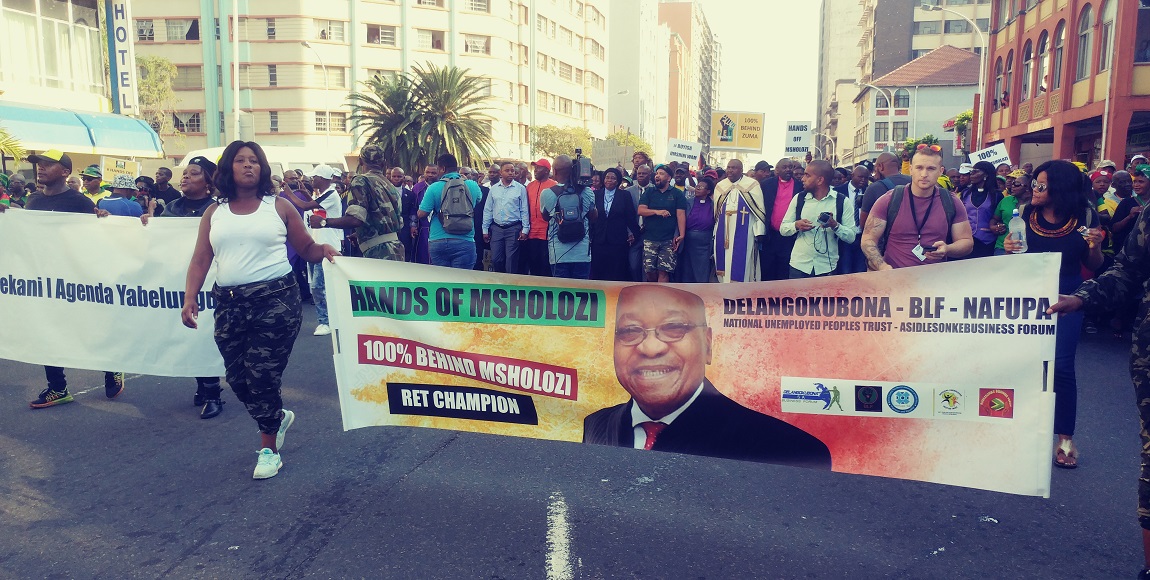 Thousands marched to the Durban High Court on Friday, 6 April in support of the former president Jacob Zuma. At the court, where he made his first court appearance for the long-awaited corruption trial, The Daily Vox spoke to a few of his supporters to find out why they were there.

Zuma is like Jesus to us and we’ve heard of the 16 charges against him but people are now talking of 783 charges. But we know that he will win this one. I am here in support of Zuma, and those who say he is guilty of corruption are those who are misinformed and only rely on everything they hear from the media. Zuma will be vindicated in the court because of the plot against black people. This is no longer just about Zuma but it’s a plot against the whole black community. The black people who believe that Zuma must be charged will wake up one day and realise that the enemy is white monopoly capital and not Zuma. What is happening to Zuma is what happened to Mam’ Winnie Mandela on the eve of her death – she’s been crucified for standing up for her people.

Today we are here because of how as black people we are struggling. We are struggling in terms of education and other things, and Zuma is the only one who stood up and tried to rectify the injustices of the past. He introduced free quality education and in the education sector, he has opened opportunities for black children. While he was still a president he was trying by all means to liberate black people but had no one to back him up. They are vilifying him because he believes in radical economic transformation but those against him don’t want it. They are the agents of white supremacy.

I am here to rally behind President Zuma and show him my support for the great role he has played in the country and his enormous contribution in the struggle. I support him for the mere fact that he knows and recognises another black person, hence he is not the kind of person you’d want to throw into the wolves. The fact that the number of charges against him keep on changing means that he is not guilty but all these charges are made up. He spoke of radical economic transformation which is something that white people are against. That’s why today he finds himself before the court. Black people who say that Zuma is corrupt and should be charged have been captured.

On the day before the former president’s appearance, his backers gathered at the Albert Park in Durban for a night vigil. Among those at the vigil was the Black First Land First (BLF) leader Andile Mngxitama and uMkhonto we Sizwe Military Veterans Association (MKMVA) spokesperson Carl Niehaus.

I am fully behind Zuma because the charges against him do not exist, it’s all just false information. He is trying to bring back what rightfully belongs to the black people but the likes of Bheki Cele are against that. Rupert and his allies are making a plot so that Zuma will land in hot water but we know the truth. Now that Zuma has started the talks of radical economic transformation and expropriation of land, we want back what is ours. We want back the land and not just in South Africa but the whole of African continent. We are tired and whoever has to die will die.

As ANC members, we are here to fulfil our promise and support President Zuma. We want it to be clear that we don’t only stand with our people when they are in positions but even when the hard times come, we still stand behind them and support them. We are here to say “hands off Zuma” to those who are saying he is guilty. We don’t know what his charge is because in 2007 we were there in Pietermaritzburg where he was cleared off all the charges. Now all of a sudden the charges have been reinstated – why is that? We are not here to fight with anyone or point fingers but we are here to say to Zuma, we are behind him. Whatever the court decides, we will welcome it.