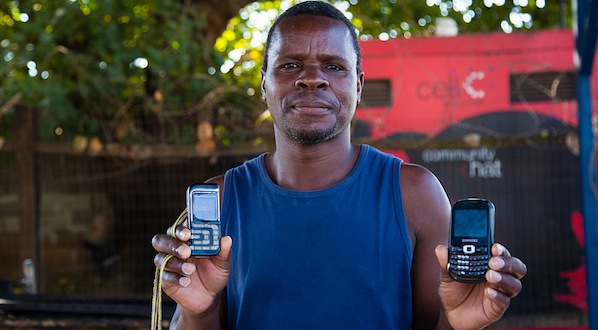 Mobile use in Africa is expected to increase 20-fold in the next five years. Despite unreliable electricity and a lack of physical connectivity, Africans both urban and rural have embraced mobile technology, making it fertile ground for the expansion of the telecoms industry. Here are 10 reasons why mobile rocks in Africa.”

1. Early Adopters
Fixed line penetration is historicallyÂ low in Africa and the continent has leapt straight to mobile instead. The African mobile landscape has grown rapidly as a result of heavy investment and the liberisation of telco markets in the late 90â€™s and early 2000â€™s. In turnÂ mobile telephony has become the pervasive mode of communication, for both voice and data, on the continent.

2. Competitive landscape
Open and untapped mobile markets have attracted massive investment from both indigenous and multinational conglomerates, andÂ this has led to more value for consumers. Despite relatively high energy costs in Africa, mobile data and voice rates compare well withÂ the rest of the world.

3. Liberalisation and regulation
Unlocking and unbundling airwaves, and governments divesting from public owned telephony companies, has created room for the mobile market to solve its own problems. Governments focused more on regulation and policy rather than operating telcos themselves, and incentivised the investment of capital in the markets. This has led to the emergence of African multinational telcos, the likes of Global Telecom (formerly Orascom Telecom), MTN, Econet and Celtel.

4. Policy
Getting policymaking right â€“ whether byÂ incentivising capital investment and technology transfer or by keeping taxes on the sector low – has goneÂ a long way to encourage growth in the telecoms sector. Most African governments avoided or minimised taxesÂ on the sector until the market matured. 5. Nurturing innovation
Regulation and over-regulation can be counter-productive to innovation. Running controlled experiments on nascent industries and modes of services haveÂ allowed mobile companies to disrupt markets and improve efficiencies. The inovative mobile money transfer company M-PESAÂ for example, hasÂ thrived in Kenya and become a model that is mirrored in other parts of the world today.

6. Localisation and consumer loyalty
Telco operators in AfricaÂ haveÂ heavily localised their products and service offerings and consumers have been loyal to providers who have gone the extra mileÂ toâ€œact localâ€. Often corporate branding rules concerning everything from marketing colours to colloquialismsÂ have been bent to mirror local tastes.

8. Micro-economies and the bottom of the pyramid
Many AfricansÂ live below the poverty line, so going â€œmass marketâ€ in Africa means serving the underserved. Africa takes miniaturisation and micro-packaging to a whole new level. Credit for air-time is available in denominations low enough for just a couple of minutes of talk time or a few SMSes.

9. Complementary services
In Africa, voice and data are commonly packaged with a range of services including everything from premium content to banking and financial services. The phone in Africa is more than just a phone; it is a way of life and a lifestyle symbol. Apps and app stores havenâ€™t really taken off yet but operator bundled services make a ridiculous amount of money.

10. SimplicityÂ and utility
Technology especially in the developed world is often shrouded in complexity and sophistication. In Africa the reverse is often true. The best performing products and services in African telco markets are typically simple services served over SMS or rudimentary mobile apps. Utility plays a big role in service adoption in Africa as can be seen in mobile money and messaging service trends. Soud Hyder is a technologist with a keen interest in mobile and media. He is the platforms lead of AJ+, Â Al Jazeera Media Network’s latest digital offering.