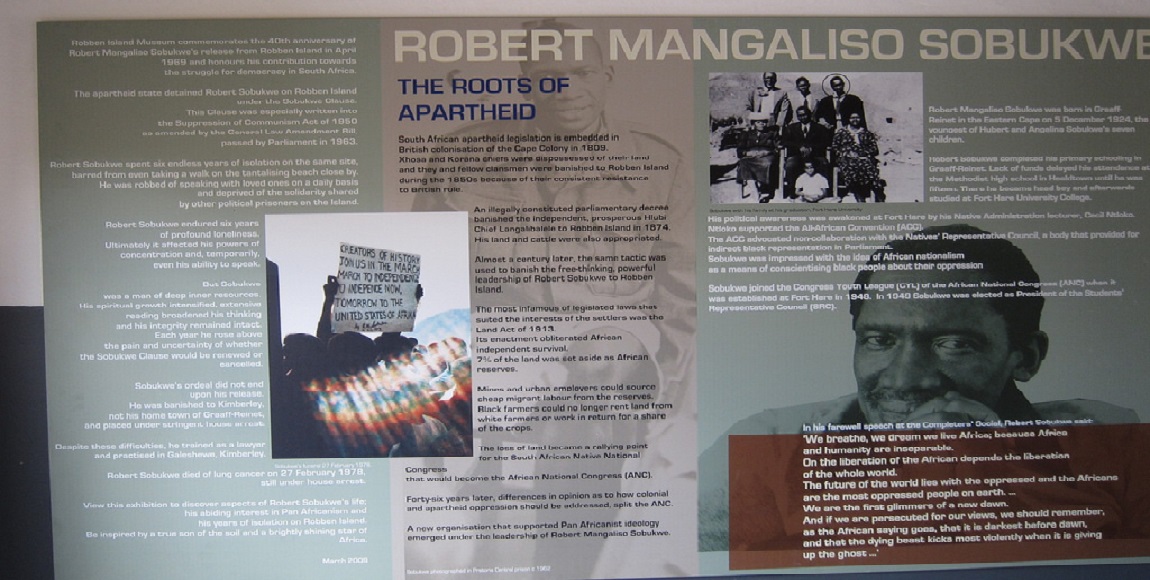 On the man behind the enigma

Robert Sobukwe was born in Graaff-Reinet on 5 December 1924. His childhood friends described him as a humble, respectful, quiet but not shy person with strict discipline. As a youth, Sobukwe supplemented his income by chopping and cutting firewood to sell. He was also described as a good tennis and rugby player. Sobukwe was a religious person, a devoted lay-preacher in the Methodist Church. He was eventually banned from praying in public for fear that he would conscientise Black people about struggle.

Sobukwe always had a keen interest in literature and focused on poetry and drama at university. He was also a writer. In 1957, Sobukwe became editor of The Africanist. Along with three of his friends, in 1958, Sobukwe launched a daily publication called Beware. His honours dissertation at Wits was entitled “A collection of Xhosa Riddles”. Sobukwe married Veronica Mathe in 1950 and the couple had four children.

#Fact19: Most of his boyhood friends described #Sobukwe as humble,respectful,quiet but not shy with strict discipline. #90SobukweFacts

After school, Sobukwe was awarded a bursary by the department of education and a loan from the Bantu Welfare Trust, which enabled him to enrol at Fort Hare University in 1947. Sobukwe studied a BA majoring in English, Xhosa, and native administration. Upon graduating in 1950, Sobukwe was appointed as a teacher in Standerton in what was known as the Transvaal. Sobukwe moved to Johannesburg in 1954 where he was appointed as a lecturer in African Studies at Wits University. He was nicknamed â€˜the Profâ€™ because of his intellectual excellence and powers of speech and persuasion. Sobukwe achieved his honours at Wits in 1958.

Sobukwe helped the Archbishop Emeritus Desmond Tutu pass his Zulu majors in his studies for a BA through the University of South Africa in 1955. While he was imprisoned, Sobukwe studied for his honours degree in Economics through London University. When Sobukwe was eventually released from prison in 1969, he was placed under house arrest where he lived in Kimberley. Here, he studied law, completed his articles, and established his own law firm in 1975.

Sobukwe came into politics while at Fort Hare. Sobukwe was elected president of the Fort Hare Students’ Representative Council (SRC) in 1949, where he proved himself to be an effective orator. His legendary speech as outgoing president of the SRC in October 1949 established him as a prominent figure among his peers. He accepted a nomination to become the national secretary of the African National Congress (ANC) Youth League. During his tenure, he was influenced by the writings of Anton Lembede and adopted an Africanist position within the ANC. Sobukwe, along with other Africanists in the ANC, broke away from the party in 1958 and formed the PAC a year later. Sobukwe was the founding president.

Sobukwe believed the future of South Africa should be in the hands of black Africans and that they must be owners of the means of production. He said: “In 1955 the Kliptown Charter was adopted, which according to us, is irreconcilable conflict with the 1949 Programme seeing that it claims land no longer Africa, but is auctioned for sale to all who live in this country. We have come to the parting of the ways and we are here and now giving notice that we are disassociating ourselves from the ANC as it is constituted at present in the Transvaal.”

Fact71:He believed that a leader must have total commitment to the struggle of the African people for national emancipation. #90SobukweFacts

An advocate of an Africanist future for South Africa, Sobukwe rejected any models of liberation that suggested working with anyone other than Africans. He defined African as anyone who lives in Africa, pays allegiance to Africa, and who is prepared to subject themself to African majority rule. His conviction and activism inspired many, including the Black Consciousness Movement.

Fact21:#Biko said when he walked in2 a room & saw #Sobukwe,”No Thix’u lapha?” “Wow, even God is here?”Thats how much #Biko respected Sobukwe

He was sceptical of the multi-racial path the ANC was following. Sobukwe argued that white people should be excluded from the ANC because it was impossible for the two groups to have a relationship until further progress had been made. He said relying on white people would disempower Africans who had realised that they had the power to reclaim a society that had been taken from them. The PAC excluded white men. It aimed to rid black African people of the servant mentality by identifying with other African nationalist movements and through “self-identification”. Knowing that other African groups were trying to achieve the same things gave the Africanists a sense of power and unification.

Fact70:#Sobukwe also advocated for the creation of a United States of #Africa .#90SobukweFacts

On the silencing of Sobukwe

The message of the PAC culminated with the 1960 protest on the pass laws and the Sharpeville police massacre. This was the beginning of torturous treatment for the activist. Sobukwe was sentenced to three years in prison for inciting Africans to demand the repeal of the pass laws and at the end of his sentence, parliament enacted a General Law Amendment Act. The Act included the ‘Sobukwe Clause’, and allowed the minister of justice to detain any political prisoner indefinitely.

Fact65:#Sobukwe is the only leader in SA liberation history to be imprisoned on Robben Island without even a mock trial.#90SobukweFcats

Sobukwe was moved to Robben Island, where he remained in solitary confinement for another six years. The Sobukwe Clause was renewed every year and was never used to detain anyone else. When he was eventually released from prison in 1969, he was placed under strict house arrest and had to apply to leave town for family gatherings. Sobukwe was denied permission to leave the country and take up employment outside the country when he was offered jobs or if he applied for work. He was subjected to this special treatment, it is speculated, because the apartheid government had deemed him more radical and more difficult an opponent than the regular political prisoners.

#Fact14 Apartheid Gvt fed #Sobukwe pieces of broken glass in his food and poisoned him in secret. #90SobukweFacts

Sobukwe died on 27 February 1978 from lung complications at Kimberley General Hospital. Even after his death in apartheid SA, Sobukwe’s voice could not be quoted and his voice be heard.

On this day we remember Sobukwe, long may his spirit live.

The special series on Robert Sobukwe is published in partnership with the ASRI.