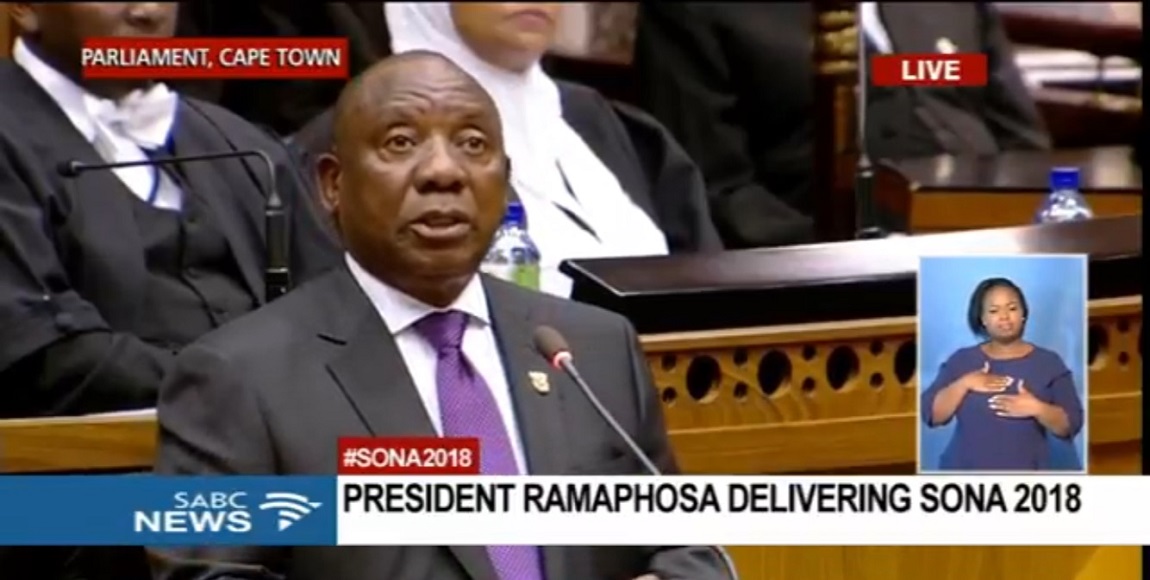 South Africa’s fifth democratically elected president Cyril Ramaphosa had his inaugural State of the Nation Address on Friday night at the Parliament in Cape Town. The nation (at least those who hadn’t opted for the Black Panther premiere instead) was glued to the television screens to witness what Ramaphosa would say and how he would distance himself from the turbulence that was the Jacob Zuma administration. For the first time in three years, the SONA also started without any interruptions. The Daily Vox team rounded up the biggest things from the 2018 SONA.

The new president managed to immediately diffuse any tension in the chamber by starting off his speech with a joke for Economic Freedom Fighters’ leader, Julius Malema, eliciting a laugh from Juju.

Ramaphosa began his speech invoking the memory of the first democratic president of the Republic of South Africa Nelson Mandela, saying that we are continuing the long walk he began, to build a society in which all may be free and equal. Importantly, Ramaphosa said we are building a country where a person’s prospects are determined by their own initiative and hard work, and not by the colour of their skin, place of birth, gender, language or income of their parents. He also repeated that bit, interestingly enough, in Afrikaans.

The Ramaphosa presidency really began at the World Economic Forum in January, where he assured global investors that South Africa was open for business. He continued the theme in his speech on Friday, where he mentioned that business confidence in SA has increased and investors are looking for new opportunities. SA also been identified as an emerging market to watch for 2018 by financial institutions. (It was Goldman Sachs. Shudder.)  Ramaphosa said: “Our task, as South Africans, is to seize this moment of hope and renewal, and to work together to ensure that it makes a meaningful difference in the lives of our people.”

State capture is over

Ramaphosa seems determined to distance himself from the Jacob Zuma era of corrupt governance and state capture. He said the government are dedicated to building a society that is defined by decency and integrity and which does not tolerate the plunder of public resources. He also said governance in ministries and agencies like the National Prosecuting Authority and the South African Revenue Service would be reviewed soon. He said: “This is the year in which we will turn the tide of corruption in our public institutions.”

The youth made up a big part of this year’s speech with Ramaphosa emphasising the need to address youth unemployment, which he deemed one of the most grave challenges facing the country. He said the government would be working to create jobs for young people in the country with a Jobs Summit scheduled for later this year. Ramaphosa said that young people needed to drawn into the economy. His proposals were drawn straight out of the Democratic Alliance playbook, though.

Reaffirming the decision made during the 54th national conference of the African National Congress, Ramaphosa said the government would accelerate the land redistribution programme, and mentioned the dreaded “expropriation without compensation” policy. He said the programme should be implemented in a way that increases agricultural production and improves food security and ensures land is returned to those it was taken away from during apartheid and colonialism

Ramaphosa said Zuma’s free education plan would still be implemented, though he left the details to whichever person may deliver the budget speech next week Wednesday. In December Jacob Zuma announced that the government would be introducing free higher education and training for poor and working class South Africans. The President said the details of the financing would be clarified during the Budget speech while the Minister of Higher Education would be in charge of the implementation.

You can watch the full speech here.

So did you watch this year’s SONA? Has Ramaphosa convinced you that a new day is coming for South Africa? Comment below or tweet us.