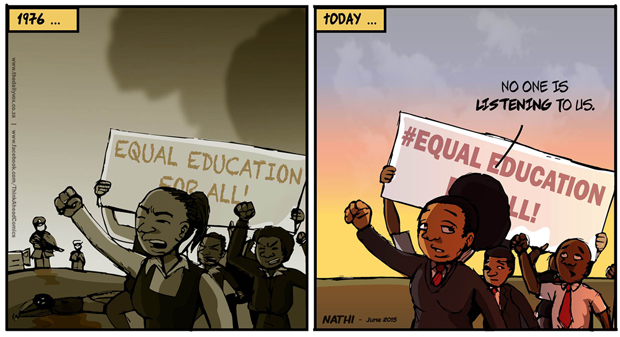 The class of 1976 have inspired many uprisings and protests from what many people have termed “born frees”. These youngsters have challenged our democracy and have exposed the flaws in our education system, institutional racism, systemic white privilege in the various institutions, and demanded decolonised education and access for all; including workers and students. This we’ve seen from #RhodesMustFall protests at UCT, #RhodesSoWhite and #RUREFERENCELIST at UCKAR, as well as #FeesMustFall and #EndOutSourcing protests across the country. However, youth uprising throughout the past few years did not end at universities. The students at Phillippi High School have since March 2017 marched to Parliament to voice the conditions at their school and the shortage of teachers. Students at Pretoria Girls High protested at a former whites-only school against the school’s hair policy, which highlights the typical exclusion and racism in model C schools. All these students in their different capacities have been met with police brutality, the government failed to meet their demands, and have been dealt with in the form of exclusion at their schools, writes SIYAMTHANDA NYULU.

June 16 has been reduced by the government, opposition parties, and the private sector to mere rallies, bashes, visits and donations to impoverished youth and seminars across campuses. They are using this day to boost their egos, making a noise, and flaunting their money. The government should rather address and deal with the high youth unemployment which is according to Statistics South Africa 38.2%, implying more than one in every three young people in the labour force did not have a job in the first quarter of 2018.

There is nothing to celebrate because the future of the country are killed in the streets of Cape Town by gangsters. Young women are constantly being harassed, sexually assaulted, and can’t breathe because of the high femicide rate in this country. Young people are wasting their talents and futures in taverns and on drugs. What is there to celebrate when the government has turned their backs on us and sold our country to the Guptas and white monopoly capital? What is there to celebrate when young people who fought for free education are attending court cases, arrested, and are subjected to house arrest? Why should we celebrate when young people in the rural areas of the Eastern Cape are studying in mud schools and under trees?

The basic education system is in shambles. The department of education is so futile that they are considering making history a compulsory subject. The history that is taught in schools is the one that portrays Africans as people who needed the assistance of colonisers in order for the continent to develop. Black people are portrayed as individuals who had no proper way of living. If we are to go to most schools today, students would answer you if you ask them who is Jan van Riebeek but would look at you cluelessly if you ask who is Teboho Tsietsi Mashinini. Instead of making history compulsory, the department of education should consider changing the current curriculum and make books like Steve Biko’s I Write What I Like compulsory for students in grade 12. The youth of ’76 didn’t die for their children and grandchildren to be taught such a flawed history.

Frantz Fanon teaches us in the book The Wretched Of The Earth that “each generation must discover its mission, fulfil it or betray it, in relative opacity”. It would be disingenuous for me to deny that the generation of comrades Hector Peterson, Seth Mazibuko, Sibongile Mkhabela, and Paul Langa didn’t fulfil their mission. They fought for their right to education and fought for freedom. It is because of young people like them that the youth of today have political freedom and live in a democratic country. What do we “born frees” consider as Fanon says, our mission that needs to be fulfilled? I believe that we should move away from political parties that are using June 16 in vain, and should fight for economic freedom. The only way to get that economic freedom is through the land. No political party will liberate us. The ruling party certainly won’t give us the land. Let’s not betray our generational mission. Let’s fight for land expropriation and maintain economic freedom in our lifetime. Let’s use June 16 to rally the youth to occupy land and fight for it by all means necessary.