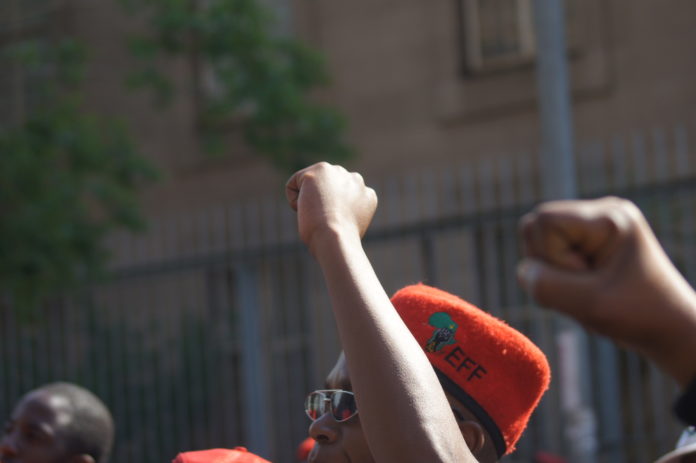 The proposal to dissolve the EFF student command is plausible and worth debating.

In an earlier discussion, the six signs of a politically decaying EFFSC branch are laid out. These are: the branch becomes synonymous with violence, rowdiness and chaotic exchanges among comrades. Secondly, the branch outsources its collective thinking capacity to campus-based trade unions and forums, handlers, basically. The third is the branch stops taking up genuine worker and student struggles, instead of focusing on internal factions and squabbles. The fourth is branch actively shuns engaged political, intellectual and ideological work, preferring empty sloganeering, phrase-mongering and related populist attitudes. The fifth is the branch bashes women, treats feminist discourse with suspicion and relegates the female members to sub-members. Lastly, the leadership core of the branch deliberately neglects its academic duties, either by way of repeatedly failing their modules or sometimes going a semester or 2 without registering all.

Although the exposition does not call for the shutting down of the student organization, it speaks to some of the issues that the EFFSC needs to grapple with thus calling for sincere introspection.

This rejoinder does not seek to argue for or against the dissolution/disbandment of the EFFSC as is remarkably done by comrade Siya Nyulu’s intervention, instead I seek to detail how the cohort of students who are insisting for the continued existence of the EFFSC are committing three unforgivable errors in framing their arguments.

First, it appears in the discussion that there’s a false idea among students that the debate is between two organisations, the EFF and the EFFSC. This false idea stems from attitudes that tend to wrongly assume that EFFSC enjoys either full or relative autonomy from the EFF. The reality is that the discussion is actually between EFF and its structures, because the truth is that EFFSC is a de facto substructure of the EFF.

This is in contrast with the South African Students Congress (SASCO) which, though aligned to the African National Congress, is a fully fledged autonomous structure with its own history independent of the ANC. In this regard, whereas ANC and SASCO can have a public engagement with each other, the EFFSC cannot realistically have an engagement with the EFF, because EFFSC is a structure of the EFF. So, members of the EFFSC are automatically members of EFF, thus they should frame their discussions from the prism of the EFF rather than on a feeble notion of an autonomous EFFSC. If this is achieved, there wouldn’t be lazily exceptionalist statements like “Defend EFFSC” or “EFFSC is under attack” (because EFF cannot attack itself, neither can the EFF defend itself from itself), instead the discussion would be correctly framed as one between EFF members on the future of the organization, inclusive of all its existing structures.

Second, many students are realistically fearful of the unknown, because most of them assume that the dissolution of the EFFSC will mean that EFF will not exist in institutions of higher learning. This fear is absurd because EFF existed in these universities and TVETs prior to the formation of the EFFSC; for example both Unisa and Wits EFF students started organising on their respective campuses as far back as late 2013, with both branches contesting SRC elections in the following year. Students further wrongly think that when there is no EFFSC branch on campus, the campus will be led by the community branch command team of the ward wherein the campus is geographically situated. This is simply untrue, because when the EFFSC is dissolved, campus-based branches will continue to exist, with their own leadership that is elected by students, but such a branch will now be under the administrative leadership of the regional command team (RCT), receiving resource support from the provincial command team (PCT) and political guidance from the Central Command Team (CCT), as was the case prior 16 June 2015.

In this vein, the call for the dissolution of the structure is not a purge of student leaders and their noteworthy activism, but is rather a call to do away with unneeded bureaucracy, thus aligning students to the broader politics of the mother-body.

Lastly, all elective conferences have the inevitable effect of making the organisation vulnerable to chancers, agent provocateurs and other infiltrators, the EFF is not immune to this. This debate has given EFF backsliders a fertile platform to engage in crude social media factionalism, deepening “Matorokisi vs Mapiano” chatter, with the intention to sow hatred and division among leaders of the EFF. This is a tendency that students need to guard against.

EFFSC President Mandla Shikwambana handled the eNCA interview brilliantly on Monday evening, when the interviewer Thembekile Mrhototo was set on asking questions that seek to peddle lies and drive a wedge between students and the EFF. He spoke with so much clarity and calmness, made his case beautifully without falling into the trap of putting the EFF into disrepute. All EFFSC students should learn a lesson or two from him, on how to articulate differences in opinion without degenerating into insults, slander and pure childishness. The conduct of president Mandla is exemplary of the good fight that the EFFSC should be waging; he and his leadership collective should refuse to go down without a fight, and must equally wage this fight whilst ensuring that they decisively disassociate themselves from expelled members (and other thuggish, ill-disciplined and incorrigible elements) who are hell-bent on using the discussion on the possible dissolution of EFFSC to surreptitiously immerse themselves in EFF matters. Comrades of the EFFSC should defend the EFF more than a mere structure, defend the EFF from enemy agents.

Ntando Sindane is a founding member of both EFF/EFFSC. He is also an emerging researcher and academic at Unisa’s department of mercantile law. He writes in his ideological capacity.