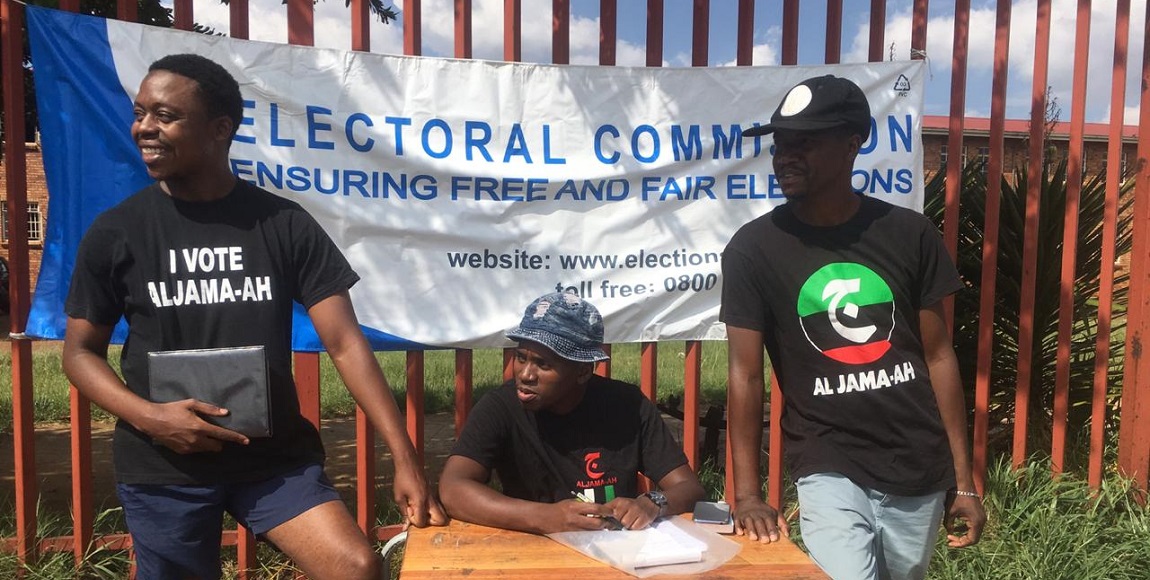 Known in South Africa as the Islamic party, the Al Jama-ah Political Party is contesting in national elections for the second time this year. Established in 2007 by its party leader Ganief Hendricks, Al Jama-ah’s purpose is for Muslims to “play a sincere and positive role, contributing to the transformation of post-apartheid South Africa, for the benefit of all South Africans.”

The biggest obstacle to transforming post-apartheid South Africa is inequality. The ruling party’s key failure is its inability to close the gap between the rich and the poor, Al Jama-ah councillor Abubakr Thapelo Amad said in an interview with The Daily Vox.

“Between the elite and the downtrodden, the poor there isn’t a middle class, there is a huge gap. In the 25 years of democracy, the government should have done more to create the middle class through employment, through unlocking economic opportunity,” Amad said.

Al Jama-ah, he said, is the political organisation to foster socio-economic inclusion.

Tackling inequality with Ubuntu and Islam

“We are an inclusive political organisation which is founded on the basic fundamentals of Islam and Ubuntu,” Amad said. Although one is faith-based and the other values-based, the two go hand in hand.

“Ubuntu is where people share from the little that we have so that the gap shouldn’t be that huge,” Amad said. From an Islamic perspective, sharing is also important.

Amad uses the example of the way Ansaar (Muslims living in Madina, Saudi Arabia) shared the wealth they had with the Muhajireen (immigrant Muslims who fled Makkah to Madina because of religious persecution). This example illustrates both the importance of sharing and the welcoming immigrants.

Xenophobia in South Africa shows a disconnect with ubuntu

But you don’t have to be Muslim to vote for the party, you just have to believe in the Islamic principles.

Al Jama-ah is not a Muslim-only party

“It’s an identity political party,” Amad said. “Anyone who believes in Al Jama-ah can vote for Al Jama-ah.”

The party does, however, advocate for Shariah law. “There are certain disciplines of Shariah that can be adapted for this country to move forward,” Amad said. However, support for Shariah aside, the party is first guided by the South African constitution.

Voting for Al Jama-ah doesn’t necessarily mean endorsing Muslims only to take up political positions, Amad explains. The party is open to qualifying anyone participating in political decision-making provided that they are members of the party.

The party itself is “fairly big”, because as Amad said it has done the work of building its constituency. Currently, Al Jama-ah has nine local ward councillors in various municipalities: six in KwaZulu Natal, one in Gauteng and two in the Western Cape.

Muslims are only 1.9% of the population according to a 2015 Statistics South Africa census [PDF]. Considering its modest size and that its voters base is mainly Muslim, the party is not aiming to take up office in government.

Instead, Al Jama-ah is aiming for three or four seats in Parliament so that it can actively participate in the national legislation.

“We are predominantly targeting the Gauteng province for expansion,” Amad said. Al Jam-ah sees the coalition government governing the main metros in the province as “an open gap for us to participate”, he said.

Seeing that the party is not in any form of a coalition in Gauteng, Al Jama-ah is able to influence legislation. While bigger parties spar, Al Jama-ah focuses on results, Amad said. “When we throw a motion, it passes through. Whichever niche we find in a community, we take the issue, we exploit it and push it into legislation and get the maximum result,” he said.

The party is also targeting KwaZulu Natal where it has its largest supporter base.

The Daily Vox asked the party where it stands on key policy concerns like the land, the youth, and on women.

“We are in support of land expropriation,” Amad said. The party also supports the processes that must be followed “because not everyone has stolen the land,” he adds. Al Jama-ah is aware that it will not be national government but will support all motions to expropriate the land provided that the government follow due processes.

“Our ruling party has neglected the youth,” Amad said, noting that the youth are the future leaders of the country.

In the Western Cape, the party has a relationship with student organisation Congress of South African Students (Cosas). Al Jama-ah aims to incubate the youth and train them so they can lead the country forward. “We found synergy between Cosas and Al Jama-ah in the Western Cape because they believe that we can bring the change in this country,” Amad said.

Al Jama-ah also supports free education. “We have a model to support free education,” he said. If the varsities are unable to increase intake, the party proposes distance learning through Skype or YouTube. “We live in a digital world, we don’t have to wait for the much-needed physical financial resources,” he adds.

The party believes in women’s leadership, Amad said. “We are trying to support women to take the councillor posts in the local government and from there they can participate in the national government,” he said. Muslim women are not usually involved in politics, and the party wants to support them.

Al Jama-ah is the last hope for the communities, Amad said. “We want to conscientise the people that we can never live in silos, we need each other. We can’t live among the elite and forget the poor, or live among the poor and be excluded from the economy,” he said.

If new voters are voting for us we will tackle inequality and economic exclusion, Amad said.

The party will launch its manifesto on 2 February in Pietermaritzburg.

The Dagga Party: How Cannabis Can Unlock The Economy To The People

The Land Party: A “People’s Dictatorship” For South Africa