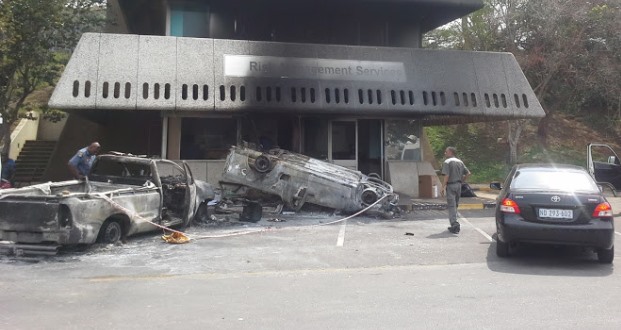 Protests at the University of Kwazulu-Natal (UKZN) have quietened on Tuesday after the university cancelled classes and police stepped up their presence.

On Monday, students barricaded roads near the UKZN campus, threw stones at police officers and petrol-bombed the administration block to protest new regulations concerning the provision of financial aid.

According to the South African Students Congress (Sasco), the requirement for funding from the National Students Financial Aid Scheme (NSFAS) is that students need to pass 50% of their modules and UKZN has unilaterally increased the requirement to 70%.

The students were also protesting the potential closureÂ of the universityâ€™s Registration Appeals Committee, which is the body responsible for negotiating terms of payment for students who cannot afford to pay registration fees upfront.

Daily Vox reporter, Lizeka Maduna was at the UKZN Westville campus on Tuesday and said that the situation was calm, although there was a strong police and security presence.

Students that The Daily Vox spoke to were largely sympathetic to the protestors.

Business Administration student, Njabulo Mthalani said that he was solely dependent on financial aid and that it would be impossible to achieve the new standard imposed by the university. “The management had already made their decision, so a protest is the only option to get the message acrossâ€.

Biochemistry student, Thabiso Zulu (19) said: “I’m against the registration fee increment, it’s unreasonable and should they not consider our demands the protest continues.â€ SascoÂ general secretary Luzuko Buku told The Daily Vox that management at the University of Kwazulu-Natal (UKZN) is trying to present students as hooligans. â€œThere are some shenanigans done by management in collaboration with the police â€¦ The university has reacted by calling more police and beefing up security,â€ he said.

On Tuesday, UKZN spokesperson Lesiba Seshoka, told The CitizenÂ that the universityâ€™s management had not been presented with a list of grievances.

In a statement released later, SeshokaÂ said the universityÂ remains committed to a process of consultation and dialogue with students. “University management is currently engaging members of the Student Representative Council (SRC) to understand the causes of the unrest and to address the student grievances,” he said.

He addedÂ that an investigation into the violence and misconduct seen on campus was underway and that those responsible would “face the full might of the Universityâ€™s disciplinary codes and where necessary, the law”.