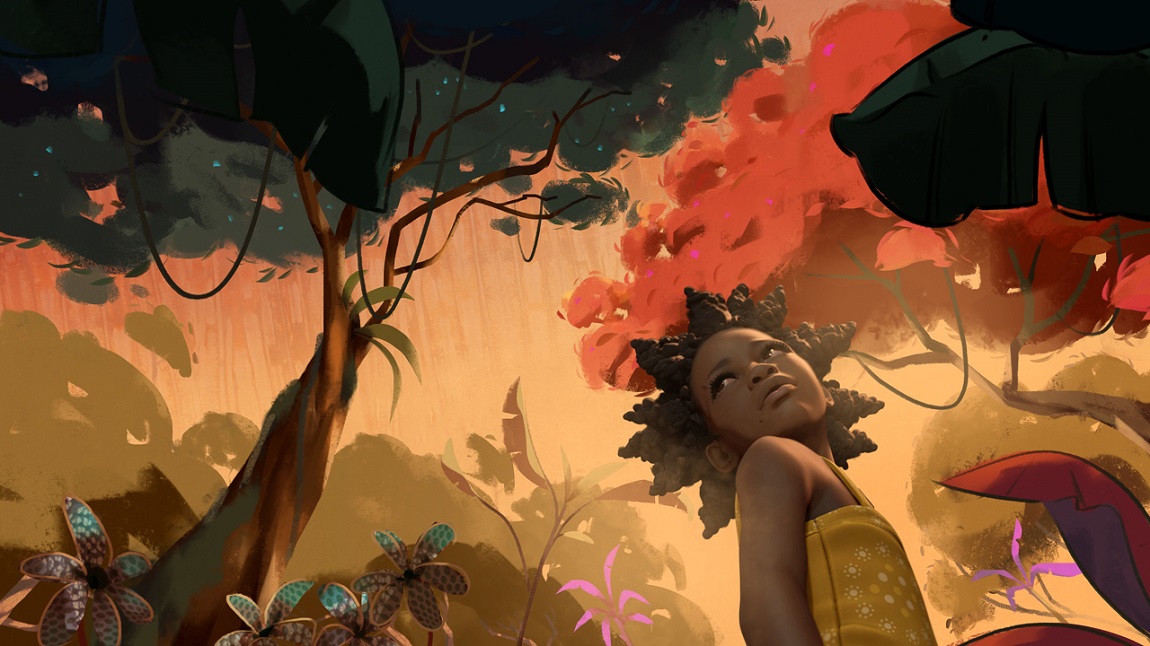 In a collision of the real and the imaginary, five Swazi children tell the story of Liyana: their very own fictional character as she journeys to rescue her young twin brothers. Guided by legendary South African storyteller Gcina Mhlophe, the children weave together their own dark experiences and their brightest hopes in the film that is part animation, part documentary. Art director/animator, Nigerian-born Shofela Coker animates the fictional hero. Liyana is creative, innovative and demonstrates both the strength of the human spirit, and the healing power storytelling. Critically acclaimed, and executive produced by award-winning actress, Thandie Newton, the film has won over 25 jury and audience awards and has been screened at more than 80 film festivals globally. We spoke to the directors of Liyana, husband and wife duo Aaron and Amanda Kopp.

Why is the story of Liyana – of orphaned children who turn their own unfortunate experiences into a story – an important one?

This story is important because is shows that each of us, no matter where we come from, have a story to tell â€“ that our voice matters. If these kids, having been through everything they have been through, can tell a beautiful story that is touching people all over the world, then the rest of us can be inspired.

Some of the themes in the film include AIDS, alcoholism, kidnapping and abuse which aren’t typical plot in the tales children invent. Why are these themes explored in the film and why do you think they’re important for children to speak of?

These darker themes are explored in the film because they are part of the lives of the storytellers. The children in the film have had a really rough start in life. So it is natural that they bring a lot of their own experience to the fictional story.

It is important for children to be able to express themselves in this way because it gives us adults a vision the world from their perspective.Â And maybe even more importantly, the storytelling itself is therapeutic. The fictional character provides a safe place to talk about things that may to too difficult otherwise. That is way all people tell stories. We want to make sense of the world and ourselves. We had no idea what stories the kids would come up with so it was exciting for us to see their ideas – and our film – taking shape in real time right in front of us.

How long did it take to film?

The storytelling workshop was three very intense weeks. But the research, post-production, editing, and animation took several years. Overall it was about 8 years that we worked on the film. We are a very small team. So yes, it took us a long time!

It’s beautiful how you wove together 2D and 3D imagery, animation and footage. Was this difficult to do? Did you have any reservations about combining the two?

Thank you. At the outset we knew combining the two mediums successfully would be a big challenge. The two worlds have to work together to create a cohesive whole. Our success here is a testament to the talent and dedication of our art director/animator, Nigerian-born Shofela Coker. He worked extraordinarily hard on every little detail to make the animation visually with the real-life footage.

The other key is sound. Music and sound design do a great deal to hold the narratives together. Our composer, South African Philip Miller, was an instrumental part of that.

How involved were the writer and animation artist in the film?

Gcina Mhlophe is the guide along this storytelling journey that the children take. She provided the children just the right balance of structure and freedom for their ideas to flourish. She is a master storyteller and she did a wonderful job of inspiring the children to be their best storytelling-selves.

Shofela has been a crucial part of this journey for us. His artwork brings the children’s story to life with passion and beauty that I am not sure we could have found anywhere else.

What did you learn making the film?

Perseverance. That is a lesson that we learned from the kids in the film. We quote their lines to one another all the time: “Don’t give up.” “Hold on to hope!”

The film won the LA Film Festival Documentary Prize, what were other reactions to it?

It has been truly humbling to have this story resonate so well with audiences around the world. We just won our 27th festival award this week. We love it! Audience of all races, ages, and nationalities respond to the children’s story. It is proof of the power in the voices and imaginations of these young people!

Why should people watch Liyana?

People should watch the film because it will be unlike any film they’ve seen before. I think viewers will be carried away into the imaginary world of these children just like we were. They’ll laugh. They’ll cry. And they might just come away wanting to tell the world stories of their own.