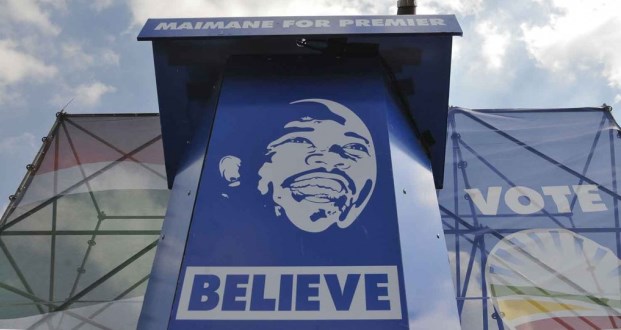 Look, politicians all say some questionable things. Julius was ready to kill for Zuma, now he’s ready to take up arms against the ANC. And then there’s Msholozi himself, who said the ANC would rule until Jesus comes. We’re asking Black Jesus to take the wheel because in the line of politicians saying questionable things, the run-up to the local elections is going to be messy.Â The other day,Â it was Mmusi Maimane whoÂ was quoted as saying, â€œPikitup are holding residents hostage. Now there are rats running all over the place. How can that be? It’s a crime against humanity.”

So forÂ Mmusi, and any others out there, Â we sourced the definition of a “crime against humanity” from the International Criminal Court. Â â€œCrimes against humanity include any of the following acts committed as part of a widespread or systematic attack directed against any civilian population, with knowledge of the attack, murder, extermination, enslavement, deportation or forcible transfer of population, imprisonment, torture rape….â€.

So, that’s quite self-explanatory but when it comes to actual experiences of a crime against humanity, we South Africans have been feelin’ it.

In 1973, the UNÂ adoptedÂ theÂ International Convention on the Suppression and Punishment of the Crime of Apartheid, which 101 states have ratified.

Apartheid is a crime against humanity, ref.Â the United Nations.

In 2002, the Rome Statute of the International Criminal CourtÂ Â also defined the crime of apartheid as inhumane acts of a character similar to other crimes against humanity “committed in the context of an institutionalised regime of systematic oppression and domination by one racial group over any other racial group or groups and committed with the intention of maintaining that regime.”

So basically the ICC shouldÂ be prosecuting apartheid tendencies. And as this writer points out, Â “Groups such as the Kurds, the Tamils, the South Sudanese, or other indigenous peoples do suffer systematic discrimination that might well meet the definition of apartheid, even if those practices lack all the legal trappings of the South African model. But the term has not been invoked by victims or their advocates, no doubt because it is still associated with South Africa.”

AndÂ when it comes to South Africa, the number of white people who recognise apartheid as a crime against humanity is, well, split.

According to the 2014 SA Reconciliation Barometer, white citizens are less likely to remember the oppressive nature of apartheid than other citizens. Only 53% of whites who took part in the survey agreed with the statement that apartheid was a crime against humanity, Â compared to 80% of black people, 77% of Indians, and 70% of coloured citizens.

The barometer, published by the Institute for Justice and Reconciliation (IJR), analysedÂ 10 years of data collected between 2003 and 2013.

Furthermore, the report found that white South Africans were half as likely as black South Africans to agree with redressing the injustice of the past. No one has really been held accountable for apartheid, despite the UN recognising it as a crime way back in the 1970s.

As the writer Frank Barat explains, the UN conventionÂ “characterises apartheid as a crime for which individuals can be held accountable. The convention defines apartheid as a series of ‘inhuman acts committed for the purpose of establishing and maintaining domination by one racial group of persons over any other racial group of persons and systematically oppressing them’.”

And as our fave, TO Molefe recently spelled out with characteristic brilliance, “The TRC was not the reckoning for apartheid it presented itself to be.”

When your white bestie asks what they should do and you say, “Give up your job, property and go work as gardener.” pic.twitter.com/UMEHzZK0fj

“So the truth about apartheid â€” that it also, in addition to the gross human rights violations, harmed every single black person economically and cognitively for the benefit of every white person, and that was a moral stain that sullied their humanity â€” lingered in the shadows of the TRCâ€™s processes but did not take centre stage as the TRCâ€™s reason for being,” Molefe writes.

So y’all should go read what TO says there.

Back to our original point, though, itâ€™s not niceÂ to be surrounded by trash. But all the Pikitup workers wanted was to earn a minimum wage. YouÂ would think them not being able to live above the line of poverty would be closer to a crime against humanity than not collecting our rubbish.