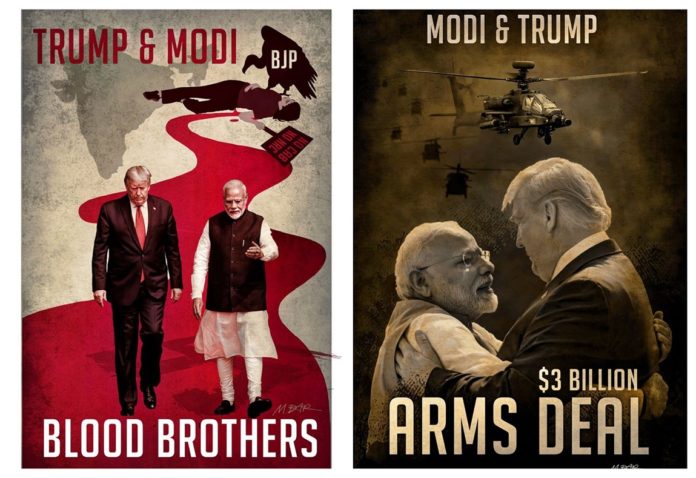 Mukhtar Dar is an artist, creative producer, and filmmaker based in Birmingham, Britain. He has created a few powerful images of the meeting of American president Donald Trump and Indian prime minister Narendra Modi this past week in India. Trump’s trip to India marked his first state visit to the country. While Modi laid out the red carpet for Trump, protests and violent attacks took place in the capital Delhi.

On Sunday, protests begin in Delhi against the citizenship law. Last year the Indian parliament passed the Citizen Amendment Act (CAA). This act would essentially give Indian citizenship to illegal migrants of Hindu, Sikh, Buddhist, Jain, Parsi, and Christian religious minorities, who had fled persecution from Pakistan, Bangladesh, and Afghanistan before December 2014. Muslim migrants from those countries were not included in the law.

Soon after the act was passed, it caused mass protests in Assam, Delhi, Meghalaya, Arunachal Pradesh, and Tripura. Associated with the CAA was the National Register of Citizens (NRC). This was a register for all the citizens of India in order to reportedly deport illegal migrants. Protests have been taking place since December. There was a violent pushback by the police towards protesters especially students at the Jawaharlal Nehru University, Jamia Millia University and Aligarh Muslim University. Parts of the internet were shut down in Delhi.

The latest violence in Delhi was reportedly triggered when a week-long peaceful sit ins in New Delhi was attacked by Hindu-nationalists. Many parts of the capital saw violence erupt. At least 37 people were killed with around 200 people injured. There was considerable damage to houses, shops, and mosques.

It was during this time that Trump was visiting Modi in order to cement relations with the Indian leader. While Modi was faced much criticism in India and abroad for his handling of the situation in India, and Kashmir, Trump was reportedly using this trip as an opportunity to show Americans that he was popular around the world. The trip was also used to agree on some deals between the countries.

Both the leaders have criticised for their ultra-nationalist policies which they have adopted, and a general undermining of democratic ideals.