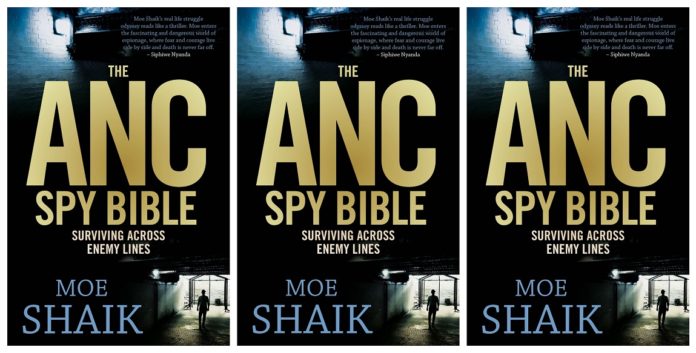 In his new book and memoir, Moe Shaik, former head of the South African Secret Service takes the reader through the days of South Africa’s late apartheid and transition past. The ANC Spy Bible also details Shaik and his brother’s relationship with the former president Jacob Zuma. In this extract, Shaik talks about operation Vula which changed the ANC’s underground units.

Operation Vula had its roots in Oliver Tambo’s decision to shift the political centre of the ANC from exile into South Africa. He was right to do this. Many of us viewed ‘exile’ as a requirement for survival, not as a necessary condition for victory. Tambo was concerned about the ANC’s lack of senior leadership on the ground to guide the revolution.

In 1986, he got his way by implementing Operation Vula, an operation known only to a select few. Tambo chose Mac Maharaj to head Vula. He knew that Mac was resilient and aware of the dynamics within the country. After two years of preparation, Mac and Joe slipped across the border from Swaziland to take up their task.

From the outset, Operation Vula injected new life into the ANC’s underground units, bringing command, coordination, connection and communication. The conduct and status of both Mac and Joe created purpose and urgency. They easily and discretely moved around the country, the cities, the suburbs, the townships. The previously lengthy and torturous communication lines were replaced by an innovative and real-time communication system. The benefits of having senior leaders in easy reach began to show. We were more efficient, more professional. It was exciting to be part of this new movement.

The underground was growing, and its work was far-reaching. Vula’s influence spread into the mass democratic movement, the trade unions, the activities of MK, and – via London and Lusaka – to the involvement of international sympathisers. It even spread into Nelson Mandela’s quarters at Victor Verster Prison, giving him the benefit of confidential contact with the exiled leadership.

Old ways of doing things were discarded and new systems brought a cohesiveness to the underground. There was a sense of a professional revolutionary ethic. Everyone was imbued and infected with a spirit of purpose and action. Historical differences were put aside, and comrades were united in a common mission. From the top down the ANC was constituted in a manner that reflected its nonracial character.

A specialised transport system was established that brought large amounts of weapons into the country from neighbouring states. Houses were rented and converted into weapons storage facilities.

The training of cadres in urban warfare increased.

Although the MJK intelligence unit was not integrated into Vula, we had a close working relationship with that operation. This presented challenges. For one, our intelligence unit was providing operational information to Vula’s high command without the specific permission of Jacob Zuma. I justified this decision on the basis that it was in the interests of keeping Operation Vula intact. This meant ensuring that the Vula high command had timely access to the files. It was a risk I was prepared to take. More importantly, by sharing intelligence with Vula, it meant that lives could be saved.

During this time Zoe and Rebecca left, much to my regret. Theyhad been loyal comrades, good at their work. I suspected they had had enough of my grumpiness and the isolation of the job. Some of our support operatives, such as Yusuf Mahomed and his partner Maude (both pharmacists that practised in Hillbrow), were transferred to Mac. They became a crucial logistical and support resource to him in his Johannesburg operations.

While I lost their expertise, I gained others. Along came ‘Sally’, a local underground activist, who joined Catherine in the analysis team. ‘Das’, an information technology specialist, brought a whole new perspective to data analysis, storage and retrieval. Having access to the Vula infrastructure and resources allowed Catherine, Sally and Milla to travel to London, and then on to Russia for training by the Komitet Gosudarstvennoy Bezopasnosti, the Committee for State Security, known by the acronym KGB.

On their way back from Russia, they underwent further training in Amsterdam by Conny Braam’s anti-apartheid operatives stationed there. All this was done in secrecy – a remarkable achievement.

Under Vula’s leadership a new operating model emerged. It was no longer necessary for lengthy training periods in exile. Now you could leave the country for short ‘holidays’ and slip behind the Iron Curtain for the necessary instruction. In this way trained operatives could return to the country to apply their new skills.

Contrary to the brusqueness of our initial meeting in London, Mac and I became close through our regular meetings. I enjoyed his intellectually combative nature. No silly comment or superficial analysis of mine would go unchallenged. He had a way of engaging in conversations that I described as ‘constructive deconstruction’.

He would first hear out my arguments using his intense listening skills, paying attention to every word, observing every non-verbal gesture reflected in body language and voice tone. Then, like a skilled surgeon, he would systematically dissect my argument, exposing its faults. Often the feeling was akin to undergoing surgery without an anaesthetic. If I survived the deconstruction phase without storming out nursing a bruised ego, Mac would patiently reconstruct the argument taking it to higher levels of insights. He was relentless in his demand for the logical discipline of the mind. I always felt a little on edge in such engagements. In time I came to appreciate the advice, counsel and guidance. He was painful in his tenacity but caring in his heart. I learnt much from him.

Many of our discussions went beyond our common disdain for petty personal ‘dirty’ intelligence that focused on the frailties of human behaviour. I was impressed by Mac’s breadth of knowledge on topics big and small. He had a unique ability to shape the tactics of the present according to the requirements of the future. We spoke at length about the role of intelligence in a democratic society. It had to enhance democratic freedoms and future democracy must, by necessity, place limits on the game of intelligence. We did not always agree on everything, but we enjoyed the discussions.

Joe, Mac’s deputy, fascinated me. He could be cantankerous but underneath lay a sensitive and deeply intellectual being with a ready smile. His love of life resonated with mine. He was one of the few people I knew who had transcended the trappings of race. He simply did not see race, colour or ethnicity. His journeys through the trials and tribulations of his life had stripped him of these prejudices. In a world and country so conscious of race, this was a rare accomplishment. Over various meals and at social outings, an endearing relationship developed between us. It continues.

In time, through the Nightingale’s files, I came to know of Joe’s reputation and his name. He was the revered and fearless commander known as ‘Gebhuza’, his real name, Siphiwe Nyanda. He too had experienced the vicious ways of Colonel Eugene de Kock. His younger brother, Zwelakhe Nyanda, had been shot dead by de Kock. For this killing, Prime Evil received the South African Police Star for Outstanding Service.

The book is published by Tafelberg and is available at good bookstores around the country.