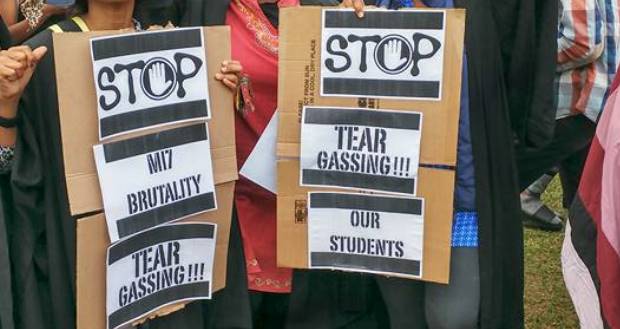 A 19-year-old female student described the ordeal of having heavily armed private security and SAPS police forcefully storming into students’ rooms and victimising them on Monday night while trying to break up a student protest at UKZN’s Westville campus.

Everything happened within a blink of an eye. Students were having a meeting at a place called the Pavillion, which is their usual venue where they hold meetings. They were preparing for a protest and there was a chaos around residences, students were making noise.

One moment everyone was chanting, the next there was an army of policemen. They had guns and shields; they saw students gathered, singing protest songs and burning some of the old fridges at a residence and started firing shots. The students started running around, making their way to different blocks at the residence and they saw heavily armed private security making their way to different blocks.

They banged on our doors and threatened to break them down if we do not open. For a moment I couldnâ€™t open the door because I was scared and confused. I was confused at the fact that a bunch of heavily armed men are trying to force their way into the female studentsâ€™ rooms so late. Some of us were half naked, I was in my short pyjamas and the thought of covering up didnâ€™t even cross my mind because I was traumatised already.

After a little while, I opened the door and eight men entered and demanded that we take out whoever we are hiding inside our rooms. They pointed guns at us and started searching for people in impossible places such as inside our wardrobes and under our beds. I was so disturbed that I even told them how traumatising the situation was, I was supposed to be writing today and having people raid into my room and threatening me with guns was uncalled for. My friend and I were shaking to the point that after they left, we sat down on the floor for a moment and drank water just to ease ourselves the shock.

With all that happened, the management hasnâ€™t said anything. Nobody asked if we were okay and nobody bothered to check if we needed anything such as counselling but I am not surprised because the management doesnâ€™t really care about students. The fact is that we are not okay and even if we wanted to address that with the management, it wouldnâ€™t change anything because they take everything lightly.

It was a very scary and traumatising experience and I was violated, yes, but this is UKZN and we are used to this.