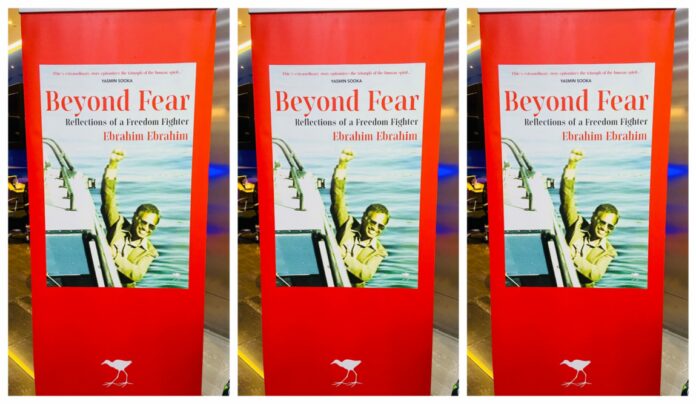 In the past two years or so of the pandemic, there seems to have been a resurgence of memoirs and memoir writing. It’s likely connected to the greater awareness of mortality and people wanting to tell their stories. One of the recent memoirs released is Beyond Fear: Reflections of a Freedom Fighter by Ebrahim Ebrahim. Ebrahim is the only anti-apartheid activist who was imprisoned on Robben Island twice.

Ebrahim was a member of the Umkhonto we Sizwe. He was imprisoned on Robben Island for fifteen years. Ebrahim was abducted by the apartheid police in Swaziland and tortured mercilessly in Johannesburg. He was imprisoned for a second time on Robben Island but was released in 1991. This was just four years before the “end of apartheid”. Beyond Fear is Ebrahim’s memoir that gives the reader a first-hand view into these known histories but goes deeper. It is about his personal struggles and the bigger struggles against the apartheid government for freedom. But the book is also about the story of his life after being a freedom fighter. Ebrahim was part of the democratic government serving in different roles including deputy minister of international relations.

What makes this memoir so poignant and important is that Ebrahim passed away in December 2021. This was just months before the release of the book.

During the May book launch, his friend and comrade Ronnie Kasrils said Ebrahim encapsulated the spirit of a freedom fighter. “The story of Ebrahim’s life reflects the life of the freedom fighters – people of so many generations in our country who gave their lives and sacrificed to overthrow colonialism and apartheid […] There are many of them. He [Ebrahim] reflects that and is symbolic of that. But I must say to everyone here that the title of the book: Beyond Fear is so apt in summing up comrade and brother Ebrahim. I’ve known many comrades and I salute them all. But he stands out as the most courageous of all because of his struggle and the need to free humanity. […] I’m not using hyperbole but he remains for me the bravest of the brave.”

Ebrahim’s book is gripping for many reasons. He takes the reader through the beginnings of his interest in the struggle. Ebrahim explains how he moved through the ranks of the African National Congress (ANC). Drawing from his experiences, Ebrahim explains the various internal differences that took place within the movement. Some of these were ideological (Marxism vs Leninism) and others related to methods of resistance (armed versus passive). Some of these played on a large scale but also within the prisoners on Robben Island.

An interesting anecdote is related to the formation of the Pan-Africanist Congress. Ebrahim relates how Nelson Mandela went to petition the Organisation of African Unity (OAU) to accept the ANC rather than the PAC as the liberation movement of South Africa. This causes a moment of pause for what the path to “liberation” would have looked like under different circumstances. This split was a lot more personal for Ebrahim as his brother Gora joined the PAC leading to significant ideological differences between the brothers.

The attention to detail in the book makes it an engrossing read. Ebrahim is able to recall with great accuracy the various operations he and his fellow uMkhonto We Sizwe comrades carried out as part of the armed resistance movement. The book moves from the armed struggle to the birth of his daughter, Cassia to his imprisonment, release, re-imprisonment, release, and birth of democracy. It draws to a conclusion with Ebrahim’s meeting of Shannon, the love of his life and the birth of their children and how he made a home after many years of struggle and loss.

The book finally ends with his cancer diagnosis. In the book Ebrahim expresses shock at the diagnosis as he never smoked. During the launch, his wife echoed his words from the book about a possible reason. During his imprisonment on Robben Island, he shared a poorly ventilated space with 60 other inmates who smoked a lot. There were also the hazardous conditions the inmates were forced to work in. Just months after his diagnosis, Ebrahim passed away in December, 2021 – not living to see his words out in the world.

There is an important balancing act that happens when reading and engaging with the stories and lessons from the comrades and freedom fighters of the anti-apartheid struggle. It’s necessary to ensure that their stories are told and understood. There are a number of reasons for this. Mainly it’s to ensure that younger generations understand what was lost and given up by these people for some of the freedoms enjoyed today.

On the other hand, this needs to be balanced with the acknowledgement that the concerns of young people today are not wrong. Many young people have been fighting the struggles of the current day. This ranges from fallists to gender-based violence activists to those fighting racism in schools and universities.

A middle ground is needed between acknowledging the struggles of anti-apartheid activists and how some of the concessions made at the “dawn of democracy” led to the current state of South Africa. That’s probably the best reason to read and engage with these stories – to understand and grapple with the lives and motivations of the freedom fighters of the anti-apartheid struggle. After all, Ebrahim touches on some of these concessions in the book.

In “Ebie” Ebrahim’s words: “To succeed, we can never allow fear to get the better of us. We must essentially be ‘beyond fear’”.

And that bravery and ”beyond fear” of Ebie Ebrahim and his comrades is needed now more than ever to build that just and equal South Africa.

Beyond Fear is part of the Exclusive Books May Recommended list.