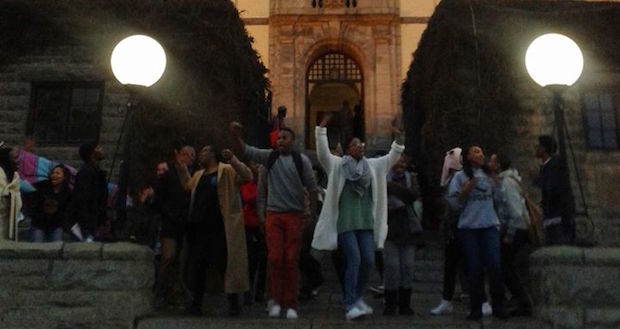 Questions of transformation in higher education are again in the spotlight, this time at Rhodes University, where the Black Student Movement (BSM) camped out at the universityâ€™s management offices, including the Council Chambers and the vice chancellorâ€™s offices, on Tuesday night.

The organisation is protesting against financial exclusions and asking for lower registration, tuition and residence fees, for cheaper printing and internet facilities, and for the lack of food and accommodation for students who cannot afford to go home over the school break to be addressed.

7:30am this morning at the main admin block. The Black Student Movement has been occupying Council Chambers at the…

The occupation follows a series of student protests concerning transformation in higher education this year, beginning with #RhodesMustFall at the University of Cape Town, and including #TransformWits and #OpenStellenbosch, which made headlines recently following the release of Luister, a documentary about the racism experienced by students at Stellenbosch University.

The BSMâ€™s protest has won the support of the United Front (UF), a political party launched by the National Union of Metalworkers of South Africa late last year. The UF described the occupation as “a challenge to the logic of a capitalist, neo-liberal and racist university that either profits off black life or else callously discards it”.

â€œThe crisis at Rhodes demonstrates how the right to education of black working class students is undermined by the user-pays logic that informs access to university education … This underlines the manifest inadequacy ofgovernmentâ€™s policy and fiscal allocations for higher education,â€ it said in a statement released Tuesdau.

The party also called for â€œincreased unity in action and the mass mobilisation of thousands of students behind the demands for decolonisation, transformation and decommodification of higher educationâ€.

Could we soon see a national student movement to transform higher education, or will these movements remain confined to their campuses? Tell us in the comments.