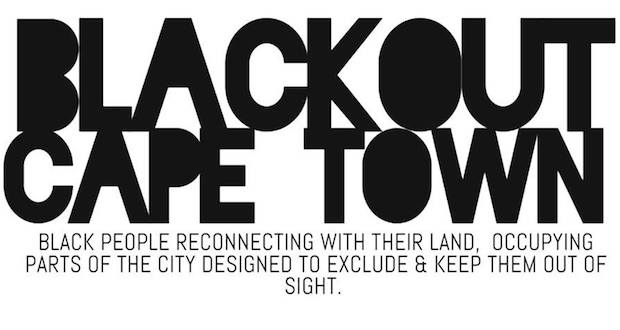 Over the past two weeks, posters titled â€œBlackout Cape Townâ€ have been circulating on social media, calling for an occupation of Clifton Beach and other areas around Cape Town.

The poster reads: â€œBlack people reconnecting with their land, occupying parts of the city designed to exclude and keep them out of sightâ€

If you cannot attend but would like to support others that want to, please use #BlackoutClifton to sponsor rides or share transport. pic.twitter.com/gGoMUP3LK9

The event comes in a time where there are increasing calls for the land reformation, outcries against gentrification, and rising incidents of racism at the presence of black people on South African beaches.

Last year alone, EFF leader Julius Malema was charged with contravening the Riotous Assemblies Act for a statement he made in 2014 calling on black people to claim all unoccupied land. Outside the Bloemfontein Magistrateâ€™s Court on 14 November 2016, he nevertheless stated: â€œWhen we leave here, you see any beautiful piece of land, you will like it, occupy it! It belongs to you! It is your land! It is the land of your forefathers.â€

#BlackoutClifton is not connected to the EFF, and it is unclear who the organisers are, but it has nevertheless sparked interest among many in the Cape.

The Daily Vox spoke to Ona Sebetlela, a student from the University of Cape Town, about her reasons for supporting the event. â€œIâ€™m going because for many years places like Clifton and Camps Bay have just been places of whiteness and places we as black people couldnâ€™t access, while beaches like Muizenberg were supposed to be for usâ€.

â€œSo Iâ€™m going to go disrupt the space there, to make a statement that you canâ€™t exclude us from these places and make us feel like we donâ€™t belong. To go to a place where theyâ€™re confronted with us being there â€“ to make them feel uncomfortable. Because they thought they could place us elsewhere â€“ and reserve all the nice things for themselves. But weâ€™re here, shem, and here to stay,â€ said Sebetlela.

The organisers of the event, whoever and wherever you are, we at The Daily Vox applaud you for you calls to decolonise exclusionary spaces.