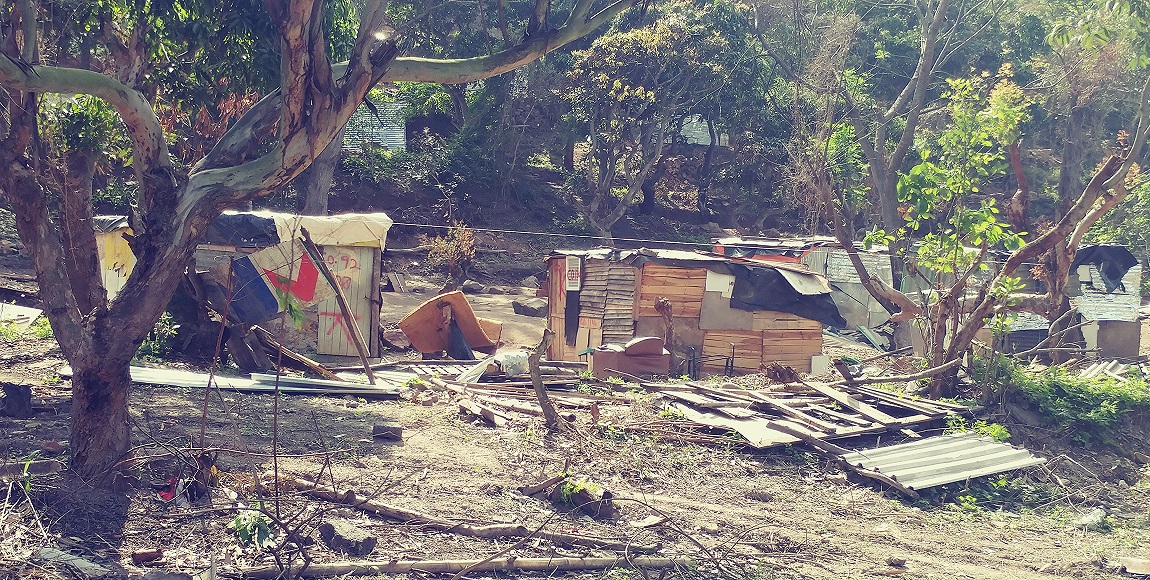 Fear, antagonism and plight of poverty is all that lingers for the shack dwellers of Blinkbonnie Road in Cato Manor, whose lives appear to have endured enough victimhood. Lizeka Maduna visited the settlement this week.

Walking into the strip of land in Blinkbonnie Road, one is welcomed by a striking smell of teargas and the remains of demolished structures. Earlier this week, the community protested for the right to erect shacks in the area, and were dispersed by police.

Now, people lie on mattresses outside, exhausted and fearful for their future. â€œWe haven’t eaten or bathed since yesterday, we’ve been fighting and will continue to fight,â€ said Siphiwe Sikhakhane.

Disputes between the municipality and the shack dwellers in Cato Manor dates back to 2016, when a group of people lost their homes and started clearing the green area in Blinkbonnie Road and started setting up their shacks. The Blinkbonnie Road residents have no access to water, electricity or toilets. Thin bare wires, illegally connected from neighbouring Wiggins Road, hang over the shacks or lie dangerously on the ground, provide dim lighting.

â€œWe are told by the municipality to stop illegal connection of electricity but how are we supposed to cook for our children?â€ Sikhakhane asked. Some structures have been demolished and the material wrecked. As in many informal settlements in Durban, the pathways in the Blinkbonnie Road settlement, erected among a copse of trees, are rock-strewn and uneven.

Tuesday, when residents held their protest, was a holiday for the children in the settlement. Some joined the group of adults chanting â€œSizabalazelâ€™izwe lokhokho bethuâ€. (â€œWe are protesting for the land,of our forefathers.â€) Women carried shields made of cardboard boxes and zinc sheets and wielded sticks while singing struggle songs. One woman, Zinhle Ngubane said they have been fighting since they lost their homes in neighbouring Cato Manor and continue to fight almost every day. â€œWe are treated as dogs, the municipality doesn’t care about us. Our police want us dead and if that’s what it takes, we shall perish here,â€ she said. Meanwhile, a group of men and women patrolled the other side of the wood, machetes and shield in hand. They sat together in groups, chanting and cracking jokes. Some structures here are marked with red paint. The community said these are the shacks of residents who appeared appeared in the Durban High Court in July, to sue for the right to remain in the area. These shacks have been allowed to remain standing by a court order, but residents believe they too will be demolished when the land invasion unit comes.

â€œThey have started targeting the houses of people whose names appear on the court order. They are also targeting specific people, one was beaten up and left to die,â€ says another woman who asked not to be named for fear of being targeted. One man stands with a shield made up of a masonite sheet and a stick. The word â€œAkufiweâ€ (let die) is written on it in large text, next to a drawing of a grave.

Most of the Blinkbonnie Road shack dwellers share the same story – with little education, they came to the city to find work and feed their families. With only unpredictable low-paying jobs to rely on, finding shelter soon became an issue. In the end, they found themselves in a rock-strewn wood, armed with sticks and cardboard shields, in a face off with police over a place to lay their heads at night.